What to read after... The Legend of Kevin by Philip Reeve and Sarah McIntyre

If your children are big fans of Philip Reeve and Sarah McIntyre’s brilliant books, like The Legend of Kevin, find out which other stories they might enjoy with these suggestions from Scott Evans, The Reader Teacher! Philip Reeve and Sarah McIntyre are a co-author/illustrator dream team and are best known for producing their hilarious and highly-illustrated fiction such as Pugs of the Frozen North, Oliver and the Seawigs, Cakes in Space, and The Legend of Kevin series.

If you know readers who have loved stepping into their amazing worlds of pugs, sea monkeys and killer cakes and are asking for more, check out these recommendations about What to Read After…

From the minds of multi-award-winning author Neil Gaiman and illustrator Chris Riddell comes Fortunately, the Milk…, a brilliantly bonkers and spectacularly silly story. Whilst Mum's away, Dad's in charge but there's no milk, so he has to go to the shop. Really, that's all that happens in this tale of why it takes him a very long time to get back again – or is it? Featuring a time-travelling stegosaurus, aliens, vampires, dinosaur police and the Queen of the Pirates, as well as a whole host of other completely unexpected adventures, not everything is as it seems…

In Bad Panda by Swapna Haddow and Sheena Dempsey, the creators of Dave Pigeon, everyone thinks that Lin is the cutest panda in the world. So much so that they ship her off to the local zoo, away from her beloved brother, to be ogled at by the masses. But Lin HATES being cute, and now she will do everything in her power to prove that she's the baddest, meanest, most un-cute animal in the zoo. This one involves comic-strip panels and PLENTY of panda-monium! 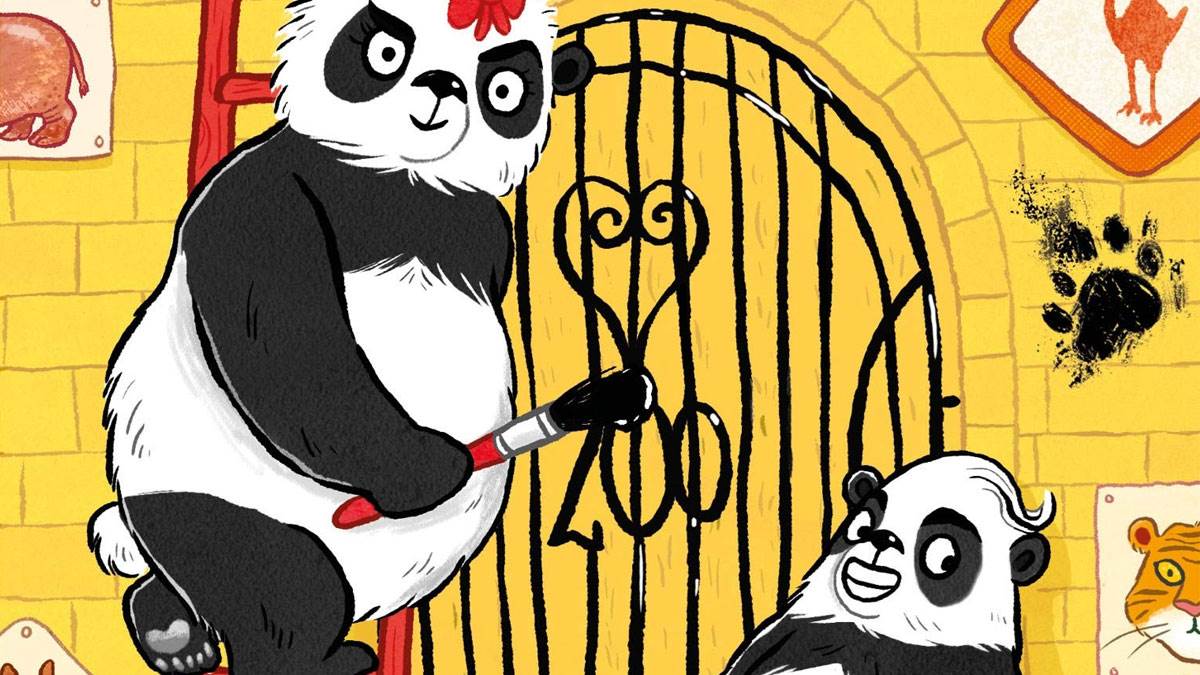 Illustration from Bad Panda by Swapna Haddow and Sheena Dempsey

Immerse yourself in an amazing galaxy of aliens in Space Detectives by Mark Powers and Dapo Adeola where best friends Ethan and Connor are spending the summer selling ice-cream on Starville – a human and alien-inhabited city orbiting Earth – but they dream of solving intergalactic crime as space detectives. When they witness a slimy green Tufted Grotsnobbler stealing a human girl's bag, and discover that the space station is hurtling on a collision course with the moon (eep!), it's up to them to save the day!

Sharing is caring in Rabbit's Bad Habits by Julian Gough and Jim Field. When Bear wakes up early from her hibernation, she decides to build a snowman. However, her grumpy neighbour, Rabbit, decides to build an even better one. But with an avalanche and a hungry wolf heading their way, will Rabbit and Bear’s friendship be put to the test and will it last? Beautifully illustrated, it has a classic feel, like a modern-day Winnie the Pooh story.

Super Happy Magic Forest: The Humongous Fungus by Matty Long is the start of an illustrated early reader novel series that takes the Super Happy Magic Forest world created in a number of picture books and presents a slightly longer story for readers who are starting to read chapter books. Wildly imaginative and bursting with colour illustrations to match, they offer a similar sense of original and quirky humour that are found in Reeve and McIntyre’s stories.

Illustration from The Adventures of Harry Stevenson by Ali Pye

Join a very small guinea pig on his very BIG adventures in The Adventures of Harry Stevenson by author and illustrator Ali Pye, which contains two short stories perfect for young animal fans. In the first story, Billy (Harry’s owner) and his family move house, and it’s all going well until Harry disappears. How will he make it back to Billy? In the second, Billy’s adventures become even wilder when he finds himself on an aerial adventure after gnawing through the party balloon string. With bold and bright illustrations, this book will definitely be one that is pulled out from your shelves to read and reread over again!

Mr Penguin and the Lost Treasure by Alex T. Smith, the bestselling creator of Claude, tells the story of a brand-new hero – Mr Penguin, adventurer and penguin. With the help of his spider friend Colin, Mr Penguin is called in to find the missing treasure somewhere in the Museum of Extraordinary Objects. Can he solve the secret codes and fight the ferocious beasts, all the while enjoying the fish finger sandwiches he loves so much? This is packed with slapstick humour, mystery and adventure.

Sam Wu Is NOT Afraid of Ghosts! by Katie and Kevin Tsang and Nathan Reed, is the first in a series of Sam Wu adventures in which Sam is scared of many things but is determined not to let anyone find out, especially the school bully who nicknamed him Scaredy-Cat Sam after an unfortunate incident on a school trip. Determined to prove his bravery, Sam sets off on a mission to show that he’s actually a fearless space adventurer. Full of fun, as well as characterful black-and-white illustrations and a plightful plot, this is one story that children will begin and then they’ll be wanting to read the whole series.

Welcome to the sleepy island of Penfurzy in Knights and Bikes by Gabrielle Kent and Rex Crowle, where nothing exciting ever really happens. Or does it? For adventure awaits Demelza and her new best friend in the whole world, Nessa, as they explore the island and go on a quest to uncover the mysteries of the Penfurzy Knights. With a honking pet goose sidekick, quirky islanders and a legendary treasure to find, it's up to them to ride their bikes, solve the puzzles before them, and face down danger with frisbees, water-balloons, feathers... and a toilet plunger.

An Alien in the Jam Factory by Chrissie Sains and Jenny Taylor is the first book in a hilarious, jam-packed new adventure series that stars Scooter the inventor and his top secret alien sidekick. Scooter has cerebral palsy but it doesn't limit him, especially his mastermind brain which is bursting with so many ideas and inventions. Spending every day inventing top-secret recipes in his family’s jam factory, he feels lonely and longs for a friend or a pet to share his success with. So, when a tiny alien named Fizzbee crashes through the factory window, she might just be the answer. Can they team up to save the factory from dastardly neighbour Daffy Dodgy, and keep Fizzbee a secret at the same time?

When Anna inherits a once-grand hotel from her great aunt, she's determined to restore it to its former glory. But this is no ordinary hotel, this is Hotel Flamingo by Alex Milway where all of her staff and guests are animals! This is such a sweet and entertaining story that will surely keep children engaged and have them asking to read the rest of the series! 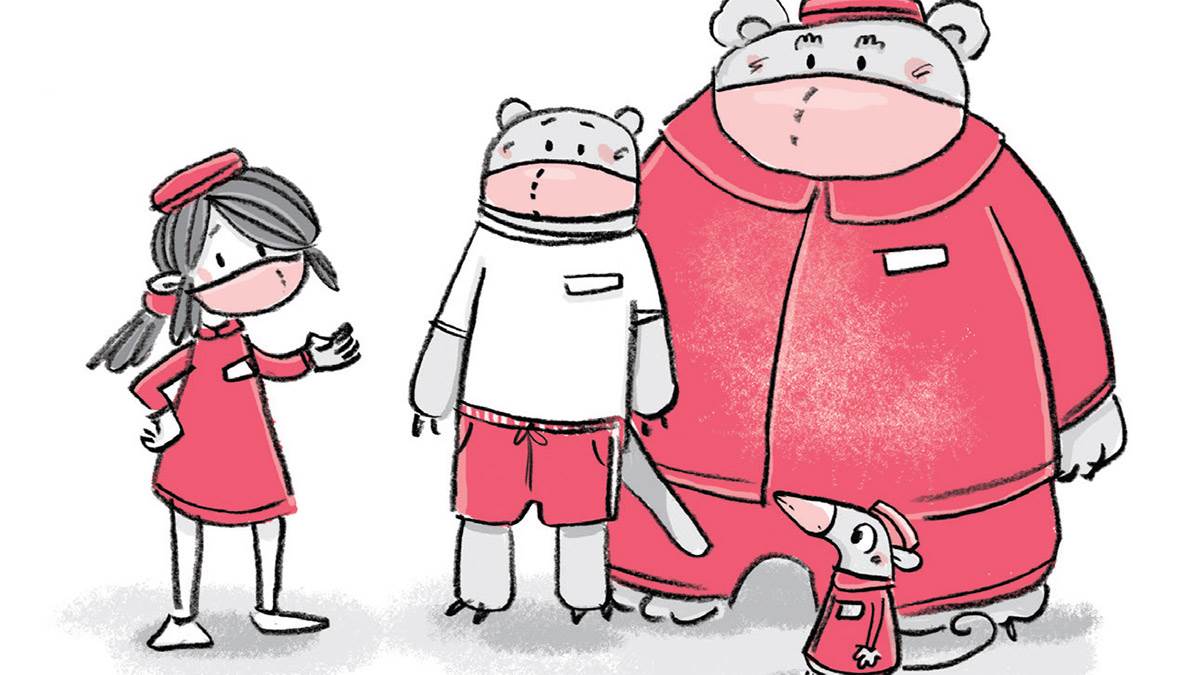 Lastly, welcome to The Nothing to See Here Hotel by Steven Butler and Steven Lenton, where being weird is normal for Frankie Banister and his parents who run the hotel. Hidden from human eyes, the hotel is the perfect getaway for magical creatures of all kinds. When one day, the goblin prince Grogbah shows up for a stay, the Banister family are in for more madness than anyone could have expected. Make sure to reserve your room to find out what happens in this fabulously funny adventure and you’ll be packing your bags to visit again and again!

Join in the fun!

You've heard our suggestions – now we'd love you to tell us yours! Do you know the perfect book for a fan of the stories written by Philip Reeve and Sarah McIntyre?

We'd love to hear which books you've enjoyed sharing afterPhilip Reeve and Sarah McIntyre! Let us know by tweeting us @BookTrust, with the hashtag #WhatToReadAfter!

Scott Evans is a primary school teacher, reading for pleasure adviser, and children’s books consultant, content creator, critic & influencer. He reads, reviews & recommends a range of children's literature on his website and YouTube channel, both called The Reader Teacher. You can follow him @MrEPrimary on Twitter. He also hosts #PrimarySchoolBookClub – a monthly Twitter-based children's book club, chat and vote.