We asked well known authors and illustrators to share the children’s books that gave them or their children comfort, helped them get through the tough times and help them grow.

The Story of Ferdinand by Munro Leaf, illustrated by Robert Lawson 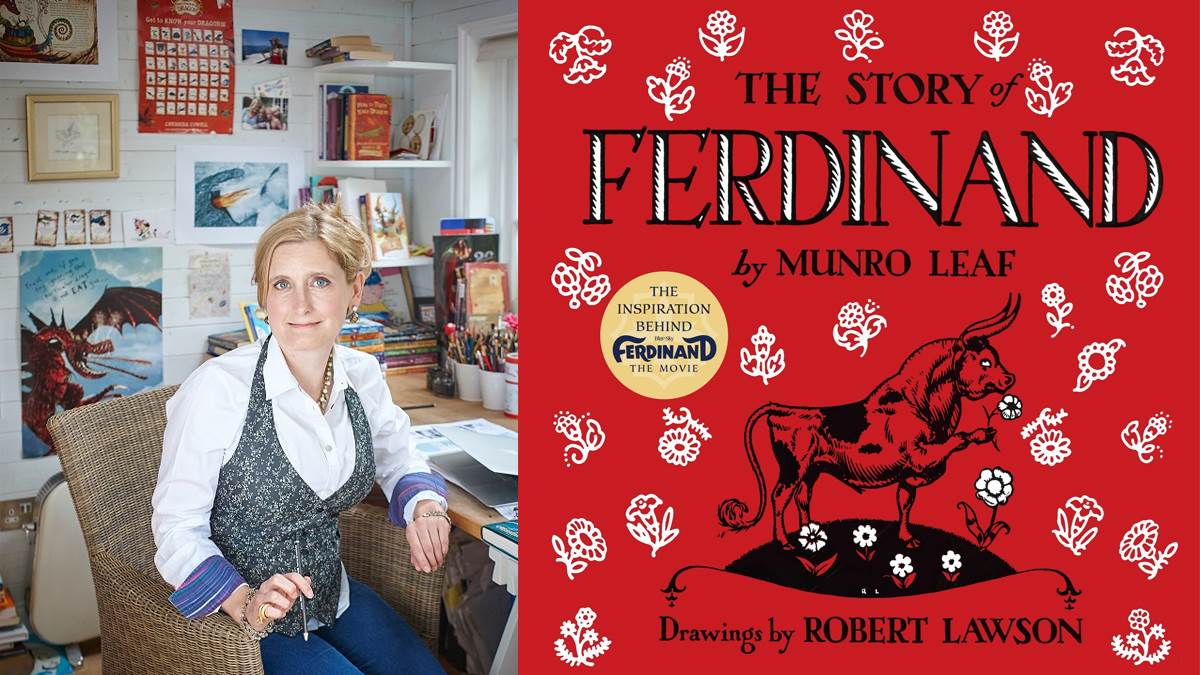 Cressida Cowell, author and illustrator of How to Train Your Dragon and The Wizards of Once, current Children’s Laureate

When children are questioned about their anxieties, some of the major issues that come up again and again are being bullied, concerns about fitting in with their peers, and loneliness.

These are areas which all children struggle with at some point, and for many children the issues will at times become acute, which is why all of those anxieties are major themes in most of my books.

Reading a book and finding that Hiccup (from my How To Train Your Dragon series) went through similar problems when he was bullied by Snotlout, and how he overcame that situation, is empowering for children. It makes them feel less lonely in their own predicament and also provides a framework to understand and discuss their feelings. Many children write to me and say that at times when they were feeling alone and friendless, Hiccup became their friend, and helped them through.

When I was a child, a picture book that helped me was The Story of Ferdinand written by Munro Leaf and illustrated by Robert Lawson. How I admired Ferdinand the bull's courage in sitting down and smelling the flowers in the bull ring rather than succumbing to crowd and peer pressure and fighting the matador!

One book that I think might be particularly helpful in reading with children, or for them to read on their own, is Wonder by R J Palacio. All three of my children read it when they were very different ages, so it works for teenagers as well as pre-teens. Wonder tells the story of August, a boy with a severe facial disfigurement starting school for the first time, and the story is told not only from August's point of view, when he is being bullied, but also from the point of view of the bully. It's a highly thought-provoking and helpful read, and a story wonderfully told. The Secret Garden by Frances Hodgson Burnett was an incredibly important childhood book for me – I could easily relate to Mary Lennox.

Like her I felt I had little control over my life, like her I collected up all the negative opinions and comments and made them part of me.

I both pitied her and admired her, she was a child hard to like but one who gradually earned my devotion. The Secret Garden taught me a great deal and beautifully explained the simple truth that without the love kindness and appreciation of others we cannot successfully grow.

Mary Lennox is neither passive nor sympathetic, but rather stubborn and curious, and it is these qualities that lead her to seek out the abandoned garden, which like her has grown wild with neglect. She sees the beauty in it and, as she nurtures it back to life, so she becomes a conduit for the healing power of the garden. It is a powerful and beautifully simple parallel, one a child can readily understand, and so elegantly written that, a hundred years later, the book still feels profound and utterly relevant. One of my daughters stepped up to demand a wodge of back pocket money. “What do you want it for?” I asked. “To buy a new copy of Hating Alison Ashley,” she admitted. “Mine’s fallen apart and I can’t live on this planet without being able to read it.” I shouldn’t have been surprised.

I knew she had a problem with the ‘perfect’ girl in the class. I just hadn’t realised how much comfort Robin Klein’s comedy novel was bringing her almost every evening, helping her through a difficult school year. I always found the Babar books by Jean de Brunhoff comforting when I was little. I discovered these books in friends' houses. They were a treat for me, because in my house we didn't have them. They were rather looked down upon, because Babar and the elephants dressed up, and seemed to live and enjoy living in cities and wandering about in parks. When I was that age, I lived like that. Babar lived in my world. And he dressed as I did, well not quite. And he spoke like I did, well not quite.

He and his whole family became familiar to me. I loved hearing about them, living their stories with them.

Where the Wild Things Are by Maurice Sendak I first discovered Where the Wild Things Are, by Maurice Sendak, as a teenager and thought it was absolutely perfect. At the time I was questioning what my next steps were – whether to go to university (which was the norm at the time) or go to Art School (which was what I really wanted to do).

Where the Wild Things Are made me realise that I didn't have to follow other people's expectations of me, and inspired me to be brave and do what I felt was right for me.

It was a massive turning point in my life. The year after I left school we returned for a prize giving. I'd won the English Prize and I requested a copy of Where the Wild Things Are as my reward. I still have that copy to this day.

No One Knows Where Gobo Goes by Mark Saltzman,illustrated by Peter Elwell Rob Hodgson, author and illustrator of The Cave, BookTrust's Time to Read book 2019

A book I read a lot when I was a kid was a Fraggle Rock picture book called No One Knows Where Gobo Goes by Mark Saltzman and illustrated by Peter Elwell, which was a hand-me-down from one of my brothers. Despite not knowing what Fraggle Rock even was, I was obsessed with this story about the mysterious Gobo, who had a special place he'd go and hang out by himself.

I found the idea of that very comforting, that it was okay to spend time by yourself. For me I felt very seen by the book, which was about not wanting to always be seen. The book that means so much for our family is Michael Rosen's Sad Book, with Quentin Blake's wonderful humane and humorous illustrations.

All families deal with loss at one time or another,what this story does so well is face sadness as a part of the universal human condition.

Through facing and sharing the sadness caused by the loss of a loved one, Rosen allows light to enter and humour too. This is a brave and honest book, written with great care and humanity, a huge amount of heart and wish to open conversations around what is often still an unbroached subject with young children. It has been a real gift to read it with my family.

The Cat in the Hat by Dr Seuss Joseph Coelho, poet and author of Werewolf Club Rules and If All The World Were...

Dr Seuss’s The Cat In The Hat taught me at a very young age to relax. I was a very nervous, scared child but reading about this “naughty” character opened up in me the possibility that everything would be ok.

That any mess could be tidied and that despite what my immediate environment might have been like, there was a whole world out there, where cats wear hats and where fun is had.

The Tenth Good Thing About Barney by Judith Viorst, illustrated by Erik Blegvad A long, long time ago, I had a beloved dog named Tonka. His death, when I was about 12, was my first experience of losing a loved one and I thought about Tonka sadly for a long time. Many years later I stumbled upon a book called The Tenth Good Thing About Barney, by Judith Viorst, illustrated by Erik Blegvad. "My cat Barney died last Friday" it begins. "I was very sad."

Reading this, I was amazed. This was exactly how I felt, with none of the platitudes that seems to accompany most writing about grief.

It felt good to read it. The boy in the story lists 10 good things about Barney... the tenth good thing always brings a tear to my eye: "Barney's in the ground and he's helping to grow flowers. You know that's a pretty nice job for a cat." I re-read this book every time I experience a bereavement. It's always a great comfort.

The School For Good And Evil by Soman Chainani Cerrie Burnell, author of the Harper series and The Girl with the Shark’s Teeth, and current BookTrust Writer in Residence.

As a child who couldn't read independently because of dyslexia, I have always been drawn to fairytales. When I was little, I was delighted by the courage and splendour of them, an imaginary world I could escape to and be the princess who escaped some terrible fate. But I was also fascinated by the twisted terrible darkness they portray. My daughter loves the modern retellings like Disney's Descendants or The School For Good And Evil by Soman Chainani, give which give equal space to the villains stories, letting them hold as much power.

I think it's so important for children to know that it's ok to make mistakes or have a bad day.

A series we both love (which realises this brilliantly) is A Series of Unfortunate Events by Lemony Snicket. The overriding theme that bad things will happen but love and family will get you through, feels very folkloric to me and I love the message that no one is entirely wicked or entirely noble.

A character we both find really anarchic and joyful is the fabulous Pippi Longstocking by Astrid Lindgren. She is the greatest, bravest most independent rebel. If you've had a tough day, it's lovely to step into Pippi's world where a child can live with a monkey and a horse and not bother with anything that doesn't bring her happiness - including school!