Chris Riddell is a prolific writer and illustrator whose work is familiar to both children and adults. He is known especially for his distinctive line drawings with their clever caricature, fascinating detail and often enchanting fantasy elements.

As a child, Chris admired the work of John Tenniel, the first illustrator of Alice in Wonderland, and E H Shepard, the illustrator of The Wind in the Willows and Winnie the Pooh. His interest in drawing was encouraged by his mother, when she gave him a paper and pen to keep him quiet during his vicar father's sermons!

It certainly paid off. Chris has won the prestigious Kate Greenaway Medal an incredible three times: in 2002 for Pirate Diary, in 2004 for Jonathan Swift's Gulliver, and for The Sleeper and the Spindle in 2016. His solo work includes the Goth Girl series, the Ottoline series and the picture books The Emperor of Absurdia and Alienography. The first Goth Girl novel won the Costa Children's Book Award in 2013. He received the Hay Festival Medal for Illustration at the 2015 Hay Festival.

Chris has worked widely with a variety of collaborators: Paul Stewart on the Muddle Earth, Edge Chronicles and Wyrmweald series; Neil Gaiman on The Graveyard Book, The Sleeper and the Spindle, and Fortunately the Milk, and Russell Brand on Trickster Tales: The Pied Piper of Hamelin. He has also illustrated A Great Big Cuddle: Poems for the Very Young by former Children's Laureate Michael Rosen.

In addition to his children's books, Chris is a renowned political cartoonist whose work appears in The Observer, The Literary Review and The New Statesman. He lives in Brighton with his wife and has three grown-up children.

As usual, Chris said it best with a drawing: 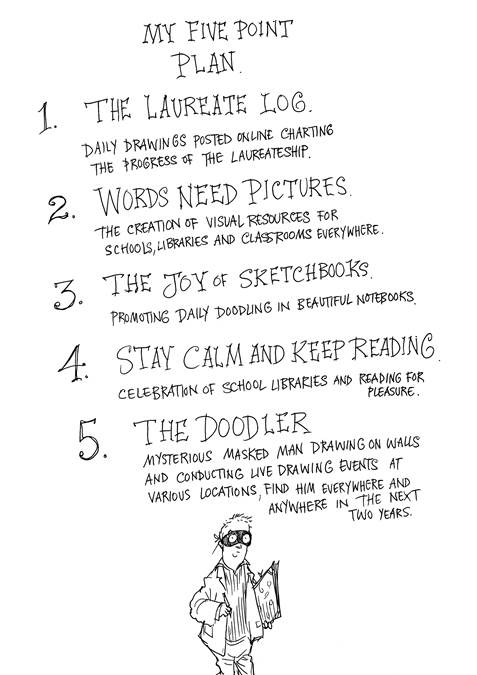 Upon becoming Laureate, he also added:

‘I am humbled to take on this role after the giants that have come before me. I want to put the joy of creativity, of drawing every day, of having a go and being surprised at what one can achieve with just a pencil and an idea at the heart of my term as Laureate. I want to make sure people have fun whilst addressing fundamental issues I care about passionately.’

Some books by Chris Riddell

The Emperor of Absurdia awakes one morning and can't find his snuggly scarf, so after checking with The Wardrobe Monster, begins to search for it.

Read more about The Emperor of Absurdia