Cerrie Burnell is our new Writer in Residence and wants to tell you about her own journey to becoming a reader and storyteller, and overcoming her dyslexia – and it's all because of fairy tales.

Hi, I am Cerrie and I have always had a really great love of fairy tales and this is why.

Now when I was little, I really really struggled both to read and to write. And that’s because I‘m dyslexic, which is a very, very long word but it basically means that you can’t recognise letters on the page. So even writing my own name was really tricky. And reading took years and years.

But I was very lucky to have two parents, namely my mum, who read to me every single night. And the stories which I loved the best were the ones that I didn’t have to learn by heart. And that’s where I think the magic of fairy tales really exists. Because everyone, really – people on the building site, people on the beach, people in a lovely café, people in a garden… Everyone knows the essence of fairy tales. It’s as if they already exist, somewhere in the air, and we all manage to learn and love them.

So when I was little, I really loved play-acting, pretending to be Cinderella, forgetting my glass slipper on the stairs, or pretending to be Sleeping Beauty, or Red Riding Hood, one of my absolute favourites (and I even had a gorgeous red cape which I’d wear even in the summer).

So fairy tales are really important to me because that is how I really became a storyteller. And once I was storyteller, I wanted to make up my own stories – but of course writing them down was more difficult.

I really believed I was Alice in Wonderland, or Tinkerbell, or Wendy from Peter Pan. 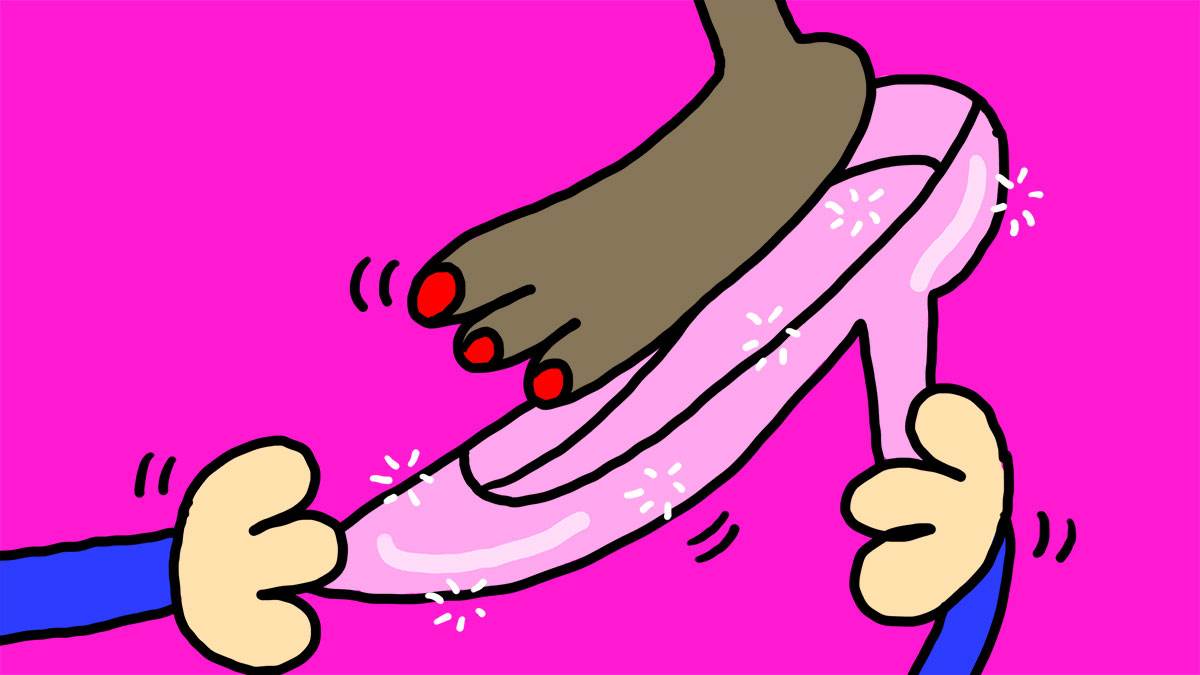 But one day, at play school, I realised I wasn’t quite the same as all these other fairy tale heroines I loved and admired. We were playing a game of Peter Pan, and I really wanted to be Wendy but someone else was already Wendy, then I really wanted to be Tinkerbell, but someone was already being Tinkerbell. And then there was this silence and everyone looked at me. At the time, because I’d been born without my hand, I’d been given a rather ugly and fairly useless hook – that’s right, an actual hook, a bit like a pirate, so can you guess who everyone suggested I should be? Who do you think it was? Yes! Captain Hook!

Really, from that moment onwards, all the way throughout my life, it made me aware that although I loved all of thse fairy tale girls, I was in fact a little bit different from them as none of them had a disability or looked quite like me. That became my motivation: to one day tell stories that reflected all children so that everyone could find themselves in a book.

Another story that I loved, that wasn’t a fairy tale, but was equally magical, was Rainbow Brite. She was brilliant and had an amazing horse and all her friends were different colours of the rainbow, and I could just lose myself in her world for ages.

By Sunday night, I knew every single word off by heart.

I went up to my bedroom (I was about six years old), and I practised what I thought was reading. So I held the book and I looked at the pictures and I said the words in a lovely clear voice, and then I went downstairs and said 'Look, Dad, I can read!' And he was so pleased and very relieved. But the next day, he took me to school and told my teacher that I could read and she was overjoyed; everyone was almost in tears in wonder. She made me stand in front of the class and read the first page and then she turned the page. And, of course, I hadn’t learned the second page off by heart and I just kind of blushed and felt very silly and everyone realised that I couldn’t read at all but I was brilliant at learning lines! Which was a great skill many years later, when I becamse a CBeebies presenter...

At that time, I was still really struggling to become a reader. And fairy tales and storytelling and acting out stories were my motivation, with a lot of support from school, home, outside of school and pretty much everyone, to finally – at the age of nine – being able to read by myself.

I would love to know what’s inspired you and your child to pick a book of their own free will.

Not because a teacher has asked them to, or because a beloved parent has encouraged them to read…

But maybe it’s because they’ve seen the film or TV show of that book and want to find out more about these characters.

Or perhaps it's the fairy tale that their grandmother has told them and they’ve never seen the book before.

Or maybe their best friend has read that book and they’re drawn to that front cover, and they want to find out what really did happen to that dragon…

Check out some of our favourite fairy tale books

Read the news story about our new Writer in Residence