8 adventure books for children that are perfect winter reads

Storms. Snow. Chills. Robin Scott-Elliot, author of The Tzar’s Curious Runaways, selects his favourite winter adventures – perfect for getting the heart racing and warming you up!

When the Tzar’s Curious Runaways, Katinka, Alexei and Nikolai, flee St Petersburg to begin their long and dangerous journey across 18th century Russia, they pack a bundle of furs and so unknowingly adhere to Rule No1 for reading any good winter adventure story: wrap up warm.

The very best winter adventures will have you shivering in sympathy with the chilly protagonists as they battle elements and villains – excellent villains seem to be a feature of winter books – so be prepared: swaddle yourself in cosy blankets, huddle beneath the duvet and lose yourselves in these wonderful winter worlds.

8 wintry books to lose yourself in From one of my favourite opening lines – 'Once upon a time, a hundred years ago, there was a dark and stormy girl' – onwards, this is a breath-taking book. Like in my book, The Tzar’s Curious Runaways, we are in Russia; albeit, 200 years later. Life remains desperately tough under Tzar Nicholas as his rule is enforced by General Rakov, a truly memorable and scary opponent for Feo. Rakov arrests Feo’s mum and it’s down to Feo, and the wolves that the family are rewilding, to rescue her mum from a St Petersburg prison cell. Revolution is in the air as Feo makes for the city, aided by a gang of village kids. 'The adults, they want us to be quiet and careful, but we have a right to fight for the world we want to live in,' says Feo. Hear, hear to that.

Read our book review of The Wolf Wilder 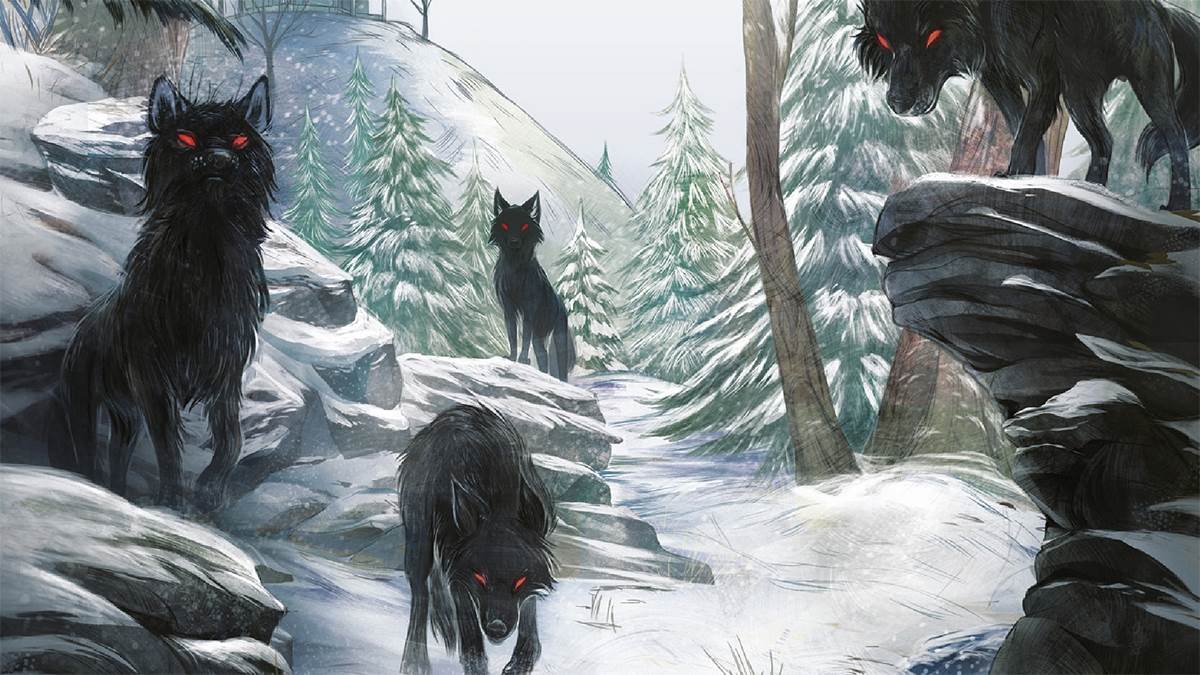 Illustration from The Wolves of Willoughby Chase by Joan Aiken

More wolves: except, this time, the wolves are on the other side. Aiken’s novel has been a bookshelf staple of so many childhoods and will be of so many more. It is rich in characters, setting and story, a reimagined 19th-century England. The bare bones of the plot – two girls (one, of course, an orphan) struggling to foil their wicked guardian’s plans – is familiar territory. But then that is by design. Aiken wrote this tongue-in-cheek, taking the mickey out of Gothic Victorian novels, and she does it so well. It’s a "just-one-more-chapter" book that you can’t bear to put down – and suddenly it’s night and you imagine you can hear wolves howling outside your own door... Aiken also delivers the best doctor’s diagnosis ever. 'What does she need, sir?' asks Simon of Doctor Field. 'Firstly champagne, she’s too weak to take anything else,' replies the good doctor. Hear, hear to that too.

Read our book review of The Wolves of Willoughby Chase

Emma Carroll’s debut is spooky, mysterious and chilling. What more do you need for a winter adventure (apart from wolves)? The setting of Frost Hollow Hall, the misery-enveloped and snow-shrouded estate on the edge of Tilly’s village, is wonderfully evoked. Just like Tilly, you are desperate to go and have a look while at the same time anxious about doing so. There is real stomach-flipping suspense in parts and the ghost scenes are laden with menace. 'The big question,' wonders Tilly near the start, 'is how I’m going to help Kit Barrington?' And the great thing as a reader is you’ve no idea either – you are never ahead of the plot, which keeps you turning page after page. The ending, without spoiling it, is perfectly pitched as well; the world is not perfect.

Pace is all-important in adventure stories and Murder in Midwinter whisks the reader along to a dramatic, tension-filled and very snowy finale (complete with heroic pony). On the bus home, Maya snaps a man with a gun threatening a woman in the middle of a busy London street. Unfortunately for Maya, the flash of her camera phone gives her away and now she’s pursued by a ruthless and dangerous criminal. She is sent from London to hideout with her aunt on a distant Welsh hill farm. Down comes the snow and soon they’re cut off… But are they alone? Make doubly sure the front door’s locked before reading this one...

Read our book review of Murder in Midwinter

5. An Eagle in the Snow – Michael Morpurgo

'Sometimes what seems right at the time, turns out to be wrong,' says the man Barney meets on a train during the Second World War. They are in a tunnel, hiding from an air attack, Barney having been evacuated from Coventry after losing his home to German bombers. The man fills the time telling Barney of the extraordinary story of a young man in the First World War: a hero, but one whose kindness may have played a part in starting the new war. The tale ends with a remarkable twist in the snows of Germany and is told with all you’d expect of a Morpurgo story.

Read our book review of An Eagle in the Snow

What to read after... Michael Morpurgo

Wolves are back and these ones are out to stop Mila and Rune, a mysterious young magician or mage, from tracking down Mila’s big brother. Oskar has been taken by a stranger and hurried through a land where winter has become permanent. Mila and Rune are in cold pursuit and Hargreave creates a terrific sense of tension and desperation as time begins to run out and Oskar is lost forever. The ending lives up to all that goes before.

Read our book review of The Way Past Winter

7. The Lion, the Witch and the Wardrobe – C S Lewis

Illustration from the front cover of The Lion, the Witch and the Wardrobe by C S Lewis

'I tell you,' says Peter early on in C S Lewis’s classic, 'this is the sort of house where no one’s going to mind what we do.' And what child (or adult) wouldn’t at very least like to stay there for a while. Lewis can be preachy and some of his decisions, like the one that that girls are not allowed into battle, really grate. Nevertheless, this is, at its heart, an utterly wonderful adventure that thrills from start to finish. And it’s got wolves (bad ones, this time).

Read our book review of The Lion, the Witch and the Wardrobe

Illustration of Tintin by Hergé

I grew up with Tintin and was so pleased when my own children took to his tales of global derring-do. It was Tintin who first made me want to be a journalist. It is not only the stories that I loved, it’s the artwork too, and nowhere more so than in Tibet. There are, like any story of this age, moments where Tintin dates badly, but throughout the series there is an underlying message of friendship – and friendship that should not be interrupted by national barriers. Here, Tintin travels to Tibet convinced that Chang, a boy he met in a previous adventure in China, has survived a plane crash. That there is a good side to everyone is a common theme for Hergé, and here even the much-feared abominable snowman is not what most presume him to be.

What to read after... Tintin