Wouldn't you love to be able to talk to animals? Blue Kangaroo and Polly Pecorino author Emma Chichester Clark shares some of her favourite stories where animals have the gift of the gab... 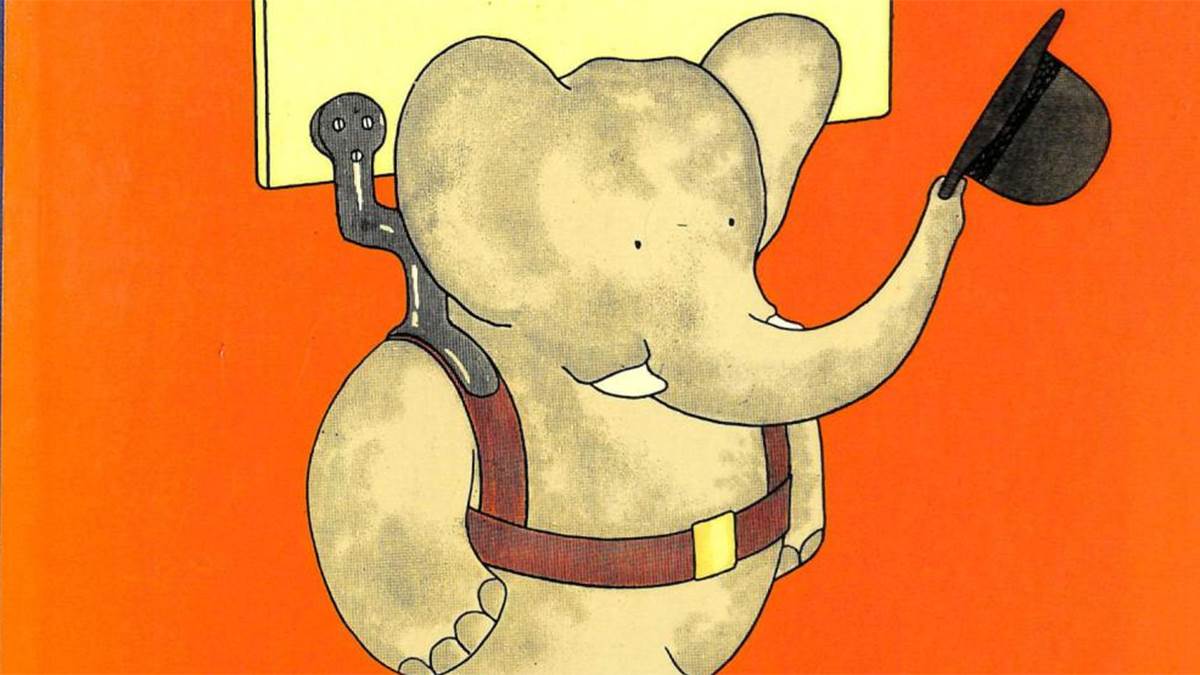 I seem to have written a few picture book stories where children talk to animals and the animals talk back. Recently, I wrote a longer book for older children called Polly Pecorino: The Girl Who Rescues Animals, in which a little girl rescues animals and can communicate with them, but that is a different kind of thing because in that case it is her special talent, and they are not speaking the same language.

1. The Story of Babar

The first time I was aware of a person talking to an animal in a picture book was in The Story of Babar by Jean de Brunhoff. I remember how strange it looked to see the little old lady with the large elephant. Babar had become an orphan, his mother having been shot by hunters, and the old lady is kind to him. She provides him with all the tools he will need for his adult life including clothes and a tutor, and when he becomes the King of the Elephants, she is his loyal support and advisor.

I have to include Alice's Adventures in Wonderland with Alice Through the Looking Glass by Lewis Carroll here because I absolutely love them and because the chatter between Alice and so many varied and extraordinary animals is almost relentless – from the White Rabbit, the Dodo and other members of the Caucus Race, the enigmatic caterpillar, the grinning cat and many more in the first volume to the even stranger, more dreamlike creatures of the second volume – Through the Looking Glass.

All the animals in both books have strong opinions about everything and are fairly argumentative, particularly the Mad hatter and the March Hare, while Alice holds her own and succeeds in keeping a cool head. 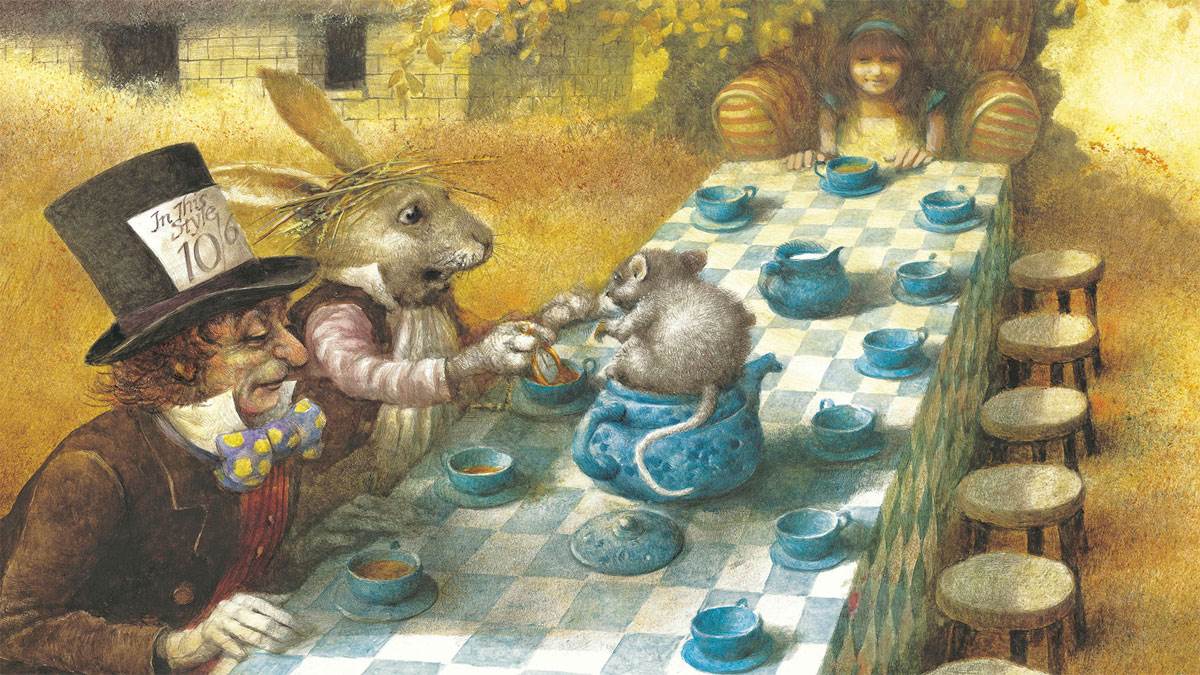 Another book I loved as a child, and still do, was The Happy Lion by Louise Fatio, illustrated by Roger Duvoisin. The Happy Lion lives in a lovely French zoo and so long as he is safely in his enclosure, everyone stops to say hello to him. But one day, the gate is left open and the lion decides to take a stroll, greeting familiar faces on his way,

But to his dismay, the people he thought were his friends, all run away screaming, and throwing their hands in the air. He is astonished by their hostile behaviour, culminating in the arrival of the Fire Brigade with their fire hose being aimed at him. Fortunately, the Happy Lion’s true friend, François, appears.

4. Where The Wild Things Are

Where The Wild Things Are by Maurice Sendak is perhaps an odd one out on this list because the creatures who speak to the little boy, Max, are not really animals. They aren’t humans either though – they are a kind of monster, with paws and scaly feet and indeed some human-looking feet, and horns and jagged teeth.

The little boy, Max, is angry with his mother who has sent him to his room. His reaction is to take himself off – to be independent and self-sufficient in an imaginary world where he sails away in his private boat to the place where he meets the Wild Things.

On one level it can be a story about facing fear and being brave, but it is also about an angry child facing his demons, raging until his fury is spent, and then remembering the thing that he needs most –to be back ‘where someone loved him best of all.’ 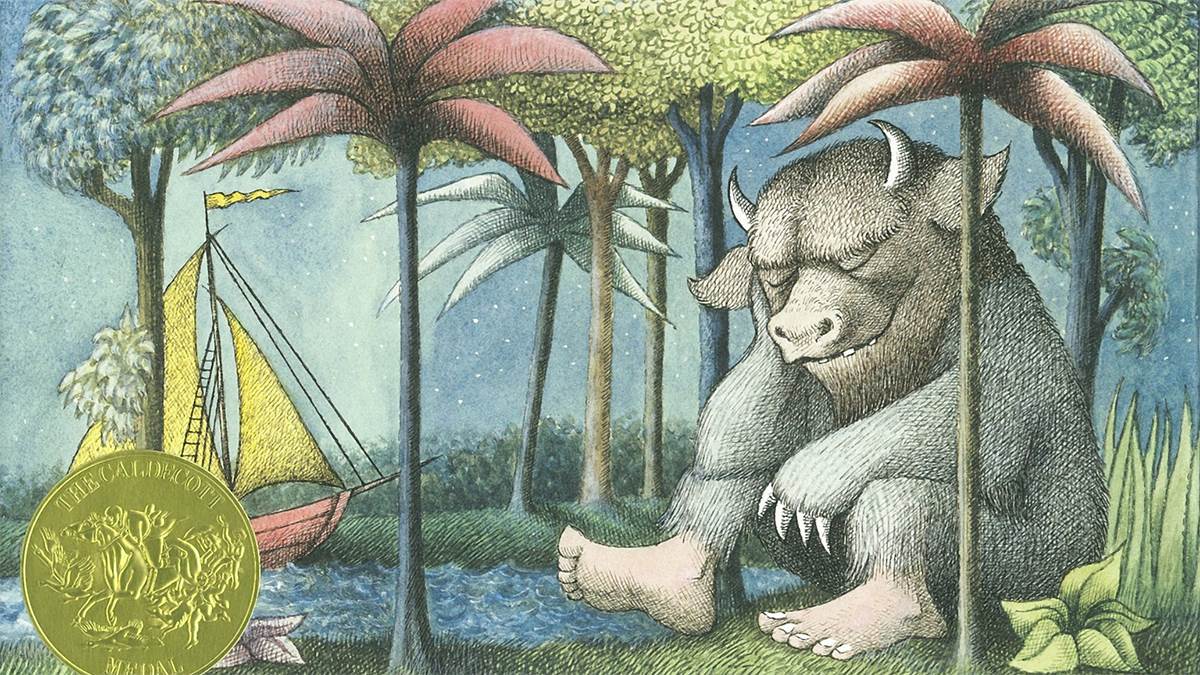 5. Clever Polly and the Stupid Wolf

Clever Polly and the Stupid Wolf by Catherine Storr is a very satisfying set of twelve stories about a clever little girl who has no difficulty in out-witting a not very clever wolf. The dialogue between them is direct and funny as the hopeless wolf, determined that he should eat Polly, returns over and over again with yet another foolish idea about how he is going to go about it. Polly, ever practical, thwarts each attempt quite gently and sensibly, and perhaps, even, sympathetically, and we can’t help hoping that the wolf will keep trying.

One of the best dogs ever is Courtney, in the book by John Burningham.

He is a marvellous large hairy creature that nobody wants until two children manage to persuade their parents that he is the one for them. Courtney becomes indispensable – cleaning, dusting, hoovering, mowing the lawn and dancing with the children. In a moment of heroism, he rescues the baby from the burning house.

There is no actual conversation between Courtney and the family. We just assume it happens, particularly with the children. There is palpable communication, certainly, in every picture, and an unforgettable deep bond between them that is truly touching.

In The Last Wolf by Mini Grey, Little Red is a feisty child with a pop gun and a lunchbox, on her way to catch a wolf. She is just beginning to lose her nerve in the dark gloomy forest when she stumbles on a door and finds herself face to face with a wolf. He is, in fact, the last wolf left in the woods, and he lives with the last lynx and the last bear.

Little Red listens as they tell her about the way their lives have changed – the loss of habitat, the loss of flowers and bees and passing prey, and the way they have to scavenge to find anything to eat, and she comes up with a plan – the perfect plan for the times we live in.

She starts a campaign to plant trees and make a forest where all wild creatures will be welcome.

Aunt Amelia by Rebecca Cobb is another favourite of mine. Aunt Amelia is a large green crocodile wearing a flamboyant pink hat and pink and white candy-striped dress. She turns out to be every child’s dream babysitter, much to the surprise of her two charges whose expressions change from thoroughly sullen to smiles of sheer delight and relief as they realise that anarchy is the order of the day  - and that the list of instructions left by their parents for Aunt Amelia leave room for many interpretations.

After an extremely busy time we see the children asleep in Aunt Amelia’s arms and the next morning there is a mad rush to restore the house to order before the parents return.

Anna and Otis by Maisie Paradise Shearring is a lovely story about friendship and judging people by their appearance. Anna’s best friend is a large yellow and red snake called Otis.

Anna decides they should go and explore the town together, but Otis has his doubts because he has learnt from experience that some people are scared of snakes.

But Otis and his instincts are right. The town reacts badly. Through gentle persuasion and Otis’s own determination not to let Anna down, they manage to find ways to reveal some of Otis’s unique talents and charming personality, and soon, the people realise their mistake and are won round. From then on, they do all they can to make Otis feel very welcome.

Caleb and Kate by William Steig, is the last book on my list and probably my favourite. It’s a bit of a cheat because the dog in the story never actually does speak to Kate. We desperately want him to, and he desperately tries to, but he can’t.

Caleb, a carpenter, has just had a storming row with his wife, Kate, and walked off into the forest where he falls asleep under a tree, having first remembered how much he really loves her. While he is asleep, a witch appears and tries out a new spell on him that she has just learnt, and Caleb wakes up later to discover he is now a dog.

Eventually, Caleb, the dog, is given a chance to defend Kate when some villainous robbers attack the house and, in the affray, he is magically restored to his former self and he and Kate are able to live together again, happily ever after.

I know I shouldn’t even think it, but I really wanted Kate to end up with the lovely ginger haired dog.

Who's your favourite talking animal? Tell us in the comments or on Twitter @BookTrust!

Thank you to everyone who donated to our Chistmas appeal

You helped send suprise book gifts to 16,000 children and made them feel special.