Are you in need of inspiration and feel-good news? Then meet the young people that are filling author Laura Wood with hope.

Vote for Effie is a book that I’m incredibly proud of and I’m so, so excited that it has been shortlisted for the Blue Peter Book Awards 2020. Vote for Effie was a hard book to write but I felt like I needed to write it, because I was so utterly inspired by all the young activists I was seeing in the news, and meeting at schools all over the country.

I started writing the book straight after the Women’s March in 2017, when – in the scariest of times – the image of so many young people marching against bigotry and division was the most moving thing I could imagine. I started to notice how politically engaged kids were, how much they CARED about the world around them. I wanted to write a book that was full of that feeling of hopefulness and optimism, that captured some of the brilliant ideas and initiatives that were being brought to life by young people all over the world.

I have included a list here of some of the young activists that I’ve found especially inspiring over the last couple of years, although there are many, many more out there. What I love about this list is that it shows us not only that young people have something to say, but that the world can be a better place when we listen to them. I hope that all of Effie’s readers feel inspired to make their voices heard! 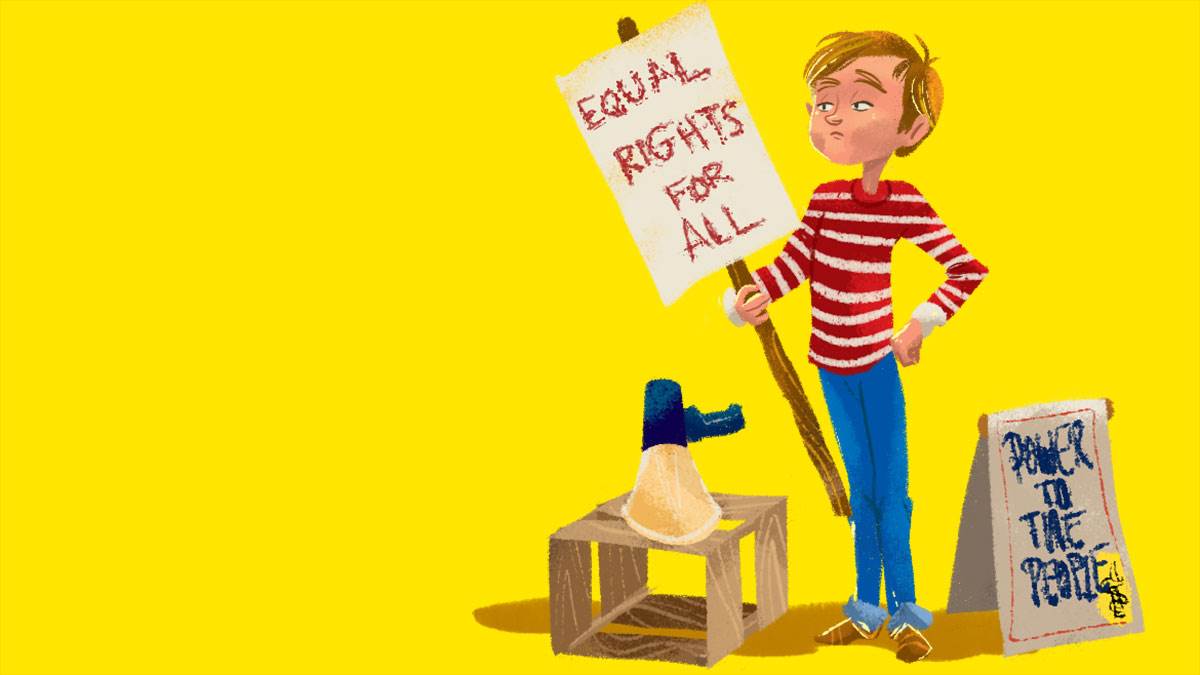 Amy and Ella are 16- and 14-year-old sisters from Nottinghamshire and they’re on a mission to get people, businesses and schools to take on a “plastic clever” approach to reducing single-use plastics.

The girls say that their desire to make a positive change started when they began studying the UN Global Goals about a year ago. Inspired by what they learned and wanting to make a change, they established the charity Kids Against Plastic, and so far they’ve picked up over 60,000 pieces of single-use plastic litter and developed their own app to log it in. They’ve even done their own TEDx talk and as part of their work for Kids Against Plastic, they’ve made over 50 cafes, schools, businesses, festivals and councils Plastic Clever.

I think it’s amazing to see young people fighting back against climate change. Amy and Ella may have built up a whole charity, but they also want everyone to know that the smallest actions can make a difference. I think they’re an incredible inspiration, and you can find out more about the amazing work they’re doing at their website.

Greta Thunberg: Inspiring us to act on climate change

Over the last year, I have been so inspired by 16-year-old Swedish environmental activist, Greta Thunberg. Although Greta is now a famous face, known the world over, her journey as a political activist started out small. Between August and September 2018, Greta protested every day outside parliament, demanding that the Swedish government reduce carbon emissions. I think it’s amazing to compare the pictures of Greta protesting alone, to the ones we see now of her leading thousands and meeting with world leaders.

'...you only talk about moving forward with the same bad ideas that got us into this mess, even when the only sensible thing to do is pull the emergency brake. You are not mature enough to tell it like it is. Even that burden you leave to us children.'

One of the biggest things I wanted to address when writing Vote for Effie was the idea that young people, but especially girls, are often told that they should be quiet. Boys might be called brave or assertive, where a girl is more likely to be called bossy or loud. I think Greta is such a wonderful example of what can happen when girls speak up, and why we should all be listening. Watch Greta’s speech

Amika George is 20 years old and has spent the last three years fighting for free sanitary products for disadvantaged teenage girls with her #FreePeriods campaign, which she founded while she was still at school. Amika began her campaign after she read a report that stated there were girls across the UK who could not afford menstrual products during their period, and who were missing school as a result. The #FreePeriods campaign isn’t just about making menstrual products readily available to all, but also about overcoming the taboo of talking about periods in the first place. In March this year, thanks in no small part to Amika’s campaign, the chancellor announced that from early 2020, every child in England will be able to access menstrual products when they need them, as free products will be provided in all schools and colleges.

In December 2017, Amika organised a protest outside Downing Street that was attended by over 2,000 people. I think she’s such a great role model for young people, showing that you don’t need to be a grown-up in a position of authority to make change happen. She saw something that she knew was wrong and she decided she wanted to do something about it. That’s an idea that’s absolutely at the heart of Vote for Effie.You can find out more about the #FreePeriods campaign on the website.

Mhairi Black is a Scottish politician who has been the SNP Member of Parliament for Paisley and Renfrewshire South since 2015, when she was 20 years old. She’s the youngest Member of Parliament elected to the House of Commons of the United Kingdom since at least the Reform Act of 1832. She has been extremely vocal about unemployment and the need for food banks, and she made a brilliant and scathing speech about this that went viral, viewed more than ten million times in under a week.

Mhairi is someone I definitely thought about while I was working on Vote for Effie. I think it’s so inspiring to see a young woman in parliament, one who speaks out against injustice and who is dedicating herself to public service. I think it shows young girls what is possible for them, and I hope that MPs like Mhairi soon become the rule, rather than the exception.

Watch her first speech in the House of Commons

Havana Chapman-Edwards is an eight-year-old-girl who joined the National School Walkout for gun control change in America. She was the only student who walked out of her elementary school in Virginia, and a photo of her sitting alone that day quickly went viral on social media. It’s not just this initial action that makes Havana such an inspiration, though. Building on the attention, Havana was determined to make a difference, and she started a GoFundMe account to finance a book club. On the page, she explains:

'Every month, I am going to host a book club and read aloud a book about an amazing female black role model. Girls and boys need to see strong black females in their books. I call these women and girls “sheroes".'

But that wasn’t the end of Havana’s fundraising. She teamed up with fellow activist Taylor Richardson to raise $20,000 to buy toiletries, clothing and books for girls at the St Bakhita Orphanage in Ghana, and Havana plans to travel there herself next year.

Havana is a shining example of what young people are capable of. I think it’s so inspiring to see her making such a difference. I love that she is vocal about her ambition to become an astronaut, and there’s no doubt in my mind that she can achieve whatever she wants. I find it really moving to see her expressing herself so confidently and that’s certainly something that I wanted to capture in Vote for Effie. Check out Havana’s GoFundMe

Noga Levy-Rapoport: Speaking up about climate change in the UK

On 15 February 2019, Noga led London's first climate strike march – though that had not been the plan from the beginning! The February strike day saw thousands of schoolchildren and young people walk out of classes in London and it seemed like they might need some direction. As young protesters grouped together on the grass, Noga took charge and decided to lead the others on a march to Trafalgar Square. Once they arrived she was asked to speak and her passion and enthusiasm stirred up the crowd.

On 20th September 2019, Noga hosted London's global climate strike, the largest climate protest in UK history, with 100,000 protesters in the capital and 350,000 attending strikes across the country.

I think it’s incredible to see and hear how passionately Noga speaks on the issue of climate change. I love that she saw that someone needed to step up and take charge and that she wasn’t afraid to do that, her fearlessness is inspiring. If you want to hear more about the strike and Noga’s work in her own words, I really recommend listening to this brilliant radio programme all about her.

Mari Copeny: Running for President in 2044

When she was only eight, Mari Copeny wrote a moving letter to President Obama about the Flint water crisis. Not only did Obama reply, but he came to Flint to meet with the people there, and he eventually signed off on $100 million funding to help repair the city’s poisoned water system. Mari is known as ‘Little Miss Flint’ as she continues to fight for her city, and raise money to tackle the problems they are still facing. Now aged 12, she is a fierce advocate for change and she uses social media to share her message.

Mari has said that she’ll be running for President in 2044, but, until then, she wants other kids to know 'you're never too young or too small to change the world.' I think Mari is an enormous inspiration. She hasn’t let being young stop her from being heard. When people weren’t listening, she didn’t give up… She made more noise.

I love her confidence, her intelligence and the sense of empathy that drives all of her efforts. I see these qualities so often in the children I meet while visiting schools and it makes me feel so hopeful. These girls really are the leaders of tomorrow.

If you would like to see why Mari is so amazing, and why I think she and Effie would be best friends, you might like to watch this video...