Where does best-selling author Karen McCombie find ideas for her books? Sometimes it's VERY close to home!

Like every author, I pick up shiny snippets of inspiration from here, there, everywhere and wherever.

For example, I might overhear a conversation between schoolgirls on a bus, ranting about a bully that's been bothering them, or maybe some insanely funny thing that happened at break-time. 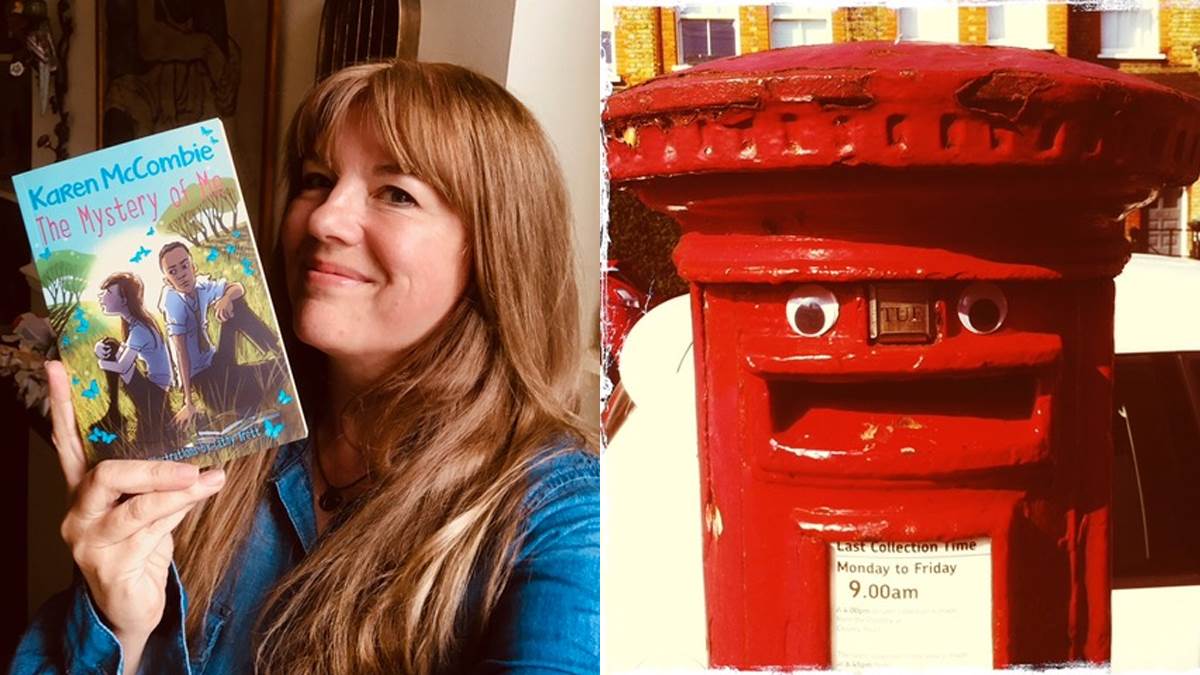 Perhaps some boy told me a crazy little story when I was doing a school writing workshop, and I've played around with it till it turned into a bigger idea.

It could be a dumb and cute thing I've seen and snapped for Instagram (like the postbox at the end of my road, which has a pair of big, googly eyes stuck above its mail-slot mouth!).

Variations, slivers and snatches of all these things can end up in scenes in my books.

Speaking of scenes, The Mystery of Me opens with main character Ketty in hospital with a serious head injury... This first chapter is based on a dramatic event that happened to a friend of mine when we were both teenagers. He was knocked off his bike by a car, and left in a coma. I visited him in hospital during the weeks of his recovery and hung out with him at college when he finally started back. I vividly remember how difficult it was for him when he couldn't remember words, never mind actual memories from around the time of the accident. He also found it really difficult when people treated him differently, as if he were made of glass. Then there was the plain old gawping and whispering behind hands... It made him feel like he was an alien, wibbling down the corridor on tentacles, instead of just a teenage boy with a bit of a scar on his forehead.

I thought about all of this and decide it to make it Ketty's experience, after her own accident.

As for the accident Ketty itself... Well, one day, my daughter Milly came home from a geography field trip to the seaside, where her class were studying coastal erosion or some other geographical bobbins.
"How did it go?" I asked, as she mooched in, dumping her damp rain jacket and sandy rucksack on the table.
"Rubbish," she muttered. "It rained, and we weren't allowed to go to the chip shop. Then the teachers went mental at everyone on the coach coming back 'cause they were mucking about so much."

As Milly disappeared to her room, I started mulling over what she'd said, found my notebook and began playing the author game of 'What If?'. I mean, what if students were mucking about on a school trip, and there was a crash? What if only one student was seriously hurt, and everyone else felt bad for her, since they ended up with hardly a scratch? What it the main character has forgotten something absolutely crucial about the crash, and about her life before it?

All the 'What If?'s started tumbling in faster and faster after that, and the whole plot of The Mystery of Me came about really quickly. So I owe my daughter a huge thank you for her random remark sparking off a whole book!

Actually, now I think about it, I owe my daughter many, MANY huge thank yous, since so many things she's said and done over the years have meandered into my stories. Sometimes I just use them as tiny details (a joke we shared, cute spacebuns she once wore), sometimes it's a setting (a petting zoo we visited when she was younger, a birthday party she had), and sometimes – as with The Mystery of Me it's a small nugget that's actually the key to a whole novel.

But hey, maybe I won't point that out to Milly, or she'll cross with me for stealing all sorts of bits and bobs of her life! So it'll just be our secret, right? You won't tell her, will you? And I promise to stop doing it, honest.

It's Milly, home from school. She's smiling, as if she's about to tell me something funny from her day.

I can't help myself; I'm an author, a gatherer of stories, a magpie mum.

"What's up?" I ask, my eyes widening, fingers itching for my notebook