I do love a good fright. I’ve always had a fondness for scary stories, either from the books I read as a child or the films I watched. The downside to this hunger for horror was my wild imagination – stories stayed with me. Monsters inhabited my mind when I went to sleep at night, bringing with them nightmares and a tormented night’s sleep. It was for this reason I was that child who often needed the landing light left on, the door ajar. I needed to feel safe. I needed a little bit of light with my dark. 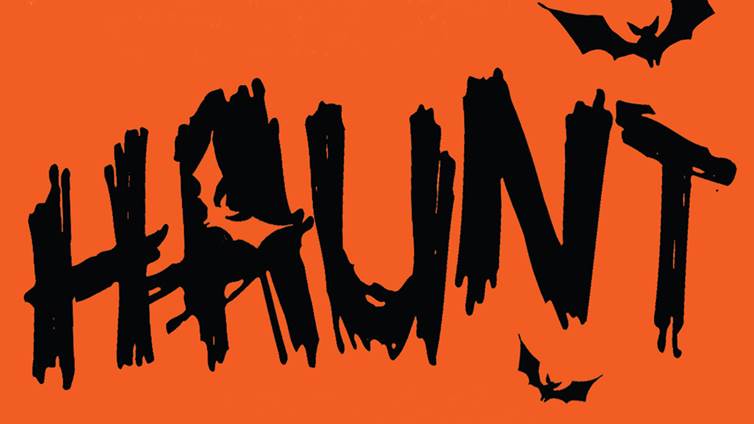 That's why I wrote Haunt: Dead Scared – a little bit of light with my dark. There's a lot of young adult literature out there these days which is dour, dystopian... miserable, for want of a better word. I didn't want to write something depressing, even though I knew it would be a ghost story, with plenty of shocks, twists and sinister happenings. That's where humour comes in. A well-placed fart joke can help alleviate any tension in a story, just like in real life. Horror and hilarity can live comfortably alongside one another, like the flipsides of the same coin. With that in mind, Haunt was always going to be a black comedy.

I often think back to my teenage years as being the most formative in my life. We go through so much in high school: losing and gaining friends, first loves and broken hearts, board games and bullies (kids and teachers). OK, so the board games bit might just be me and my mates, and a select few of you who are hardcore gaming nerds just like me (respect). But all of these events and encounters helped make me the professional daydreamer I am today.

Writing the Haunt novels was a departure for me. My previous novels, the Wereworld series, were epic fantasy in the vein of Game of Thrones for middle graders and teens, yet here I was attempting a novel set not only in our world, but my old high school. It's a very personal book. Although Will is a fictional character, he's very much based upon a teenage Curtis, as Dougie is an amalgam of my best friends. The other characters who flit in and out of Will and Dougie's stories all have their real-life counterparts too, only I've fractured them, distorted them, made them my own.
I let the plot simmer before I threw myself into writing the first book, allowed myself to cast my mind back to what my teen years were like, pull on those memories and events that had impacted upon me. I thought back to the old mix tapes I used to make, the cheesy notes I'd send to the girls I fancied, the late nights playing Dungeons & Dragons and the bike rides home in the dark. How I tried to make the girls laugh to catch their eye. How to make the bullies laugh so they didn't beat me up.

I was writing what I knew.

It's a corny old saying, but there's a truth to it. The first draft of Haunt: Dead Scared was written in record time for me, partially because I was pulling on real life experiences. Only with added scares. And deaths. And ghosts. I don't believe in ghost stories and the supernatural, although I remain absolutely fascinated by them. The ability to shock and surprise the reader is a key ingredient in any horror story, but as I've said, I need a little bit of light with my dark. It can't all be doom and gloom, because there's more to life than that. There are shades of grey. Laughter can burst the burble of tension, allow the reader to breathe again. Even in the scariest moments, there's always room for comedy.

Give me a chuckle alongside my chills every day of the week.