Tom Palmer 'if I can be frightened, it means I am more likely to be able to frighten you'

Killing Ground is the story of two children. Seth, who can see dead people from history. Nadiya who knows a lot about history. Together they are the Defenders, protecting today from the ghosts of yesterday. 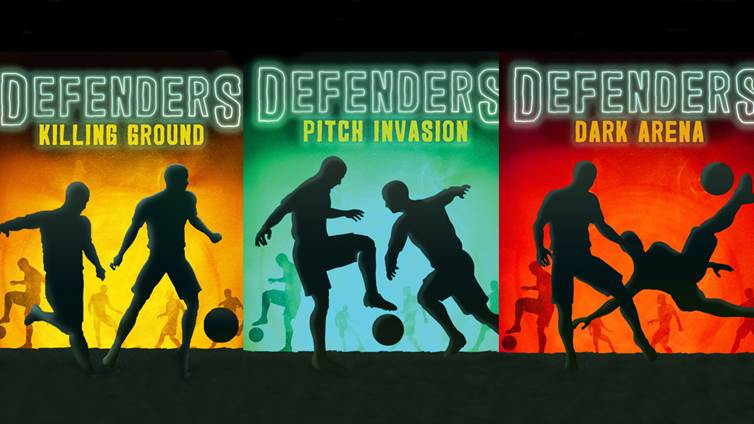 If Seth walked home with you after school today, he'd see dead people on the way. In the shops. On the footpaths. In the parks.

And, if you live in an old house, he might see some there too.

The dead people don't hassle Seth. Not all of the time. He just sees them going about what used to be their lives. They're like shadows or echoes of the past. Like the smell of toast long after the toast has been eaten.

But sometimes, the dead do hassle Seth.

That's when Seth has to hassle the dead people back. With Nadiya's help.

For instance, there was a time that Seth went to London and he saw what he thought were zombies streaming through the streets. In fact he was seeing the ghosts of Iron Age people enslaved by the Romans. Either way, the zombie slaves were causing trouble in London. A new football stadium was being built and some of the builders had been having terrible accidents.

When hauntings affect other people, Seth and Nadiya take it upon themselves to intervene. They try to find ways to stop the hauntings. To save lives. That's the idea behind the series.

I like to go through what my characters go through. I need to look at the world through Seth and Nadiya's eyes. I can't see the dead, but I do have a way of coming close. Something you could do too.

When I research my books I go to places where I know historic events have taken place. Castles. Battlefields. Abandoned buildings. Old airfields. That sort of thing. When I'm there I try to imagine what it was like in that place hundreds, or even thousands, of years ago.

For instance, when I was researching Killing Ground I went to a hillside where I knew there had been a Viking attack on an Anglo Saxon village. I read about the bloodshed and the horror. I watched films about it, like Nadiya would do, so I knew about what people suffered back then. Then I wound myself up and went alone in the middle of the night to the site.

I did it to frighten myself.

When it's dark and there are no more car noises or dogs barking and it's cold and you know that no one will come your way for hours, it can feel frightening, when you're away from warm rooms and well-lit buildings.

The second Defenders book – Dark Arena – is set in a haunted football stadium. I needed to know what it was like to be in a football stadium all alone, no floodlights, nobody else around. So I went and camped in one. Alone.
It was an old stadium, medium sized. The stadium manager let me put my tent up on the pitch and gave me the keys to all the dark corridors and secret rooms under the stands.

I stayed up most of the night, walking the stands and around the dressing rooms, a bit like a ghost myself. I wanted to be afraid. And, I have to say, it was worth it. Because I need to be frightened to write frightening books. I am a writer and I need to feel the things my characters feel. And, if I can be frightened, it means I am more likely to be able to frighten you, the reader.