On writing and needing diverse books

There has been a lot of discussion about the need for greater diversity in Children's Literature recently. Malorie Blackman, our wonderful Children's Laureate's incredible opus of work speaks for itself, but the fact that she has consistently placed her voice behind a call for more diverse books has undoubtedly had an impact on the current shout out of #weneedmorediversebooks. 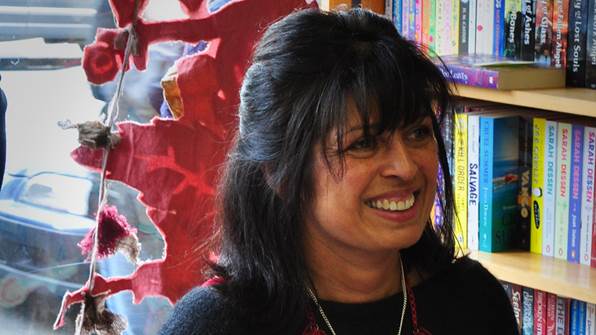 This rallying call is not a new one. In 2011, at a library conference event, I was lucky enough to meet Jamila Gavin and we talked about the fact that although Artichoke Hearts was my first novel the instinct to write my Mira character came from a shared place when she first began writing. We discussed that when we were at school there simply was not the range of representations in stories that reflected the society in which we lived. Jamila Gavin was one of the writers who paved the way in children's fiction for someone like myself to be published years later and for the books that I write not to be considered as part of a separate diverse canon, but simply to be stories that talk to anyone and everyone.

Before writing novels for young people I worked in community theatre and many of the discussions about how it feels to have a character who may be connected to you, your religion, culture, and background represented in a play on a stage... are the same discussions as are happening now around diversity in children's publishing. Through my work in theatre with young people in youth theatres and schools I found that time and again when the channels were opened up for young people to tell of their own stories and observe others who may seem to have little in common to them - two extraordinary things happened.

The first was that the person telling their story felt empowered by the fact that other people recognised them and valued it and by extension the characters that populated their stories which they sometimes drew from their own family backgrounds.

The second was that those observing the story also became part of the story. I remember one improvisation in which two girls sat side by side. One was of Bengali origin and was playing the part of her own grandmother, the other, her best friend, was of Irish origin and she stopped the improvisation mid-flight, correcting her friend. She said 'I'll tell you how your grandma uses her hands when she talks... like this!' To the amazement and delight of her friend and the rest of the class she respectfully performed the physical gestures of her friend's grandma, even walking around the room as her while her Bengali friend spoke the voice. It was a seamless joint performance. Afterwards the two girls hugged. In a follow up visit the drama teacher observed that the two girls had hardly every contributed before in class but now they were seen as two of the best performers.

Their process of observation, research and empathy made it possible for them to step into each other's shoes. This is the same process that I adopt when writing.

How does it feel to see stories of characters who may seem to be very different from you in a story?

It feels like you're discovering something new and stepping into someone else's shoes.

There is a danger in the discussion around we need diverse books of people feeling that because of their own diverse backgrounds as writers they become expected to tick certain boxes. I never feel like that. Perhaps my experience as a child of how it feels not to see yourself reflected may have made me interested in the themes that I find recurring in my stories 'belonging, community, history, inheritance and a search for a place to call 'home'... but these are universal themes that belong to being human. It's the wish to understand these things in other people that makes me want to tell diverse stories.

A comment made by a reviewer of Red Leaves recently points to this possible pitfall.

'What can sometimes worry me is diversity for the sake of diversity - where books are put forward just because of the boxes they tick.'
It has always been difficult for me to find the right box to tick on questionnaires and forms and I suspect that many people from our diverse world find it similarly difficult to find where their slot is. In stories, unlike in questionnaires, writers can expand those confining slots that nail us to a single identity. I was so pleased that this reviewer recognised this in my work:

'Ticking boxes is not Red Leaves. It's about telling stories, weaving tales from past and present, far and near around the world, and bringing them all together in a wonderful crescendo.' - Jax Blunt

We need diverse books because our world is diverse. If writers don't tell the stories of diverse characters and the way they are navigating their way through the world, then our books begin to look alien to our society.

I recently read a shocking article about how a large proportion of young people in this country still do not own a single book. At the launch of Red Leaves in a London school I was moved when the teacher told me that more children had bought a book on that day than in any other school visit and that for a significant number of these children Red Leaves was the first book that they would own.

The reasons for this in terms of a lack of reading culture, economic difficulty and people coming from aural storytelling traditions are complex, but there was a simpler answer to the reason that these girls had persuaded their parents to pay for a book. To research the character of the Somali refugee girl Aisha in Red Leaves I had worked with a group of girls in a number of lessons and in the back of the book I acknowledge their contributions. These young women and their friends were very proud to have been part of a book that everyone could read. In a read through of a draft manuscript the girls made me change what had been Aisha's name...their reasoning was that they didn't want anyone to be put off by finding her name too difficult to pronounce.

I was reminded that my own dad used to sometimes shorten his name from Dr Brahmachari to 'Dr B.' As a strident teenager I used to tell him off. I would say 'Why should you compromise your name... people should learn to say it.' But he, like Jamila Gavin, had fought different battles in which he would have been more of a lone voice. I understood the instinct of the teenagers I worked with because even now they have not seen many representations of a Somali British girl in a book. At a time when these young Muslim girls articulated to me that they feel the weight of negativity in the media they said 'We want everyone, not just from our background miss! to love Aisha.'

The young girl in the photo below is the girl I pictured when I was writing Aisha. It helps me to picture young people I have met who have moved me, in one way or another. The girl in the picture is not Aisha, but she is one of the many diverse young readers I want to write for. I am not Aisha, I'm not Zak, I'm not a homeless seventeen year old girl from Scotland, I'm not a Sikh owner of community store, I'm not an ancient homeless woman, or an Edwardian craftsman, or a soldier from World War I... But these are the diverse characters whose stories weave their way through my latest novel Red Leaves.

write diverse books because I write about my world and in that world diversity is complex. It includes wealth and poverty, cultural and religious belief and difference, ability and disability, journeys from lands you were born in and the land you have travelled to either in this generation or others. I write about the people who populate my street, city, country and world. I learn about them and try to step into their shoes. My imagination is fired by these meetings and there is always a moment where the noise of the real world recedes and wherever and whatever we have come from we can sit together around a fire in an autumn wood.

'We are proud to endorse Red Leaves because of its sensitive depiction of diversity and the human need for somewhere to call home. It's a novel that encourages readers' empathy, which is a big step towards understanding, tolerance and kindness - all values that help us to uphold human rights.' - Nicky Parker (Publisher. Amnesty International UK)