Tony Robinson on winning a Blue Peter Book Award: 'If happiness is usually the size of a tennis ball, I feel the size of Tasmania!'

Actor and author Tony Robinson talks to Booktrust about winning a Blue Peter Book Award 2014 and the importance of narrative. 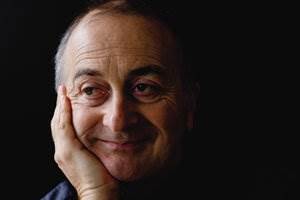 How does it feel to win?

If happiness is usually the size of a tennis ball, I feel the size of Tasmania! Two things, firstly with Blue Peter you feel it's like a Good Housekeeping seal of approval; you feel that it's genuine, it's clean, it's not about promotion, essentially it's about wanting to attract children to books.

And secondly because children themselves do the voting, there's something very real about it, it doesn't feel as though you're in that rather rarefied atmosphere of publishers talking to each other, it feels like it's a quite genuine pat on the back.

What is it about history that draws you in so much?

I can remember from my daughter's generation there was this great fashion for CD-roms, and just for a very few years the technology that was poured into the CDs was fantastic and the amount of quality writing was practically zilch, and they just disappeared, and I'm sure that that's not a coincidence.

Specifically on non-fiction books, do you think it's important to promote them?

It's a worry for me that kids are reading so few non-fiction books - it's great that they're reading narrative and story books, but it's sort of frustrating that apart from a few established brands, we haven't really persuaded kids that there is as much fun to be had out of reading non-fiction books as fiction books. The reality is they can get lost in them in the same way, but there's still a job to be done there.

How do you encourage children to write?

Whenever I'm doing work with kids, I try and encourage the kids who don't feel that they are very good at writing, or feel that there are five kids in the class who will always come top in any form of creative writing endeavour, I try to say to them they're not necessarily going to be the ones who hack it and survive - just because someone's brilliant when they're 11, doesn't mean they're going to make it when they're 25. It's people like you who are able to put down your raw experiences onto paper - they may not be as well formed as the other kids but if they're real, readers will respond to that reality and the more you write, the better you'll get at it.

The other thing that I always try to hammer into kids is about redrafting. If you write something once, the likelihood is that the teacher is going to slag it off a bit because it will be full of mistakes. You've got to want to do it enough to write it, put it aside, write it and put it aside again - and if you draft it's going to be fantastically good.

How important do you think it is to encourage families to read every day?

I was thinking about this the other day, that one of the very first things I would do with my first granddaughter was to pick her up and hold her, close to my heart, bounce her up and down and recite humpty dumpty. Now what that meant was the first narrative I told my granddaughter, she had no idea of the story, what she got was the purely tactile rhythmic relationship, and as she got older the more sophisticated that became. It's as much to do with the relationship between the person telling the story and the person receiving the story.

We say, how is it that kids learn grammar? Well, somehow it seems to me that from the moment that a child looks into your eyes as you say '... had a great fall!' they understand an awful lot about hiatus, about the need to hold back in a story, about rhythmic use in narrative... and yet how's it done? It's all done within the arms of someone you trust because they know they're not really going to fall.