21 March is the International Day for the Elimination of Racial Discrimination. Here, our Writer in Residence Onjali Q. Raúf shares how more stories are beginning to be told - and shares some super reading recommendations... 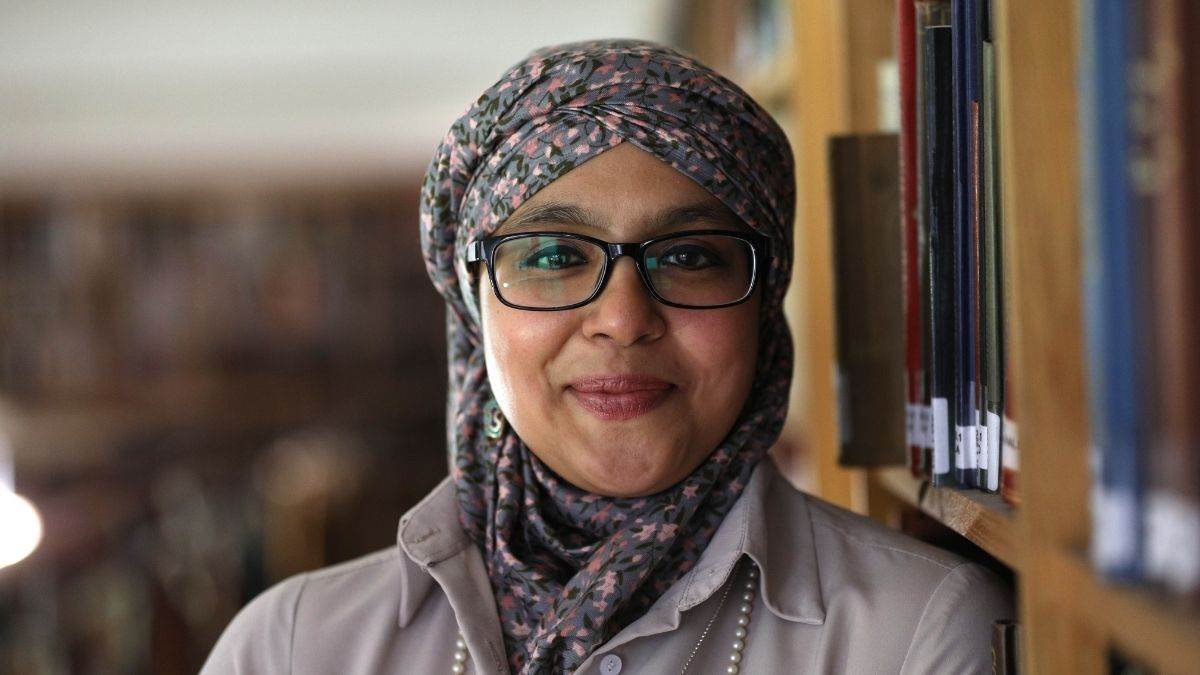 This past year has seen, in the midst of an already life-altering global pandemic, a huge wave of overdue awakenings as to the true cost and results of institutional, individual, subtle, and overt racisms impacting our worlds.

In fact, many would argue (and I am inclined to agree wholeheartedly) that racism, so often rooted in deleted or overlooked histories, and the resulting discriminations borne daily by all people of colour and differing faiths, is a pandemic of itself - one that has been plaguing the globe for far longer than any horrid virus has, has created lockdowns for generations of people, and has been the root cause of far more deaths over the course of humankind's history than we can bear to imagine.

From the atrocities of the trans-Atlantic slave trades to the residues of colonialist racisms on the nations they 'ruled'; from the Holocaust of the Jewish peoples in Europe to genocides committed in living memory in such countries as Bosnia, Rwanda, the DRC or even currently unfolding in Yemen and China; from the inhumane treatment of refugees by today's governments to men and women being arrested or shot by ruling powers on the streets of the USA... One message remains clear: we still have a long way to go before racial - and in tandem with this, religious - discriminations are truly faced and eroded for good.

The great - wonderful - news amidst what feels like an endless timeline of pain, is that whilst the road ahead is indeed a long one, the journey has well and truly begun, with more and more new wheels being created every single day to ease the journey onwards.

More authors, more illustrators, more historians, more filmmakers, more singers, poets and activists are emerging and demanding that their unique voices, experiences, histories, images and stories - existent all along but too often ignored or silenced - be unleashed and accepted. Not just for the adults of the world, but for our children too.

And it couldn't happen soon enough.

Growing up on a council estate in East London (cue: picture of me at the age of seven with my sweater tucked into my pants!), I was deeply aware of the fact that barely anyone looked like me or my family members in books or on the three scant channels of our television set. Muslim men, women and children of any background in fact (Iranian, Turkish, Somali, Nigerian, Malaysian, Indonesian, Burmese etc) didn't seem to exist anywhere except on the streets of my little corner of the world. Not even as sidekicks!

Through my books, any hints of a world which lay outside Great Britain or America came solely from three places: Tintin comic books (which I adored, but which have rightly been critiqued for featuring many a dated, racist stereotype), a book of Indian fairy tales my mum had found one day in a jumble sale, and The Arabian Nights. That was pretty much it. However, despite what we might think of it now, Tintin was still, for me, the first ever material proof I had that there were other places in the world where stories could be forged. Places like Egypt, Morocco, Algeria, Japan, India and Saudi Arabia - all places Tintin ventures out to, signalling that there was more 'out there'.

Their library and home bookshelves are, I hope, beginning to see more permanent splashes of colour (pun intended!), and new, inclusive worlds of stories opening up to them in a way that has never happened before. And the more this continues to happen, the more we will hopefully see a diminishing of labels which serve only to exclude, to ignite hate, create bullies, and punish those whose restricted roles and opportunities in life continue to be dictated by the pigmentation of their skin, or the differences they may hold in relation to faith/non-faiths.

It will take time for all of us 'them' to be just another, normal, everyday part of the universal 'us'. But we have made a start, and get to be a part of it too.

The books listed below are just a fragment of the many books I revere for making the act of eliminating racial discrimination and fears not just a one-day affair, but an everyday achievement. And by this time next year, I hope we will have infinitely more stories to - as shero Harriet Tubman urged - 'keep going' in the efforts to make racial discrimination in all its forms a crime confined to our future history books.

Wisp: A Story of Hope by Zana Fraillon, illustrated by Grahame Baker Smith
(Ages 3-5)
I was gifted this beautiful book by a fellow activist, and it immediately gripped my innards. Idris and that tiny wisp will stick to your heart just like the face of any refugee child you may ever meet, and the images are haunting, dignified, and oh so staggeringly ethereal.

The Proudest Blue by Ibtihaj Muhammad and S.K. Ali, illustrated by Hatem Aly
(Ages 4-8)
I can only imagine what impact seeing a picture book like this would have had on me as a Muslim child. I didn't wear a scarf until I was 15 following my first pilgrimage to Mecca, but I had aunts and grand-aunts who did - and I knew they did so knowing they would be bullied and harassed, because I saw them being so every day. This gorgeous, sweeping picture book hits on a moment all girls wearing a hijab for the very first time at school - and being called names as a result, will instantly connect with.

Look Up by Nathon Bryon, illustrated by Dapo Adeola
(Ages 2-5)
What more is there to say about this award-winning, game-changing picture book? It not only reignited my childhood dream of donning a spacesuit and catching a star, but has undoubtedly inspired an army of little girls to see themselves as future Rockets - and boys to view girls as possible Rockets too! Brilliant, and utterly huggable.

Trailblazers: Harriet Tubman by Sandra Agard
(Ages 8-10)
This brilliant, eye-opening insight into the works, words and music of a woman who saved thousands of lives, and helped change the course of history, will stick with you once read. I am so grateful that I got to be a Pass the Pen partner with author Sandra Agard last year, and got to learn of her phenomenal book. One that is a must for all History and International Women's Day bookshelves.

Windrush Child by Benjamin Zephaniah
(Ages 8-12)
Benjamin Zephaniah was the first ever Black artist I got to see perform live as a child - I was 15, and he was the final stop of what had been, up to then, a really boring school trip. He woke me up to the fact that people of colour could be poets too - which meant I could be a writer too, maybe? On getting home that night, I picked up my pen in utter earnestness and I haven't stopped since.

Windrush Child, his latest offering, is a story which refuses to shy away from the deep wounds of racist words. Wounds that never truly go away, and which any child bullied in playgrounds for not being white will instantly connect with. A must-read for every human being on the planet. Fact.

Born a Crime by Trevor Noah (Young Readers Edition)
(Ages 10+)
I remember the moment my mum called me down from doing my homework to watch Nelson Mandela being released from prison. I never understood the significance of what I was watching until years later, because apartheid was never covered at school in any way - a change that needs to be made, if anyone is to understand just how long-lasting racist policies are sewn by an invading force. A hilarious, eye-opening insight into a world that is still coming to terms with so many forms of apartheid, this version for younger readers will ignite at least fifty-seven questions, and again, needs to be read by all.

When Hitler Stole Pink Rabbit by Judith Kerr
(Ages 9-12)
I cried my eyes out on reading this in secondary school. Even just thinking of it fills my eyes right back up. It's a classic after which, of course, Anne Frank's Diary needs to be consumed too. I remember wondering as a child, if maybe Judith Kerr had met Anne Frank one day somewhere, and so had made her main character an Anne too. That association between the two stories has never quite left me, making them both forever linked.

Boy, Everywhere by AM Dassu
(Ages 10-14)
For anyone, anywhere, who has read The Boy at the Back of the Class and wants to understand more deeply what Ahmet's real journey has been like - a journey current governments are forcing millions of children to undergo - then this book is it. A heartstopping story, which brings to light the deep racisms governing reactions to the word, and the people labelled, 'refugee'.

Good Night Stories For Rebel Girls: 100 Immigrant Women Who Changed The World by Elena Favilli
I can never get enough of the Rebel Girl series - but this one opened my eyes yet further to to the incredible lives of women whom I did not even think of as having migrated from the countries of their birth to the worlds they now dominate. From chef Asma Khan (whom I am lucky enough to have met) to former US Secretary of State Madeleine Albright, to superstars Rihanna and Yuan Yuan Tan, the stories - illustrated by female artists from across the globe - are an eye-opener as to the richness and talent that exists in this world, regardless of the manmade borders placed upon it.

Whether it's International Women's Day or not, it's always worth pointing out and celebrating the – often forgotten or undervalued – achievements of women, both past and present.