Reeve & McIntyre: 7 reasons why it's awesome working with a co-author

The immensely talented and down right wonderful illustrator Sarah McIntyre, who's work includes Vern and Lettuce and The Legend of Kevin, became our fifteenth Writer in Residence back in 2017. In this blog Sarah shares all the joys of having a books partner-in-crime. (Warning: contains astonishing outfits.) Working on books is an amazing job, but I think that making books with a friend is way more fun! So far, Oxford University Press have published four books by Philip Reeve and me and it's been a blast. Here are a few reasons why it's more fun working as a team:

1. A co-author provides CONTEXT when I walk around town looking completely bonkers. I have to be much more brave on the occasions when I do solo events and ride public transport in full costume. 2. School staff rooms and festival author lounges are less scary when I'm with my co-author. Not everyone realises that staff rooms can be very intimidating places! And since I didn't grow up in Britain, I often don't know who I'm chatting to in a festival room, and Philip can later fill me in that it was some VERY FAMOUS person I really ought to know about. 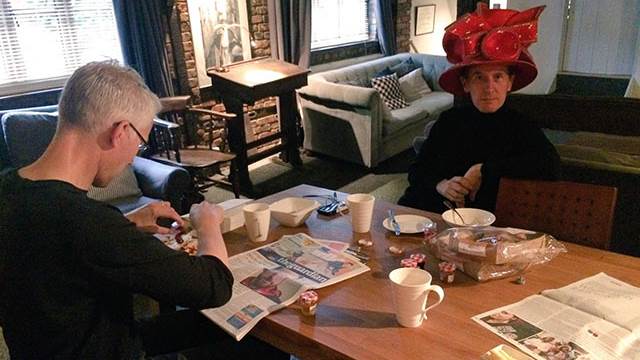 The staff room awkardness was actually why I started the whole diva act thing: when I was polite and self-effacing, teachers would assume I was some parent who had wandered in, and not quite know what to do with me. But now I flounce in a ballgown and it makes everyone smile and they know I'm there for some special reason, whatever it is. But it takes a lot of guts to do it by myself. 3. We take our work seriously but we help each other not take ourselves too seriously. It's hard to feel like a chin-stroking 'Serious Author' when you're surrounded by a wriggling sled team of pugs. We wouldn't have it any other way! And calling ourselves 'Reeve & McIntyre' makes us feel like a comedy act. Also, Philip is a helpful source of fashion advice. 4. Both of us can draw AND write. So if we get stuck, or see a scary deadline looming, we can use the whole 'phone a friend' get-out! And sometimes it's just fun to work together. Philip lives on Dartmoor, but for the last couple of books, we've worked on pencil roughs together while he's been in London. We've recently been drawing stuff for our upcoming activity book, Pug-a-Doodle-Do! (It launches this autumn, here are the covers.) 5. Working together stretches our creative skills. Before I started working with Philip, I mostly illustrated picture books and made comics. And while Philip used to illustrate books, he'd been mostly writing for the past decade or so. Our first published story together was a challenge we set for ourselves: I'd write a four-page story for The Phoenix Comic and Philip would draw it! He did an amazing job, then after he drew the lines, I added the colour. Years later, we ended up turning the Jinks & O'Hare Funfair Repair idea into a much longer book! 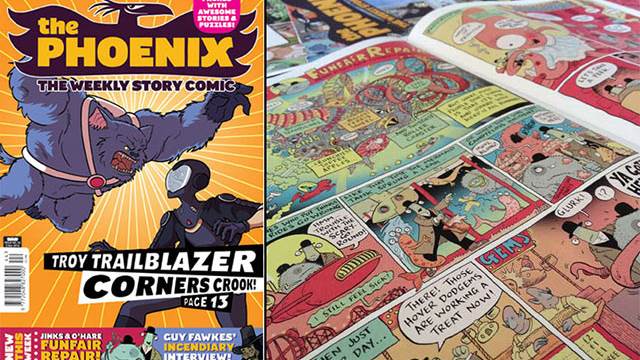 Usually we start a book by Philip asking me, 'What would you like to draw?' For Cakes in Space, he was curious to see how I'd draw space tech and robots, and I loved the chance to try something new.

6. Co-authors stand up for each other when one of us gets left out. Sometimes reviewers or teachers forget that the illustrator plays a big part in the reading experience of a book. Or they don't understand that Philip and I came up with the ideas together, they think I was brought in at the end to make his story prettier. Or sometimes they just think writers are more important. Philip's brilliant at reminding them that we're actually a team, and pictures matter!

7. There's twice as much to get excited about! I don't actually illustrate Philip's longer novels, but I LOVE reading them, and sometimes he'll let me read them before anyone else does. Once when I had the flu, he proof-read the whole of Railhead to me over Skype, to check for mistakes and check the rhythm of it, and it was brilliant. He even dedicated the second Railhead book to me - a proud moment! Railhead's shortlisted for the Carnegie medal and I'm keeping my fingers crossed for him. And I'm so thrilled that after so many years of thinking the film adaptation of his Mortal Engineswasn't going to happen, it's finally kicked into gear and they're filming right now in New Zealand! SO EXCITING. All I hope is that Philip doesn't get SO famous from the film that he won't work with me any more. But he says he's not going to stop doing Reeve & McIntyre stories, and I'm going to hold him to his word! You can now get your hands on the paperback edition of Jinks & O'Hare Funfair Repair! Check out my website for more information about all our books and lots of fun downloadable activity stuff for home, classrooms, libraries, or wherever it might come in handy.