Fancy something different for lunch? Beetle Boy and Beetle Queen author MG Leonard explains why we could all soon be eating creepy crawlies...

Have you ever eaten an insect? Can you imagine going into a restaurant and ordering a bug burger?

I became interested in the human consumption of insects and arachnids as food - also known as entomophagy - when I read a paper from the United Nations about how to solve the global food crisis as the number of people on the planet gets bigger and bigger. Their conclusion was that the only sustainable solution is for us to eat less meat... and more bugs. 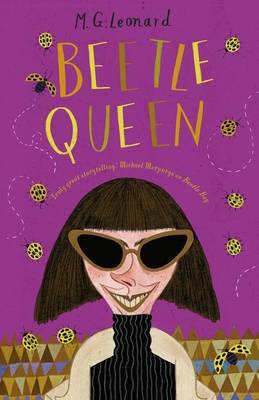 Some countries already eat bugs and think nothing of it, but in the United Kingdom and other western countries like America, we have a cultural aversion to putting bugs in our mouths. It's only done as a dare or a punishment on celebrity TV shows.

However, during my adventures in the world of insects and entomologists, I came across Andy Holcroft, a wonderful chef who has a restaurant called the Grub Kitchen in Pembrokeshire. It's the only restaurant in the UK that serves insects as part or some of its dishes, and it was there that I got to try cricket cookies, buggy Bombay mix and bug burgers. And they're all delicious!

Our problem is that we imagine the food to be like the wriggling bugs on those TV shows, but no one eats their food alive, do they? It would be intolerably cruel. You wouldn't eat lamb if it was alive, and when it's on your plate it doesn't look like a baby lamb. It will have been cooked perfectly and seasoned to taste wonderful.

It's exactly the same with eating insects. When insects are cooked beautifully and they don't look like bugs, I promise you that you would enjoy eating them. The revulsion you feel about the idea is all in your mind.

In fact, I'm so interested in the idea that 'insects are the new sushi' that I included a chapter in my new book Beetle Queen where Darkus and his friends are served up an insect supper and dare each other to eat tarantula tempura. It's a funny moment, but it also raises some serious questions.

I used to be scared of insects, and it would have been my worst nightmare to eat one, but as I write the Beetle Trilogy, my journey through the world of invertebrates is teaching me many things - most often about the power of my own mind and the impact of learning. If, in the future, food is scarce and bugs are on the menu, I'll be happy to eat insect meat - it's low in fat, high in protein and tasty. I'll take one bug burger with chips, please...