Fleur Hitchcock - How I wrote Murder in Midwinter

I wish I could say that Murder in Midwinter struck me as a fully formed book, all the characters mapped out and the story a clear narrative in my mind, but the reality is much less defined. In truth, it's the result of a collection of ideas that gelled together in some magic and indefineable way over a period of months. 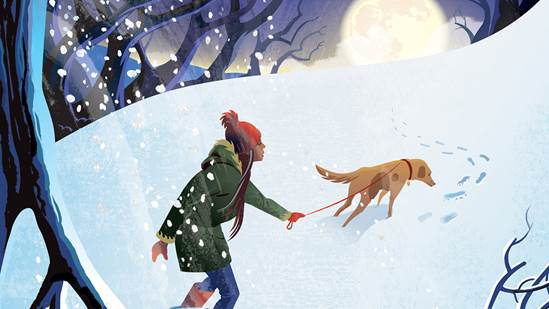 When I look back, I can see where the different elements came from, but I don't understand what went on in my head to make them combine.

These were the things I knew - First there was London. I really wanted to set the book there. So Maya, the heroine, lives near the Southbank. Her walk home from school involves views of St Paul's Cathedral, the London Eye, the Thames, and in the winter, the bridges over the river lit up in purple and green. It also involves the maze of streets behind, altogether less shiny and less architectural, where people really live. It's the part of London on I've walked through more than any other and I love it, so I made Maya love it too. For me it's so familiar I could live there - for her it's home.

Then there's Wales. I lived there for three years, always looking back at the mountains, aware of the emptiness. It seemed to me the perfect opposite of London's crowded warmth.

I added winter. London at Christmas is all about people and lights, and shiny shop windows and nut sellers and smells. Winter on the mountains is cold and bleak. Tiny farms hunker down in the folds of the hills, raw handed farmers break troughs thick with ice, animals huddle around spots of hay on the snow. The winter can be ferocious with villages being cut off for days at a time. I felt that would come in useful.
I knew also that Maya's family would be important. That she would have brothers and sisters, a granddad, a mum and a dad. That they would live in a small flat over the family business. That she would have bonds with them all in different ways. That she would need to be with them and that if she was separated from them she would miss them dreadfully.

Then I knew that I wanted it to be a thriller – not a detective mystery, a proper, edge of your seat, thriller because I've always enjoyed thrillers. All my life I've sought out books and films that took me out of myself. Stories where the character faced dangers so perilous that they stopped me from breathing. They were often tales that played on my fears of the ordinary terrifying things of life. The creaking door, the tree that taps on the window, the footsteps on the stairs – my own heartbeat so loud that I was sure that someone else could hear it. But then I loved the chases, the hunts, the edges of cliffs, the jumping into the void.

There was another factor that kept on appearing at the front of the idea. I wanted Maya to witness something, something that would change her from an observer to someone who would become hunted. It took a long time to work out exactly what she saw, who she saw, but it was clear that it would put her in great danger. It needed to be murderous. That was when those remote Welsh mountains came in useful. All that snow that would in theory keep her safe, but would it?

And finally, as I began to write, I wove together the characters that would surround her, and the incidental ingredients of the story. Horses, that Maya doesn't know how to ride, snow, a difficult relationship with her cousin, Ollie, an old bulldozer, the police. For the months that I wrote it I watched Maya take on her own identity. I lived with her fears and her courage, her anger and her laughter and from the edge of my seat, I watched her adventure unfold.