Letter from a Laureate: Malorie Blackman

Here's what Malorie Blackman had to say.

I was honoured to have been the 8th UK Children’s Laureate from 2013-2015. With the help of BookTrust, the role gave me the opportunity to focus on bringing books to teens and teens to books – a cause very dear to my heart.

Books for Young Adults and teens

In my two years as Children’s Laureate, I helped to set up the YALC – Young Adult Literature Convention in London, which is part of the annual LFCC – London Film and Comic Convention. The LFCC brings the world of film, TV, comics, graphic novels, computer games and books together under one vast roof! YALC now runs on one whole floor of Olympia and was set up as a way of bringing new and established authors and books to a wider young adult audience. 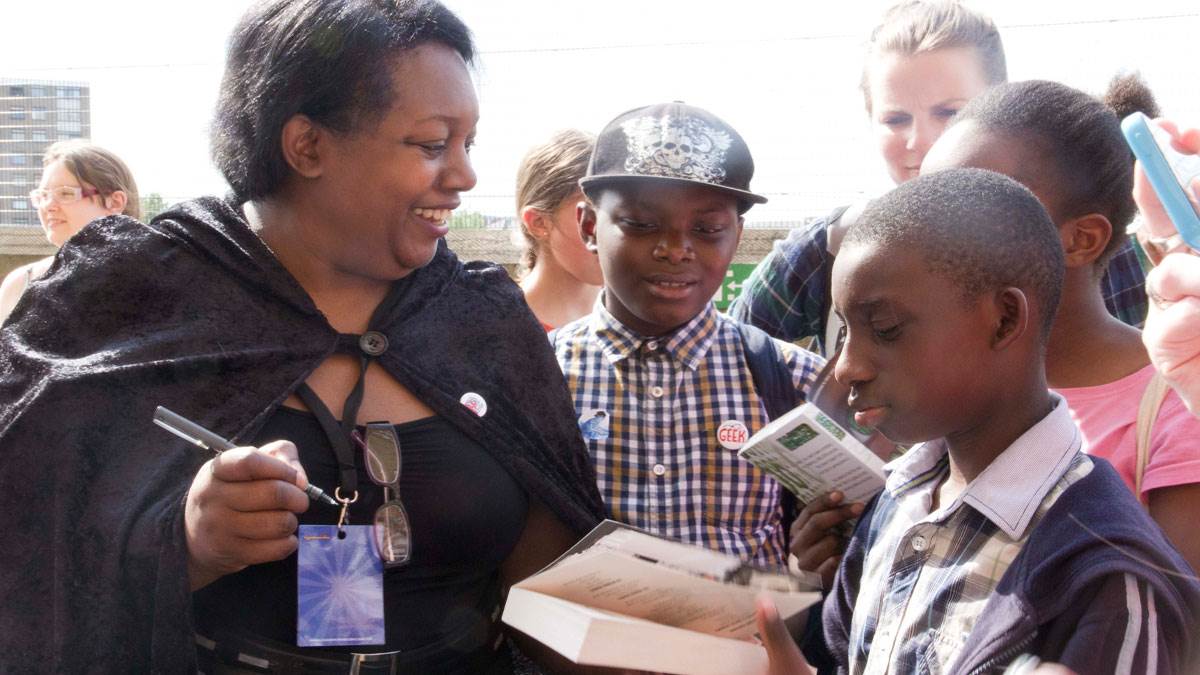 As Children’s Laureate, I travelled up and down the country, visiting schools from Aberdeen to Cornwall and I was thrilled to visit Northern Ireland for the first time. I spoke to over 30,000 teens at schools and festivals nationwide about writing, books and reading for pleasure.

Creative ideas for everyone

I also helped to set up Project Remix, where we invited teens to create their own stories, comic strips, cover designs, book trailers or music inspired by a book, poem or graphic novel from a given selection.

It was a love of reading that fuelled my own desire to write and I was keen to initiate a project showing how stories could be the springboard to all kinds of creative endeavours.

We received some amazing stories, music and artwork, all inspired by the books. My thanks once again to all those authors and illustrators who allowed their work to be used for this project.

Laureates from around the world

The story anthology Love Hurts came out during my tenure, published by Random House. I wanted this book to act as a showcase for existing young adult novels as well as featuring new stories. I was keen for Love Hurts to act as a shop window for those readers – both teen and adult – who may not have come across a particular author’s young adult stories before. From the positive feedback I received, the book did exactly that.

I had the opportunity to visit the world-renowned Bologna Book Fair for an event with Children’s Laureates from around the world. This gave each of us the chance to compare and contrast what we were doing and why we were doing it in our own respective countries and provided a fascinating insight into the role around the world.

As part of my role as Children’s Laureate, I was a spokesperson promoting reading for pleasure, especially for our teens who may fall out of the reading for pleasure habit due to exam and school pressures. I did numerous media interviews throughout my two-year stint and was also a guest on Desert Island Discs and a judge on Radio 2’s 500 Words competition. I also wrote a number of articles for various publications throughout my two-year tenure.

The highlight of my two years as Children’s Laureate was all the amazing, intelligent, talented young adults I had the chance to meet up and down the country. They brought a lot of laughter and joy to the role for which I’m grateful.