'Patronus on a Postcard' art auction for BookTrust

Bloomsbury has joined forces with BookTrust this July to mark a very significant date for all Harry Potter fans… 20 years of Harry Potter and the Prisoner of Azkaban. 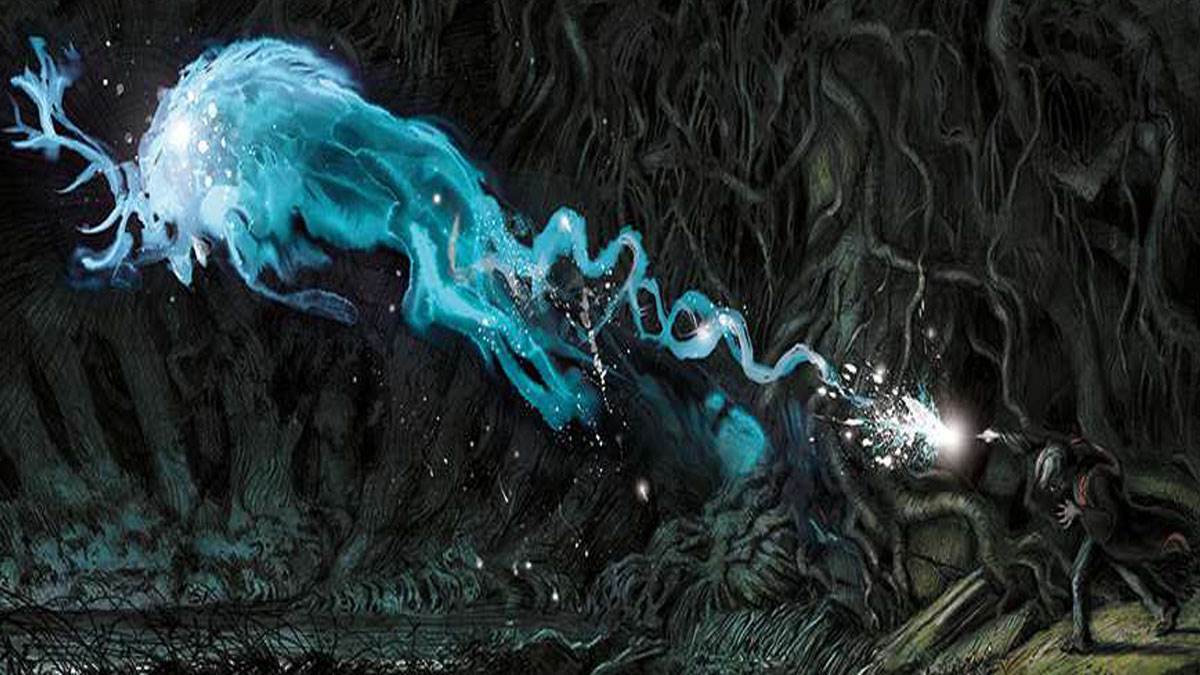 This spellbinding third book in the phenomenally successful Harry Potter series introduced readers to the notion of casting their Patronus – a protective spell that manifests as a silvery animal guardian.

To celebrate we challenged over 20 of the UK's most talented artists and illustrators to create their own ORIGINAL Patronus characters on an A6 postcards.

Prospective purchasers were able to bid for the one-of-a-kind pieces online at BookTrust's eBay for Charity page and the postcards were displayed at Waterstones Piccadilly.

The auction is now CLOSED. Thank you to everyone who took part and congratulations to the winning bidders!

See the Patronus on a Postcard artwork

Alex T Smith has a tiger for his Patronus: 'Tigers are strong, powerful and fearless - all good things to call upon when in need. But they are also just great big cats, look good in hats and, according to a book I read, make excellent teatime companions.'

Catherine Rayner has a peacock Patronus! 'I believe peacocks are incredibly magical in the natural world so to have one as a Patronus must mean the magic is made more intense!' she says. 'I wanted this peacock to have especially vibrant colour so I've used a combination of lots of different materials including watercolour and pearlescent ink for that touch of magic sparkle.'

This postcard is by Chris Riddell, who says: 'My Patronus would be my little Jack Russell Rosie who is no longer with us - this little picture is a tribute to her.'

Dapo Adeola's Patronus takes on the form of a king cobra. He says, 'I was initially just super excited to receive an invitation to participate in this awesome project, but my excitement was cemented when I got given the King Cobra Patronus. I’ve always wanted to draw one just to see if I could, to be honest, and now I got to do one as a Patronus too. Happy days!'

Emily Gravett's Patronus takes the form of an otter! She says: 'I was lucky enough to get Hermione Granger’s Patronus - she's one of my favourite characters. Although they’re not the easiest of animals to draw!'

James Mayhew chose to draw a husky for his Patronus. 'I recently reconnected with a long-lost friend, and it turns out she keeps huskies, so these fascinating, curious animals were much on my mind,' he says. 'I think if I could conjure a Patronus, I'd like nothing better than Man's Best Friend - but with a bit of wild wolf about him!'

This rhinoceros Patronus belongs to Jim Field. He says: 'I chose to draw the Rhinoceros because I love the shape of this great animal. It looks like a mythical creature. I used a wash of watercolour blue as background tone. I then drew the Rhino with a waterproof lumograph pencil, then finally added a wash of the lumograph pencil and Chinese black ink around the outside of the Rhino.'

Jim Kay explained how he created his stag Patronus: 'I painted the illustration under a magnifying lens, using pigments actually designed for model kits, but they are lovely to use being such fine paints with lovely opacity. The background is inspired by William Morris. I painted the reverse too; I sometimes hand-paint the stamps on letters to people.'

Joe Todd-Stanton has a Patronus in the form of a cat. He says: 'I had the privilege of having two black and white cats as my childhood pets. They are the best because they aren't scary and mysterious like an all-black cat or aloof and intimidating like a white. They are lazy, friendly idiots and that's why I love them so much.'

Jonny Duddle has a Phoenix Patronus: 'I live in North Wales and walk the hills with my dog, Mabel, for exercise and inspiration. There are buzzards and kites, sparrow hawks, owls and kestrels. They always stop me in my tracks. I’ve been fascinated by raptors since childhood, so a Phoenix Patronus was a brilliant challenge. I tried a full body drawing, but it was too small for my ageing eyes, so I zoomed in on the face of the Phoenix. I do most of my work digitally, so had fun playing with pencil and acrylic on the postcard’s unforgiving surface.'

Ken Wilson-Max tells us about his lion Patronus: 'The Shona word for lion is Shumba. Before I started school we lived beside a railway station (my dad worked on the railways) in Hwange Game reserve, near Victoria Falls, Zimbabwe. Most weekends we would go for a drive to see the animals, like our own private family safari. Seeing lions in the wild leaves an impression. It’s hard to explain what a magical time that was. Every day was an adventure.'

This doe Patronus is from Levi Pinfold, who says: 'It was suggested that I consider a doe as my Patronus and by a strange coincidence, two deer jumped out in front of my car as I was driving home through the forest late that week. Odd, considering that wild deer shouldn’t exist in the Australian forest. The mystery was explained after some investigation. Apparently, a local farmer and deer enthusiast had introduced them at some point in the past and they have been multiplying here ever since. But I can’t shake the feeling they stopped me for some other purpose… Whatever that may be, the day my Patronus was revealed to me will remain a happy, if strange, memory.'

Liz Pichon has a wolf Patronus: 'I mean, who wouldn’t want to be an all-singing, all-dancing wolf?'

'My Chestnut Mare Patronus found me!' says Eduardo Lima. 'My studio notebook is full of sketches and doodles, always drawn freehand, off-the-cuff and in the moment, so it seemed fitting to draw my Chestnut Mare by hand in my doodle style.'

'I didn't choose my Patronus, my Osprey chose me, of course!' says Miraphora Mina. 'When drawing it, I used my favourite drawing tool which is the dip pen nib, because it takes me back to Marauding on that Map I created for the Harry Potter films.'

Mini Grey's Patronus is a badger. She says: 'I went for a badger because I’ve drawn the badger in the Oxford Natural History Museum a few times and it’s a native animal of the UK – that is often undervalued at the moment. The badger has a fantastic monochrome colour scheme and those distinctive stripes, and strong claws for digging. A down-to-earth, determined sort of Patronus…'

This wonderful elephant Patronus is from Nadia Shireen, who says: 'I was delighted to have an elephant to draw for my Patronus, because I think they are inherently wise and jolly beasts. This fella demanded a hat. I’m not sure why. Or if you’re allowed a hat if you’re a Patronus. Nobody tell JK Rowling.'

Neal Layton's Patronus is a hedgehog. He says: 'I love hedgehogs– and for me, there's something magical about them. Perhaps it's the way they come out at night, and mysteriously disappear in daytime. Although they are wild mammals, their nocturnal visits seem so endearingly domestic! But the sad fact is hedgehogs are declining in Britain. In fact, a third have been lost since the millennium. Thankfully, there are lots of things we can do to help them - go to hedghogstreet.org for some great ideas!'

A fox Patronus from Rachel Suzanne, who says, 'I chose to illustrate a fox as I think they'd be great Patronuses with their cunning reputation. The artwork was made with watercolour and watercolour pencils; hidden in the whisps of the spell are some Potter-themed symbols from the Wizarding World too!'

Here's a cheetah Patronus from Rob Biddulph, who says: 'I like to think that upon hearing my cry of "Expecto Patronum" the creature that would leap athletically from the tip of my wand would be nature's great sprinting machine, the cheetah. It would then run rapid rings around any unwelcome Dementors, before gracefully bounding back from whence it came. I suspect, however, that my actual Patronus would more likely be a member of the woodlouse family. But a) I don't want to admit that, publicly, and b) it's not as much fun to draw.'

Sarah McIntyre's Patronus comes in the form of a dragon, as she explains: 'I chose a dragon because, well, dragons are cool! I enjoyed doing a bit of a mashup between drawing the kind of dragon you might see on a Welsh flag with one you might see on a Chinese urn. They’re both magic.'

Sophy Henn's aardvark Patronus. Sophy says: 'Of all the animals I had to choose from, the aardvark definitely spoke to me the most. While the others were sleek, deadly and extraordinarily efficient creatures, the aardvark, whilst talented in many ways, is definitely its own animal, with a very individual look and unique way of doing things (chewing with their stomachs to name but one). And we all know they love to dance, hence the illustration. (We don't know that exactly, but I have a very strong feeling it is the case.)'

Steve Antony chose a bear for his Patronus, explaining: 'In my mind, bears are strong and wise. They're also soft and huggable. I can call on my Patronus for advice, protection and/or big bear hugs.'

This mole Patronus comes from Steven Lenton, who says: 'I had never designed a mole character before so this was the perfect Patronus for me to create. I love the idea of a small and cute Patronus, which I usually associate with a grander, more elaborate type of creature! This was a daunting but really fun project and I hope we all help to raise lots of money for BookTrust!'

Tom Percival chose a capuchin monkey as his Patronus, saying: 'If I could conjure up a magical animal to help me out in times of need it would HAVE to be a monkey, because most of my problems would be easily solved by having car aerials and windscreen wipers pulled off in safari parks. Wait... that would be no help at all! I didn’t really think this through, can I draw a tiger instead?'

Here's a polar bear Patronus from Yasmeen Ismail, who says: 'The biggest challenge I found with creating my Patronus (other than working in a medium I am unaccustomed to) was trying not to make it look like the iconic Harry Potter art that I had wallowed in for the last 22 years. Indeed, this was to be my Everest.'

26 illustrators signed up to take part in Patronus on a Postcard and chose a huge variety of different creatures to battle the Dementors.

Some picked fantastical animals like a Phoenix or a dragon, while felines including a lion, a cheetah, a tiger and a domestic cat all made appearances. Both a doe and a stag were chosen, along with two different breeds of dog (Jack Russell and husky) and birds including an osprey and a peacock.

Even animals like otters, aardvarks, moles and hedgehogs were represented!

The full list of illustrators taking part was as follows:

Bid on the Patronus on a Postcard artwork

How we make a difference

BookTrust supports children and families to experience the joy of reading and its associated benefits through our programmes and activities.

Open the magical world of books

Help us make a difference to children throughout the UK. We can all do a bit more when we're supported by our Friends.