1. The Bear and the Piano by David Litchfield

One of the odder sights I’ve recently seen was a dumped piano in the car park at the local forest reserve. When I say dumped, it had been neatly, invitingly, offloaded under some trees. It would have been a forlorn act to not give this old piano one last chance at a useful life, to touch someone’s heartstrings.

The first thing I saw, in my mind’s eye, was David Litchfield’s Bear hunched over the keys.

One of the more enjoyable by products of an interest in children’s books is to find echoes of stories everywhere.

The setting of The Bear and the Piano is immediately appealing and intuitively right. Music is a force of nature and Litchfield’s bear discovers music in much the same way children do... bang, crash, tinkle!

Bear’s playing and his dreams of other, wonderful places hint at where the story will take us ...fame and fortune and a long journey far from the forest and friends.

This lovely tale ends in a satisfying place, where it began. A passion for music took bear far, but only served to deepen his place in the hearts of his friends.

2. Once Upon a Tune by James Mayhew James Mayhew’s book, Once upon a Tune, does a wonderful thing. Not only does this book function beautifully as a picture book, but it also draws back a curtain on another scene.

Some of the best loved orchestral pieces, which most of us know by ear if not by name, were inspired by epic folk stories. The picture book format demands a potted version of such works as The Kalevala, (which inspired Sibelius to write The Swan of Tuonela) however Mayhew retains the magic of this and the five other tales.

The necessity for brevity results in wonderful, headlong momentum from one story to the next. The illustrations and design are worth many words, I will simply say that there is a seamless and powerful world created through the book even while representing widely varying content.

Once upon a Tune gives children a narrative frame to adventure into the world of orchestral music, even without the sound turned up. This book is enriching and inspiring on every level. 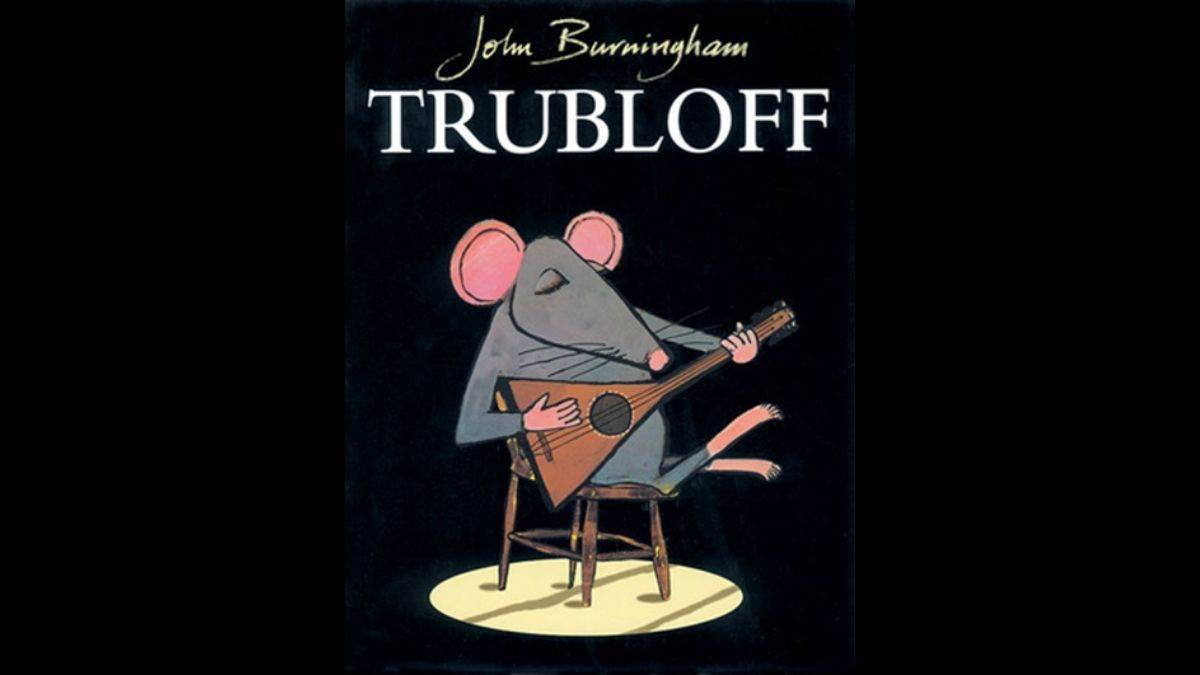 I once glimpsed a photo somewhere, of John Burningham’s work desk. I explored the image with interest, but was unsurprised at the festoon of art materials. As an illustrator, Burningham seemed a brilliant, ebullient, industrious adventurer in paint and was extraordinary at using his discoveries to great effect. He could make you love the character be it in the spindly world of Mr Gumpy or in this case the world of Trubloff; the mouse who wanted to play the balalaika. Written and illustrated by Burningham, the world of Trubloff seems hewn from wood and artfully chiselled into being. This is a story of how powerfully music acts upon us, and in the case of this small, aspiring musician, sweeps him off on an adventure, much to his family’s dismay.

But ultimately, it was Trubloff’s brave plunge that changed the fortunes of his family.  First published in 1964, the world of Trubloff remains a beautiful picture book adventure. I would also venture, that this story was written by someone who understood a thing or two about following your heart.

4. Because by Mo Willems (Author) and Amber Ren (Illustrator) 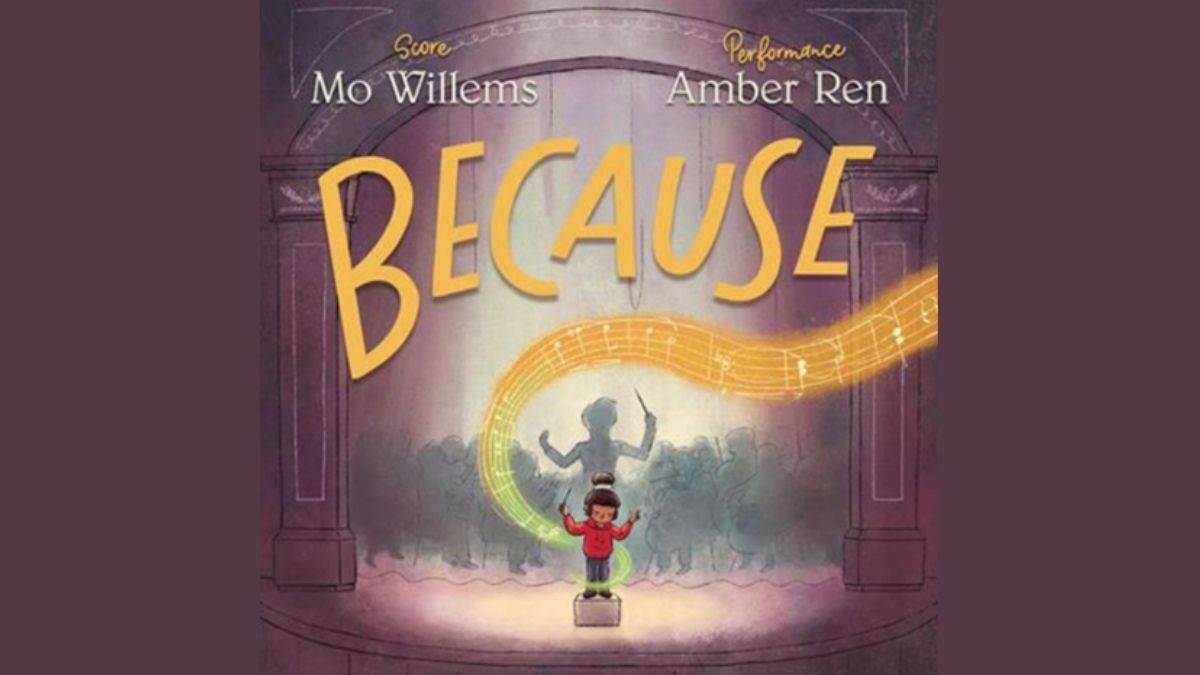 This is a picture book which accomplishes a wonderful thing in its scope and spirit. There is a sense of dominoes falling as the pages turn. The opening scene is an illustration of Ludwig van Beethoven composing and Franz Schubert, who was famously inspired by Ludwig, catches the tune.

Willem’s picture book pulls us along in the wake of events, as those dominoes tumble. Person to person, the inspiration passes; until a small child attends a concert, and she too is inspired to follow the music.

Celebrating not only the musicians, as the events unfold, the spotlight is shone on figures behind the scenes too. With a relaxed grace and skill, Illustrator Ren gives us a world of diverse people. Her handling of the story has a great part in making this feel like a night out at a concert; buoyant and celebratory. The concert hall scenes are grand in scale but nonetheless intimate and gently humorous, keeping in step with the text.

Because will make any child who is moved by music, feel like they are part of something much bigger, a gift that is passed on. When practice gets tough, this might be the nudge that is needed ... to keep going ... to keep playing.

As Willems said, “That is how it happens“. Fred the cat was not what he seemed, in this wry and delightful picture book.

To the astonishment of the children whose lazy pet cat he was, Fred’s secret life is not uncovered until after his demise. As the music loving cat community assemble to mourn, we learn that Fred played in a band called ‘The Heavy Saucers’ and was in fact, famous.

Posy Simmonds MBE, is a much celebrated writer and illustrator of children’s books and graphic novels. Her career as a newspaper cartoonist is shown to great effect in this picture book, in its humour and conversational style.

This is a wonderful picture book in and of itself, and a joy to read; but being the type to moodle, it made me consider how our enthusiasms can outlive us. I cite as evidence the fact that Simmonds successfully pulls off a minor miracle in the case of Fred, a cheerful funeral for a dead cat.

Singing and dancing, Fred is sent off by the children and the cat community.

Music is, like Fred, an unstoppable force of nature.

Music has the power to fling open the doors of emotion and memory, sometimes painfully so. It has a reach that is beyond understanding and can bring solace, healing.

My father plays the zither, a 32 string monster which requires the hands of a boiler maker to play. Fortunately he is a boiler maker. Once, as he played at a nursing home, an elderly dementia resident just sat through the session blankly, until my father began to play a certain tune. Then there was a flicker of recognition in the eyes of the elderly man and then tears. He briefly surfaced from where he had sunken, and it was a haunting experience for everyone in the room that day. Music can do that.

The Mozart question is an extraordinary story about what music can do, and its power to heal. In its telling, Sir Michael Morpurgo, who has a great gift for telling difficult stories very well, deals with one of the gravest themes in our history.

In it, Lesley a fledgling journalist is sent to Venice to interview Paulo Levi, a renowned violinist. However under no circumstances is she to ask the Mozart Question. Paolo, in a series of flashbacks, at last reveals how his parents had played violin in a concentration camp, and under what circumstances they were forced to play.

In a device that is as effective as it is kind to the young reader, The Mozart question is anchored in the present, far from the harrowing events that Paolo recounts.

Illustration plays an immense role in building bridges for readers, and in this book particularly so. Michael Foreman, a masterful watercolourist and exceptional draftsman, builds a bridge into the world of The Mozart Question that is deeply considered and sensitive.

Although this story takes us through a dark time, an event which helped inspire this story points to the hope that lies at its heart.  “ ... the sight of a small boy in a square by the Accademia Bridge in Venice, sitting one night, in his pyjamas, on his tricycle, listening to a busker. He sat, totally enthralled by the music that seemed to him, and to me, to be heavenly”