Joseph Coelho shares an exlusive poem from his new month-by-month collection, A Year of Nature Poems – and explains why nature and the outdoors are such a big inspiration.

January is a good time of year to see starling birds gather in incredible flocks (mostly, outside of cities and towns). When they fly together like this in numbers, we call it a "murmuration".

On his poem about these birds, Joseph Coelho says: 'There is a legend of two murmurations of starlings warring above the city of Cork in Ireland in the 1600s – starlings have never been known to war in flocks but they certainly do fight.'

They were the Rorschach of the winter months,
the folding of sky-shadows,
of air-shoals pirouetting into the January nip,
swarms riding the frosted winds,
silently testing the sky with their ink-magic.

Not ready for the tentacled gathering
that rose from the east
the heat of spring starlings
cloaked in oil slicks
needle beaked
and strong of claw.

The clash of murmurs
was whispered
in a rain of birds
as flightless feathers fell
in the war of winds.

Winter flew into spring,
black storms colliding with hot nights.
The murmurations twisted through one another
winter desperate to stay,
spring determined to arrive.

The people watch as feathers cloak them
farmers clutching hopeful seeds
children gazing with eager fingers
on buttoned jackets.
Which swarm will win this war?

But the birds that come with the sun
are always victorious – the winter flock is tired
their wings have beaten cold into existence
it is time for them to leave.

Beaten and flight-sore the winter murmuration
rides its ribbon away
as spring’s flock swoops into longer days
and brighter skies,
as farmers test the warmth of soil
and children release that first coat button.

Joseph Coelho on writing about the seasons 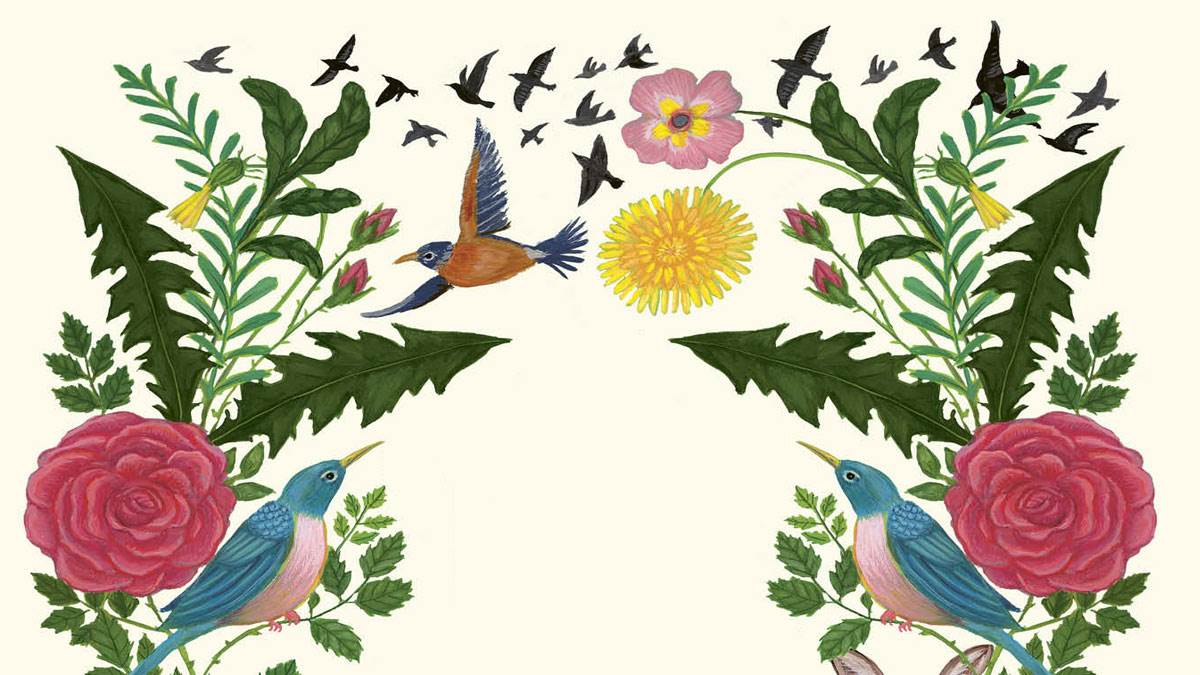 When I set out on the task of writing A Year of Nature Poems, I was excited. I’ve had an affinity for nature ever since I was a young boy. Growing up in the incongruously verdant council estate of Roehampton (a countryside retreat for the rich during the 19th century), I was never far from large open spaces with huge, mature sweet chestnut, beech and pine trees or from ponds pulsing with frog spawn.

Some of my earliest memories involve collecting conkers, playing in autumn leaves and trying to scrape together the courage to pick a toad out of the road. Living in a block of flats, the idea of a garden always held a special appeal.

The 1987 BBC TV adaptation of Gerald Durrell’s My Family and Other Animals had the seven-year-old me daydreaming about the wonder of having a garden to daily explore and discover a wealth of insects under every log and stone. So, when I started out on this collection I found myself returning to childhood memories and my fascination with nature for inspiration.

I was very keen to not only show the changes of the seasons through the lens of the months, but also to demonstrate, within the poems, our connection to nature. I didn’t want these poems to be mere descriptions of seasonal changes; I wanted to embed humanity within those changes.

So, I wrote poems about collecting frogspawn (now hugely frowned upon but not so much when I was young), scrumping (not sure this is a thing anymore) and the delight of sitting out in springtime rain. It struck me that some of my most alive memories are those that have a connection with nature, devoid of technology or distractions.

I also found it interesting that when sifting my memory for these moments they were concentrated in childhood, petering out as I grew older. A lot of this comes down to location – I studied and worked in central London from university onwards. However, over the past six years I’ve lived near the sea and am happy to say that my nature-laden memories are becoming increasingly more recent.

From starlings to jellyfish

The self-set challenge of embedding the poems in our connection to nature led me down interesting research routes. For January, I was very keen to celebrate starling flocks. I’ve spied these incredible displays over Brighton pier. They have a magical, otherworldly appeal, so I was shocked and delighted to come across a legend of two flocks of starlings allegedly warring above the city of Cork in the 1600s.

Starlings are known to be quite rowdy birds and pairs have even been found that have killed each other, however they have never been known to battle en masse! This legend was too irresistible to not include, and seemed perfect as the setting of a war between seasons, the fading away of winter and the coming of summer – a nod, to some extent, to the Roman winter solstice celebration from which we get the Christmas date of 25 December.

Nature, of course, bites deeply into our past and into our humanity, yet we constantly feel separate from it; locked away in artificially lit buildings and staring at screens instead of windows. This disconnection directly feeds into our disregard for nature, so it wasn’t difficult to thread a theme of conservation throughout the poems. Pretty much every aspect of nature I chose to distil into a poem was suffering some sort of decline or negative impact from human activity: from the diminishing frog population, to the climate change driven blooms of jellyfish, to the actual distinction between the seasons themselves as our climate begins to suffer increasingly extreme fluctuations.

But it’s not all doom and gloom – through the writing of these poems I reconnected with many of the simple, free, wonderful treasures that nature has to offer. For instance, I had no idea that daffodils are split into 12 different types that themselves are made up of a huge number of varieties, or that the autumn leaf drop occurs when trees go through a complicated process known as abscission.

There is still so much wonder and magic to be found in nature, and if we can just connect to that childhood curiosity, I hope it will go some way in helping us all live and campaign in such a way as to protect nature in all its wonderful forms.