Want to know more about our new Writer-in-Residence, Nadia Shireen? Well, grab a cuppa and discover the names of all the pets she's owned and why she once danced on stage as a bear. And once you know each other a bit better, we suggest settling down to an online read-along of her latest picture book... 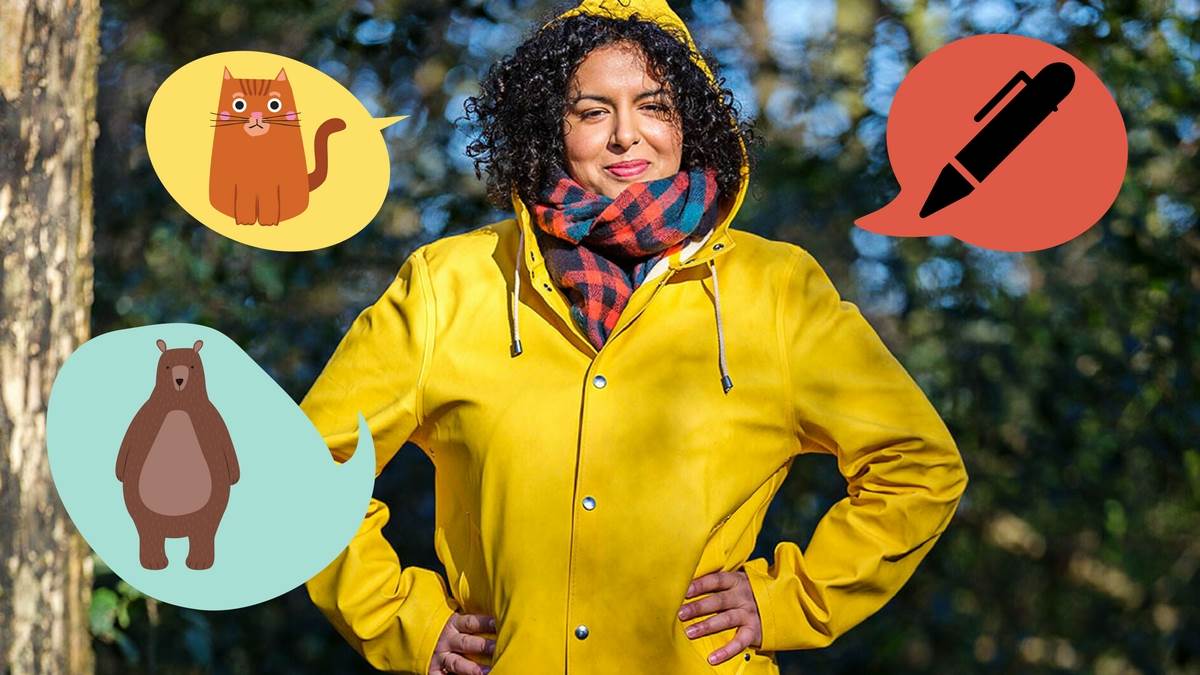 Well, I couldn’t put it off any longer, guys. It turns out that as Booktrust’s Writer in Residence, I’m actually expected to *write* something. Can you believe it? So I thought I’d take a break from painting a giant fresco of Richard Madeley on my kitchen wall to tell you a little about myself because – unless you are deeply unfortunate – we haven’t properly met yet. Also, if you make it through to the end, you will receive an AMAZING PRIZE.

1) I was a socially inadequate child!

I was very shy. But I managed to achieve some credibility in the playground by teaching my peers how to do "bubble writing" and draw pictures of Garfield (a popular cartoon cat, famed for eating lasagne and disliking Mondays).

2) I have always tried to win approval by drawing silly animals!

At school, I was terrible at science, but I charmed my suggestible teacher by drawing funny sheep on the blackboard before each lesson. As a result, she was always extra nice to me, even though I was her worst pupil. Kids, I recommend this tactic. Honestly, you can get away with anything.

3) I grew up near loads of sheep and charity shops!

I lived in a place in the West Midlands called Wellington, which was very quiet and near some nice hills. Famously grumpy poet Philip Larkin was briefly a librarian there. Apparently, he hated it (but honestly, that guy hated everything). While I was growing up, there was a library, a market, a record shop and a train station, so it seemed OK to me.

4) I have owned the following pets:

Tinker (cat), Jenny (cat), Huxley (fish), Elvis (terrapin), Ringo (terrapin), Fred (cat), Elmo (cat) and Cookie Monster (cat). The last two are still alive. Ringo the terrapin actually *ran away*, which is quite a difficult thing for a terrapin to do.

Everyone in my family had straight, thick hair. Well, my dad’s hair had the very slightest kink to it. Then I turned up with a head full of insane curly hair that got so big I would sometimes have to walk sideways through doorways. And nobody told me about leave-in conditioner for YEARS. I am still trying to make friends with my hair. At the moment, relations are cordial.

6) I moved to Sheffield because of pop music!

I could pretend that I went to Sheffield because of the excellent university, but it was actually because some of my favourite bands were from there. I studied law even though I didn’t understand what was going on, and realised quite quickly that I would be a terrible lawyer. OOPS! However, I got quite good at card games, sitting about, going to gigs and eating giant Yorkshire puddings.

7) I moved to London and had a pot plant called George!

I came down to London and started working in the magazine "industry", mainly being a sub editor and production editor. To put it simply, my job was doing picture captions and checking spellings. Some of the magazines were exciting and fun, like Smash Hits, which was about pop music. Some of the magazines were very bad and we shall never speak of them again. My pot plant was named after George Harrison, my second-favourite member of The Beatles (my first is Paul McCartney).

8) I danced on stage dressed as a bear!

I spent about ten years working in magazines, and at one point found myself dressed as a large brown bear dancing on stage at Hammersmith Apollo with an American band called The Flaming Lips. It was very hot and sweaty inside the bear suit but I’m sure I looked pretty amazing.

Look, I’ve put this one near the end because it tends to upset people. I’m still a good person and I promise I will try harder.

Writing and drawing stories for a living is definitely a dream come true. I love my job. However, there are other dreams that haven’t come true. I’ve never been able to fly, haven't got a tail, and have never had an argument with Ant and Dec outside Morrisons. Let’s hope these dreams remain a fantasy.

BONUS REWARD FOR READING TO THE END!!!

I have a most amazing thing to share with you, viewers.

Adam Buxton is officially one of the funniest people in the world. He’s a comedian, actor, broadcaster and general all-round legend. If you don’t know who he is – and if you don’t, what have you been *doing*? – check out his website.

Out of the kindness of his demented heart, he has recorded a fantastic reading of one of my picture books, The Cow Who Fell To Earth. And you can hear it (and watch it) RIGHT NOW! I KNOW! Consider it a little getting-to-know-you present. I hope you enjoy it, and I’ll be back in a couple of weeks with some very exciting news…

Listen to Adam Buxton read The Cow Who Fell to Earth

Read our review of The Cow Who Fell to Earth

The Cow Who Fell to Earth

One night, a little cow falls to earth from the moon, but none of the earth animals speak her language. This lovely book about friendship and belonging is beautifully paced and has all of Nadia Shireen’s recognisable cute characters.

Read more about The Cow Who Fell to Earth

Some other funny books we really love

Picture books to make you laugh

From bottoms and pants to kung-fu pandas and monsters, these funny books will have you and your child rolling about with laughter.

See the booklist
Back to top