Extreme creativity: How to rewild the imagination 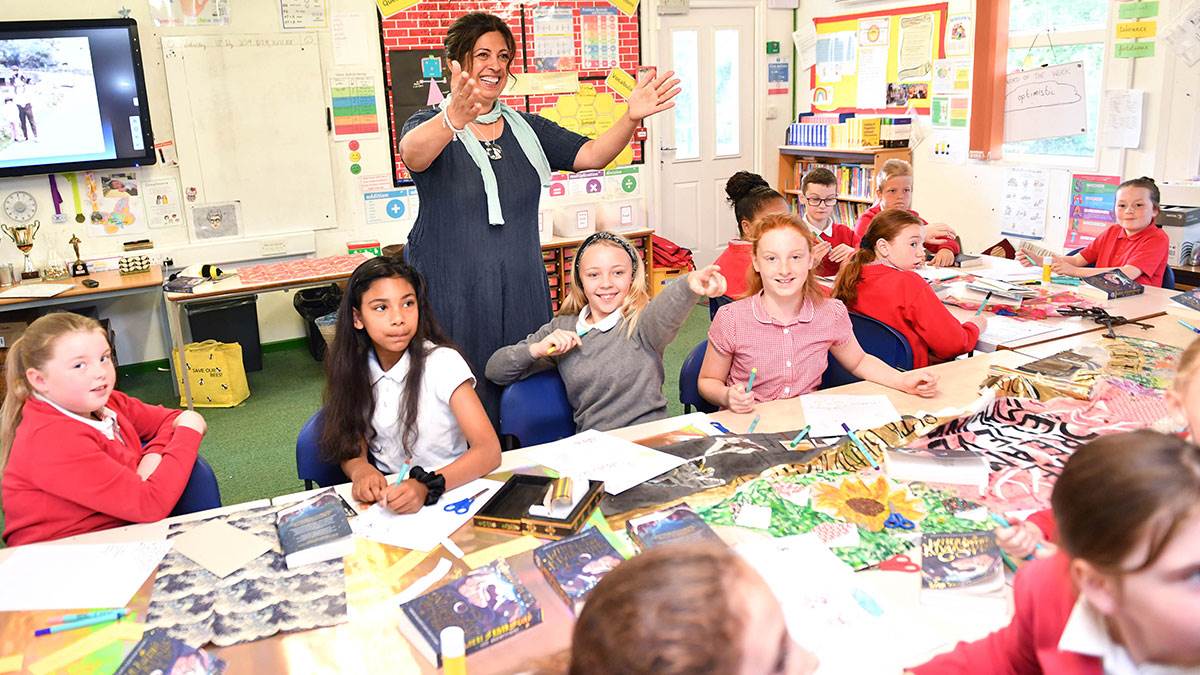 When we think of a superpower, we might think of the ability to fly, seek out the truth, see into someone’s dream world or escape from great peril by shape or time shifting. Every author and artist knows that when these powers are firing on all cylinders, all the above superpowers and more are at their fingertips!

But what if you went through the whole of your school life not knowing what it felt like to have these powers, or believing that these powers were the preserve of the few? Or that stories like the ones your 'Baba Suli’ tells you, stories that you love… are not the kind of story seeds from which storytelling superpowers grow?

Classroom turned into a 'story hive'

In my latest novel Where The River Runs Gold, set in the future Kairos Lands, siblings Shifa and Themba are among the majority of schoolchildren attending ‘Freedom Fields Schools’, receiving a purely functional education (learning how to pollinate crops because the bees seem to have long gone).

Despite their families’ deep rooted tradition as oral storytellers, the children are not encouraged to explore the power of the arts. To paint, draw, sing, play music, doodle or map make, they must head underground into forbidden story hives.

Not so the children at Summerfield Primary School in Leeds, where I visited with BookTrust and fellow author Emma Hill. My story was published just before the summer holidays and I was so happy to hear that ALL the children in the class would receive an early signed copy to read it together in class and then to own.

In the tradition of writing novels set in the future, there are always stark truths taken from the present and the importance of the whole class having access and the opportunity to own the first copies of my book was a real joy to me. In the mythical Kairos Lands only a small number of children have access to books as, following Climate Chaos, the libraries are closed.

I experience writing as a treasure hunt of the imagination. And to enjoy a treasure hunt, you have to be willing to immerse yourself in the experience, to enter into it and to feel welcomed. We were greeted by the iconic sunflower symbol of ‘Freedom Fields’ at reception and a bee hive biscuit tin in the staff room… We did not enter a classroom but a ‘story-hive’ of creativity around the book, including a beautiful wall of Graffitree art, letters of complaint to the Ark Government and creative writing. 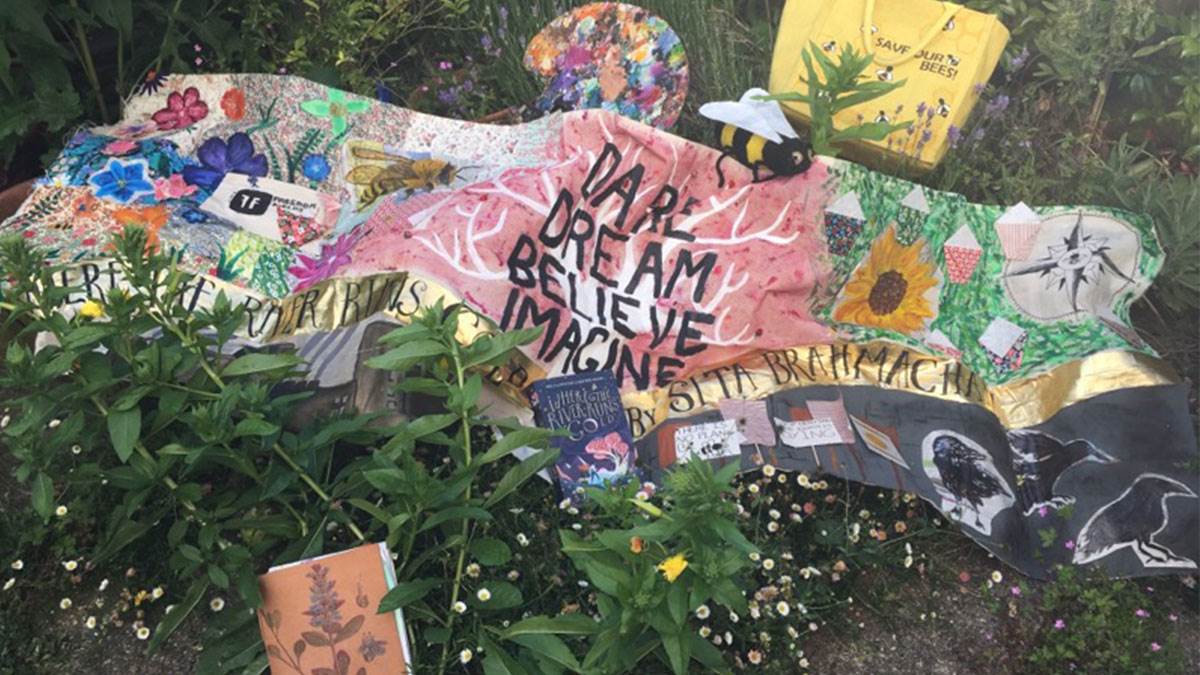 During the course of the day, we transformed the classroom into a hive of activity charged with storytelling and creative art, writing and dramatic superpowers: In turns, the classroom became a:

Stories give you superpowers

In Where The River Runs Gold, the resistance slogan of a regime that threatens to steal children’s childhood is to ‘Dare, Dream, Believe, Imagine’: re-wilded landscapes for children to grow up in, to feel welcomed into.

I was a doodler and daydreamer at school and I encourage children to respond to story in many different ways, such as curating their own seed packets (envelopes) to take home with them and place in their own story hives. 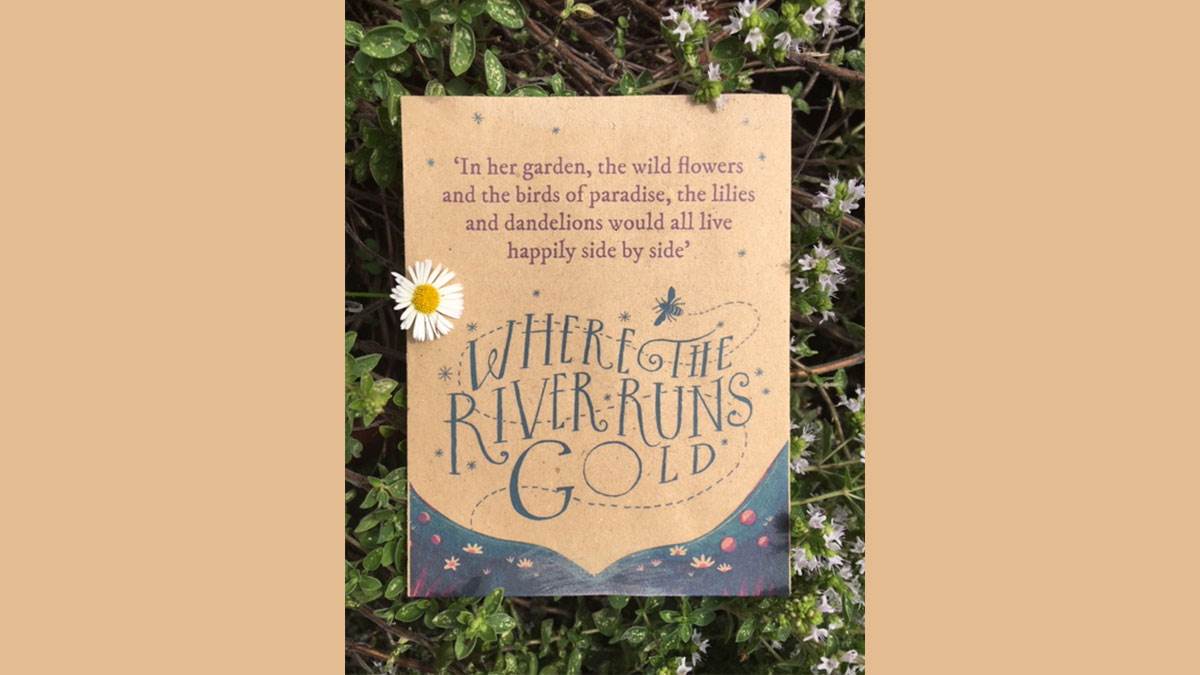 At the end of the day, I signed individual copies of books and some children brought me their envelopes to show and tell of their seedling stories. I was in awe of the way in which the children had brought their own histories, cultures and concerns about the contemporary world to their seed packets. I was especially moved to see one child’s drawing of a young homeless mother we meet only briefly in the story: 'I drew Halonah and Honey because I will always care about them.’

My characters Shifa and Themba learn that stories can contain within them voice-releasing superpowers. These are times of deep societal inequality that call for extreme creativity and a re-wilding of imagination if these superpowers are to be experienced by all children.

Thank you Book Trust Represents for planting these seeds. I am so looking forward to seeing the beautiful and diverse story meadows grow and grow.