Letter from a Laureate: Anthony Browne

Here's what Anthony Browne had to say.

I started my time as Children’s Laureate at the announcement by playing the Shape Game with my brother for the first time in 50 years, and I continued to play and talk about it throughout the two years.

I’m sure most of you know it already as I’ve been banging on about it for a long – a very long, time. The rules of the game are simple: the first person draws an abstract shape – I say it’s like taking a line for a walk; the second person transforms it into something that we recognise. It seems that all children love this game and are very good at it – far better than we adults are.

It’s a shame, but one aspect of growing up seems to mean that most of us start to believe that drawing is for special people called “artists,” not for the likes of us, and that drawing just means reproducing a kind of photographic realism.

I believe that drawing is really a means of communication; drawing, like writing, tells us something. Whenever I talk to children, I always try to impress upon them that authors and illustrators aren’t special people. If I ask a five year old, 'Can you draw?' or 'Can you make up stories?', they always answer 'Yes.' Of course they do. But what happens to most of us as we grow up? We lose this amazing creativity.

I know that playing the Shape Game can help us to keep it. 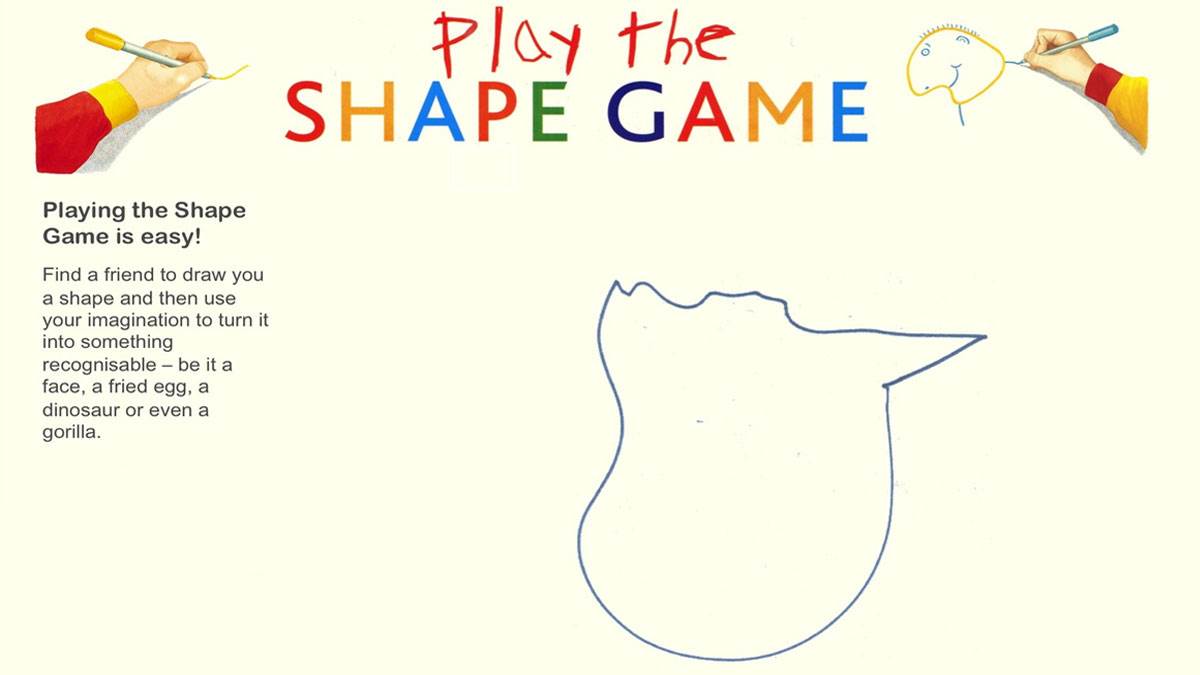 The Laureateship was two full years of hard but extraordinary work: the announcement was followed by a whirlwind of media interviews on Breakfast TV, Newsnight, Newsround, Woman’s Hour, PM, Night Waves and the Sky Arts Bookshow, plus interviews with numerous newspapers including The Guardian, Independent, Telegraph, Times and The Sun. I took part in many festivals, including Edinburgh, Bath, Cheltenham, Stratford, Stockport, Shoreditch, Birmingham, Glasgow, Oxford, Wessex, Belfast, Hay-on-Wye, Sheffield, Southwark, the Imagine Festival on the Southbank, the Scholastic Virtual Literary Festival, and the Festival of Literature in Dubai.

I visited numerous schools, often setting off early in the morning, wondering why on earth I was still doing school visits after all these years, then realising exactly why on the way home, as I recalled the enthusiasm and creativity of the children I’d been talking to. One of the highlights of my time as Laureate was the Scottish Book Trust Tour. As I set off from Gatwick very early one morning, I was wondering if this was such a good idea – six days of travelling around Scotland, two schools each day and in the company of people I'd never met before. I needn't have worried. The trip was a happy mixture of perceptive, interested and interesting children, most of whom had never seen an author and illustrator before, enjoyable journeys with friendly companions, and great sights to see.

Before I became the Children's Laureate, I spent most of my time sitting quietly in my studio painting, but for that week, most of my waking hours were spent talking. Gradually throughout the week my voice became quieter and quieter. I flew home exhausted, silent, but very happy.

I also gave talks and appeared on panels at the National Gallery in Edinburgh, the Baltic Centre in Gateshead, the V&A, the Free Word Centre, the London Bookfair, 10 Downing Street, Cambridge School of Art and University College Falmouth – and saw in these last two places lots of original exciting work by illustration students.

I gave talks and workshops in Seoul, Geneva, Copenhagen, Paris, Nice and Marseilles. I also travelled to Chile and Argentina where I was immediately struck – as I always am in Latin America – by the openness and warmth of the people, and their passionate enthusiasm for books and children.

Wherever I went, I talked about being the Children's Laureate, and about the importance of creativity, visual literacy and picture books.

Despite all the talking I did in the two years, I still managed to publish some books: first a book that I’d already started before the Laureateship, Me and You – an alternative take on the story of Goldilocks and the Three Bears. Then came Play the Shape Game. I sent the same shape to over forty writers, artists and celebrities and they were invited to transform it into anything their imagination suggested. They were also asked to draw a new shape for the reader to transform. The results were FANTASTIC and were put together by Walker Books incredibly quickly to produce a superb book that we were all really proud of. Then we had a wonderful launch at Waterstones in Piccadilly where children, illustrators, writers and celebrities all played the Shape Game. The proceeds of the book and an auction of the artwork were donated to the Rainbow Trust charity.

Shortly afterwards, I was involved with The Sun newspaper and HarperCollins on a national competition to inspire children to be creative and use their imaginations. I began a story of 'Bear and His Magic Pencil' and children were invited to complete it. I thought it was a good idea for a competition, but when it was suggested that the results could be published as a book, I was extremely wary. 'This isn’t how books are written!' I thought. But when I saw the proofs and the combination of the children’s fresh, imaginative drawings with my backgrounds, I was delighted. Later, when I met the children at the launch party, it was touching to see their excitement at seeing their work published in a REAL book, which sold amazingly well. As an added bonus, all royalties from sales of the book were again donated to Rainbow Trust.

Picture books – not just for babies

Another book that I started before the Laureateship was a memoir with my son Joe, and this was published at the same time as a wonderful exhibition of my work at the Seven Stories Museum in Newcastle. This was one of the personal highlights for me from the whole two years, along with a massive exhibition of my work at the same time on tour in Korea. Both these exhibitions powerfully demonstrated that picture books aren’t only for babies.

Another highlight was when I joined musicians from the Aurora Orchestra, narrating Willy and Hugh alongside music by composer-in-residence Luke Bedford at the Wigmore Hall.

I judged many children’s drawing and painting competitions, including one for the Radio Times Royal Wedding cover, and I was also one of the judges for the 2011 BookTrust Best New Illustrators Award. This was a superb opportunity to promote ten brilliant illustrators at the beginning of their careers, and it was one of the many occasions when BookTrust and I joined together in my stated aim two years earlier as Laureate to 'promote the enjoyment of children’s books, particularly picture books.'