Sharna Jackson inspires the next generation of authors in Bristol

Yesterday, the brilliant author Sharna Jackson was in Bristol, visiting pupils at Henleaze junior school and Whitehall junior school. Sharna spent time with 150 students, talking about her debut novel High-Rise Mystery, the inspiration behind the characters and where she gets her ideas for stories from. 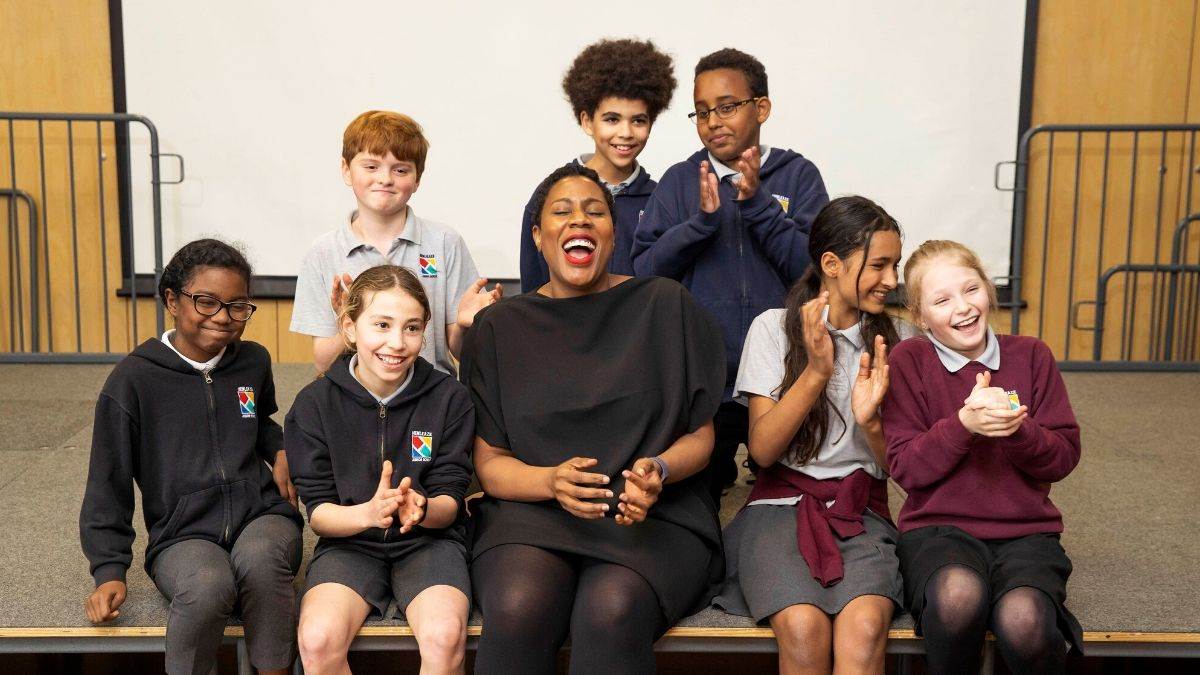 BookTrust also gave away free copies of Sharna’s debut novel, High-Rise Mystery to every pupil. Published by Knights Of, an inclusive book publisher based in London, High-Rise Mystery features a sibling detective duo who everyone’s dying to meet. Set on an estate in South East London – during a heatwave – Nik and Norva have to solve the murder of fellow resident and art teacher Hugo Knightley-Webb, before someone they love gets pulled into the frame. Sharna’s second second book, Mic Drop follows the detective duo Nik and Norva as they try to solve another murder. Mic Drop is published in April.

Talking about the day, Sharna said: “The staff and pupils were absolutely brilliant. They were so welcoming as soon as I walked through the gate — I loved the energy of the children. They were all super engaged and asked lots of insightful and fun questions. All in all, an ideal school visit.”

Talking about Sharna’s visit, Betty, aged 11 from Henleaze junior school talked about how important it was to see someone who looks like you: “I like that she’s a black author. Lots of books that I have are by white authors, which I can’t relate to. It means a lot that she looks like me.”

Throughout the week, Sharna and a collection of authors and illustrators that included Jasbinder Bilan, Chitra Soundar, Zanib Mian and Sav Akyuz, spent time with over 500 school children from eight Bristol based schools, organised by BookTrust, the UK’s largest children’s reading charity. BookTrust also involved 16 emerging writers to accompany the established writers on the school visits, to allow them to get first-hand experience of school events.

One of the authors shadowing Sharna, Emma Norry said: “Their little faces lit up. They couldn’t get their hands in the air quick enough. From the boy who yelled excitedly, 'Is that Sharna Jackson?' from across the playground, to the girl who asked whether Sharna thought the colour of her skin held her back in the publishing industry."

Jill Coleman, Director of Children’s Books, BookTrust said: “I’m proud that BookTrust Represents is leading the way in promoting authors and illustrators of colour and inspiring future generations. Sharna was a roaring success with the children at Henleaze and Whitehall primary school. They were full of excitement and were hanging on her every word, I hope there are now some budding authors and illustrators in each class.”

Sharna Jackson is the Artistic Director of Site Gallery, Sheffield and a board member of Sheffield Doc/Fest, Upswing Aerial Arts and New Writing North. She has previously worked as a creative producer with the Tate, BAFTA, The Design Museum, The Royal Collection Trust, Museum of Childhood, V&A, Science Museum, Penguin amongst others. An advocate for dive…

BookTrust Represents has been created to promote and improve the representation of People of Colour in children’s Books.

It is important that all children have the opportunity to read a diverse range of books where they and their communities are represented.