How books can spark imagination at playtime

Holly Rivers is a children's play-worker, so she often finds herself blowing bubbles, playing with puppets, or pretending to be an alien for a living - which sounds like the best job in the world! She talks about how books can be used in schools to encourage creative play. As well as writing books, I blow bubbles for a living.

Because, being a children’s play-worker and after-school workshop leader, I get paid to play! Whether running interactive sessions for toddlers and their grown-ups, or leading summer holiday clubs for primary school children, my work allows me to engage in an imaginative way with youngsters of all backgrounds and abilities. No day is ever the same.

Perhaps the best part of my job is being able to incorporate books, stories and reading into my everyday practice. Playtime can be enhanced by literature, in the same way that literacy skills can be improved by play. And with increasing pressure on schools to focus on academic successes and appeasing governmental requirements, rather than nurturing a child’s natural instinct to play, I think it’s more important than ever that we find holistic ways to rekindle imagination, exploration and ‘childishness’. I see books as the perfect tool to do this.

For example, this month I have already read Winston is Worried with a class of Year 1 and 2 children, which resulted in an imagination-rich play-session involving poodles, pugs and sausage dogs! I’ve also discussed the various superpowers in Ali Sparkes’ The Shapeshifter series with a group of nine-year olds, who later began to write their own scripts about superhero schools. At the moment I’m preparing a sensory storytelling session for toddlers and carers based around a picture book — but what title do I choose to read? Guess How Much I Love You by Sam McBratney? Or Each Peach Pear Plum by Janet and Allan Ahlberg?

As a play-worker, allowing myself to be ‘silly’ and ‘playful’ comes quite easily, but I can appreciate how unnerving this might be for other adults, especially if you’ve been sat at a desk doing a ‘grown up’ job all day. So here are some of my favourite ways to incorporate literature into play, which can be used within the home or outdoors, as well as in the classroom or after-school club. 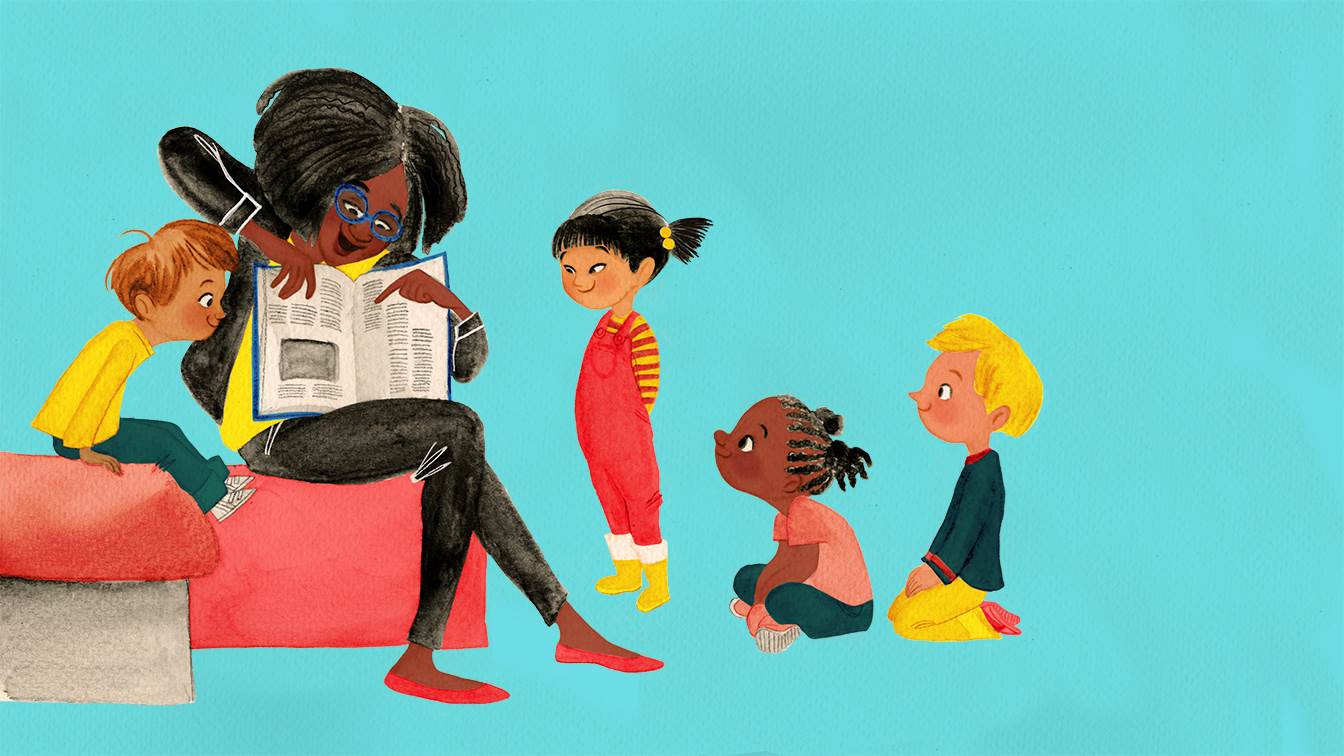 Ideas for babies and toddlers:

Adding sensory activities to books can really help bring a story to life. For example, the colourful gastronomic illustrations in Eric Carle’s picture book The Very Hungry Caterpillar are perfect to explore within an edible sensory-play session. I like to put out samples of food that the caterpillar comes across (fruit, cake, sausage, cheese, ice cream, etc) and as you go from page to page in the book, let the children explore the foods’ tastes, smells, temperatures and textures. You can also chat about the different colours and shapes that you see.

To help nurture a youngster’s love of the great outdoors, I enjoy using books about nature alongside elements of forest school play. Outside Your Window by Nicola Davies is a wonderful book to explore as it concentrates on a child’s first experiences of the natural world. If you have access to a forest, wood or garden, you could build an outside ‘reading den’ for the children to sit in while you read the book together. Then, encourage them to find some of the natural elements described on each page — feathers, sticks, pebbles, leaves and maybe even some wriggling worms.

There are so many wonderful books for this age-group that can encourage creative and dramatic play. Within my drama classes I like to theme a term around a specific book, using the characters, locations, dialogue and plot as a starting point for games and improvisation. For example, Roald Dahl’s Fantastic Mr Fox might inspire a game of ‘Fox’s Footsteps’ — a variation of grandma’s footsteps where the children have to sneak up on Boggis, Bunce or Bean. You could then go on to play a round of ‘Woodland Commands’ where the children are encouraged to move around and interact like the various animals in Mr Fox’s wood. You can also choose your favourite scenes or chapters to act out.

Demelza and the Spectre Detectors by Holly Rivers is out now in paperback (£6.99, Chicken House)

Demelza and the Spectre Detectors

Demelza is a madcap inventor, but it turns out she’s something stranger – she can conjure up the dead! But who is kidnapping children? This is a fun and energetic story, containing some themes (such as raising the dead) which adults may wish to exercise caution before sharing with children.

Read more about Demelza and the Spectre Detectors

Stay up to date with our newsletters

Sign up to our Families or Early Years Practitioner newsletters to get great articles, book recommendations, competitions, resources and programme updates straight to your inbox.