Shaun Tan: On 'The Bird King'

Shaun Tan grew up in the northern suburbs of Perth, Western Australia. He graduated from the University of WA in 1995 with joint honours in Fine Arts and English Literature, and currently works full time as a freelance artist and author in Melbourne. His books include The Rabbits, The Red Tree, Tales from Outer Suburbia and The Arrival. His latest book The Bird King is a treasure trove of the sketches behind his books. 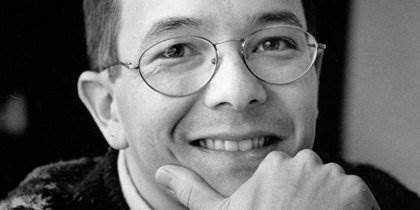 Shaun has also worked as a theatre designer, and worked as a concept artist for the films Horton Hears a Who and Pixar's WALL-E, and directed the Academy Award winning short film The Lost Thing which won an Academy Award this year. In 2011 he received the prestigious Astrid Lindgren Memorial Award, honouring his contribution to international children's literature.

We recently went to hear him in conversation with comic book expert Paul Gravett. Read a blog post about it here. He kindly answered a few more questions for us.

You mentioned the importance that anyone should be able to read your illustrations, that your books should 'hit you in the heart and in the head'. Can you tell us more about this?

I like to avoid anything that is too culturally specific or that would require the reader to know something other than what they can understand from a picture. In other words, no symbols or allusions, at least none that are critical for a good interpretation.

For instance, in The Rabbits there are a number of references to Australian art and history, but they don't need to be known, they are more of a useful scaffolding upon which to build more universal ideas; in that book, to create a strange parallel universe that conveys the impression of how bizarre it must feel to be colonised by an unfamiliar people.

As a result, the story is equally accessible to someone from Brazil or Lapland as much as Australia, and for children as much as an adult. Within a surrealist fable, everyone observes each scene from a common distance, a level conceptual playing field.

I do actually write with an older audience in mind; or at least to a general audience that might include children, but that's often a secondary thought. More to the point, I think my stories often end up being about childhood (for whatever reason) rather than being intended specifically for children, so they also happen to include them. I'm interested in the way that a child, as a new person, looks at the world, and how this has parallels to many adult experiences, such as immigration, colonisation or other major transitional experiences.

You have said that you wanted to break away from the confines of the 32-page-picture book. How do you feel about the digitalisation of picture books? What impact do you think they will have on publishing and reading? Would you be interested in making one/adapting an existing book?

I'm open minded about this, and don't feel that any medium is inherently good or bad. People adapt. It's really a question of using it wisely and appropriately, as has been the case with every advance, from cave painting to the printing press.

I think we are in early days, where the new medium more or less imitates the old, sometimes awkwardly, but eventually it will find it's own field of expression and you will see more work being created specifically for the electronic screens. I'm far from that point myself, and still feel quite attached to the printed page. But I'm not wedded to it and can imagine adapting my practice, as I have done already with some theatre and animation productions.

What do you think of the relationship between imaginary landscapes and our sense of the past, present and future?

Well, everything is imaginary when you think about it, there are just different degrees and contexts. Even when you look at something right in front of you, there's some imaginative activity at play, a lot of it done automatically and subconsciously, and the same happens of course when we read. That's heightened when we think about the past or the future, because they don't really exist except in our mind.
Fiction can play on that, as stories or illustrations. I'm particularly fond of using history as a basis for story-telling, because it's so close to being an imaginary alternative universe already.

You describe your illustration process on your website but do you ever do anything digitally as part of the process?

Yes, at the beginning and end of an illustration, but not much during the long middle part, where everything is put together using fairly traditional media - paper, paint, glue, collage, all physical stuff. I work digitally a little on rough drawings, scanning them in, cutting them up and moving elements about in photoshop, all things that I used to do more laboriously with scissors and tape. It's a great way of testing multiple layouts of image and text to see what works.

At the very end of an illustration, I will sometimes do a few tweaks to a scanned painting or drawing, usually adjusting colour and contrast only, but occasionally adding effects such as cracks, stains and other textures (you see this quite a bit in The Arrival).

The Lost Thing was on the Booked Up programme last year. Did the programme introduce you to new audiences?

Yes, I had quite a few emails from kids in the UK, mostly hoping I could help them out with their homework assignments! Well, it's always good to encourage primary research! No doubt the programme did introduce the book to a new audience who would otherwise not know of it at all - I think that on the surface it can seem a quite obscure and odd book, and only 'friendly' and accessible when you spend a little time examining it. Introduction via a reading programme is one such entry point.

The book originally came out in Australia over ten years ago, so I occasionally have people in their twenties coming up and saying they were made to read it in primary school, and continue to enjoy it well into adulthood. In fact, I think I've reached a lot of my adult audience that way: just waiting around for them to grow up!

A foster child in Nottingham loved Eric and said it really inspired her. She felt she could really relate to the story. Do you have similar stories of people who have told you about how your books have helped them?

Yes, that's the most interesting and unexpected feedback. You have to remember that most artists and writers work from a fairly personal impulse, and even quite self-indulgently, not actually speaking very directly to an audience at all. At the same time, readers connect very closely to them, because we are all trying to tap into common, universal feelings.

In many cases, I've had readers of one book in particular, The Red Tree, explain that the book had saved their life, both metaphorically and literally, when they had experienced depression and suicidal thoughts. I had never thought that would be the case, although it makes sense, as I was resolving some of my own experiences of depression through that work.

You have worked on books, theatre and film - what are the things you enjoy most and least about each medium?

Books: they can be an intensely personal medium for capturing a subtle nuance, because you can work in complete isolation and - if lucky - with your own ideas alone, allowing time for them to wander.
It's difficult for the the same reason, as collaborative works such as theatre and film can often be more dynamic, since there is input from many different minds. Then again, that collaborative approach naturally comes with its own problems, as with any committee-based project.

There are also numerous specific technical problems with each medium: colour reproduction in books, time and budget constraints in theatre, and multiple technical headaches with animation. On reflection, I tend to prefer books, largely because they are structurally simpler and more practical to realise.

You have won many awards for your work. What was it like at the Oscars and what did it mean to you to win the Astrid Lindgren Memorial Award? Where do you keep your awards?

To give the short answer, both awards were quite surreal (my very honest remark on receiving the Oscar on stage from Justin Timberlake) and strangely overlapping. The Oscars were like a bizarre side-step into an unfamiliar universe, as I'm not an experienced film-maker, a bit of an interloper really; the Astrid Lindgren Memorial Award was more central to my everyday concerns as a writer and illustrator, and in some ways a more comprehensive (albeit less media-blitzed) award, involving quite a deep investigation of my work over the past fifteen years or so.

I keep the Oscar statue at home sometimes, but mainly in the production studio where our film was made, given that it was a team effort, and not an individual award (I don't feel it's mine alone). The ALMA certificate is enormous, and still 'in transit', I think currently at the Swedish embassy in Canberra - not sure where I'll put it when it gets here as we have no wall space!

This list changes often as my mind wanders! But here's a shot at it: Where the Wild Things Are (Sendak), The Three Golden Keys (Sis), Jimmy Corrigan(Ware), The Snowman (Briggs), The Mysteries of Harris Burdick (Van Allsburg), The Island (Greder), Fox (Wild and Brooks), Maus (Spiegelman), Ghost World (Clowes), and American Born Chinese (Leun Yang).

Who are your favourite illustrators working today?

Gosh, there are a lot - many I might not even be able to name off the top of my head. But Raymond Briggs was a big influence, as well as cartoonists Ralph Steadman and Gerald Scarfe early in my career, and Ian Miller - there's an idiosyncratic line-work that's very striking in much British illustration history too.

I actually should follow the world of contemporary illustration more closely, there's so much good stuff being produced these days, it's hard to keep track. I spend most of my time looking at general painters and sculptors: In British art, influenced by Francis Bacon, Henry Moore, Walter Sickert, LS Lowry and many others.

You have some great tips for aspiring illustrators on your website. Can you give us your top tips?

Examine all those books that are both popular and critically acclaimed, and those that you love personally, and think about what they all have in common. Part of this constitutes market research, getting to know the culture of picture books, and working within that culture.

One quality you will recognise is simplicity: stories that get to the very essence of their subject, and have a metaphorical, fable-like quality. They are not didactic or explanatory either. The other top tip: practise and persistence, as with any other job.