Today, BookTrust, the UK’s largest children’s reading charity, has presented its Lifetime Achievement Award to the playwright, poet, and children's writer John Agard. John is the first poet to receive the prestigious award for his outstanding contribution to children’s literature. 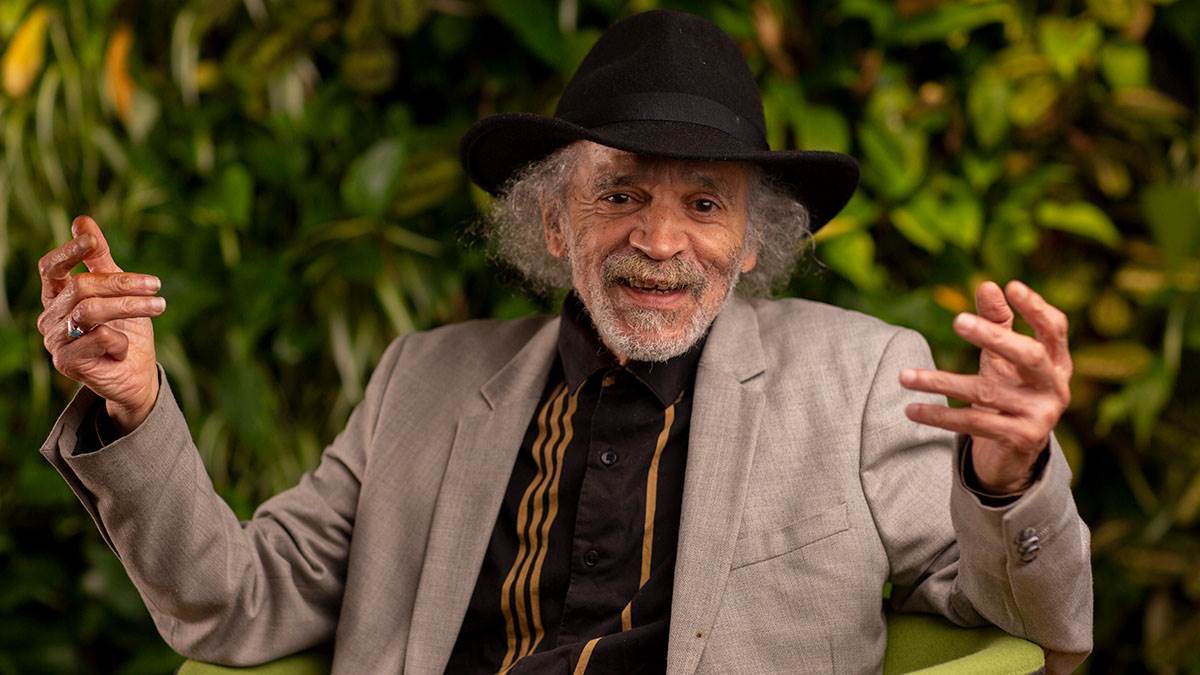 John has published more than 50 books, including poetry for all ages, stories, and non-fiction. In 2012, he was presented with the Queen’s Gold Medal for poetry and has seen his poems Half Caste and Checking Out Me History studied by thousands of students as part of their GCSE curriculum.

Growing up in Guyana, John developed a love for language from the cricket commentary on the radio to the Caribbean Creole he heard at the market. He worked in jobs surrounded by books and language – including in a library, as a teacher and writing for a newspaper – before moving to England in 1977, where he became a touring lecturer for the Commonwealth Institute to promote a better understanding of Caribbean culture. Over the course of the next eight years, he visited 2,500 schools and realised poetry was a way to connect and inspire the children he met. Now, his poems and stories are read, studied and adored by children and adults across the world.

The BookTrust Lifetime Achievement Award celebrates the body of work of an author and/or illustrator who has made an outstanding contribution to children's literature. The judges highlighted John’s persistence and creativity in championing and challenging the language norms that too often dominate literature and the curriculum as well as his ability to connect with children today and inspire them to reach for their goals and aspirations, whatever they may be.

On being recognised for the Lifetime Achievement Award, John said:

“It means a lot to be given this award by BookTrust – an organisation which treasures books and tries to make them part of a life-enhancing experience for a child. It excites me that I’m the first poet to win. I feel happy that I’ve stuck with this craft since I was 16-year-old boy writing in a classroom in a Caribbean ex-colony. It’s not just me receiving this award, but all the people that inspired me. People like my teacher Father Maxwell, the people who published my books, those who contributed to my journey way back in the Caribbean, and John Arlott, the legendary cricket commentator who inspired me with his words.

“This thing called poetry has power and I still get excitement from language. I find joy in standing in front of people and reading a poem.  I know this thing connects. This thing could touch a soul. This thing doesn't have to be didactic; I don't have to preach to people. My whole brain is on a tidal wave of delight.”

“John’s incredible words have caught the imagination of a whole generation of children. Over the years, teachers, school librarians and students have talked about how John’s poetry captivated their classes, whether they have seen him perform in person, or have simply read the poem aloud to themselves. Poems, such as Half Caste and Checking Out Me History, have no doubt challenged and changed how poetry is studied and enjoyed in the classroom and demonstrated that it is a modern and relevant medium with the ability to connect with children, whatever their background.

“I’m particularly thrilled that this year’s award is going to someone who explores and experiments with different ideas and genres, showing children and adults everywhere just what language can do and demonstrating the power of an authentic voice when it comes to storytelling - important messages that children today, whatever their background need to see, experience and have access to.”

“John Agard has helped to change the scope of children’s literature.

"He revels in a range of language from the everyday to the specialist, embracing the possibilities of English, and bringing sources we might think of as rarefied – Dante, the Greek myths, scientific terminology – into the experience of all youngsters. As a performer and as a writer, he has spread his enthusiasm and his joyous delight in words and stories to his audiences for decades and opened doors for them all as readers and writers. His work is full of fun, but it also tells young people that nothing is too ambitious for them to engage with.”

The prize is managed by BookTrust and comes with an Honorarium of £5,000 provided by Arts Council England.

More about the award and this year's winner