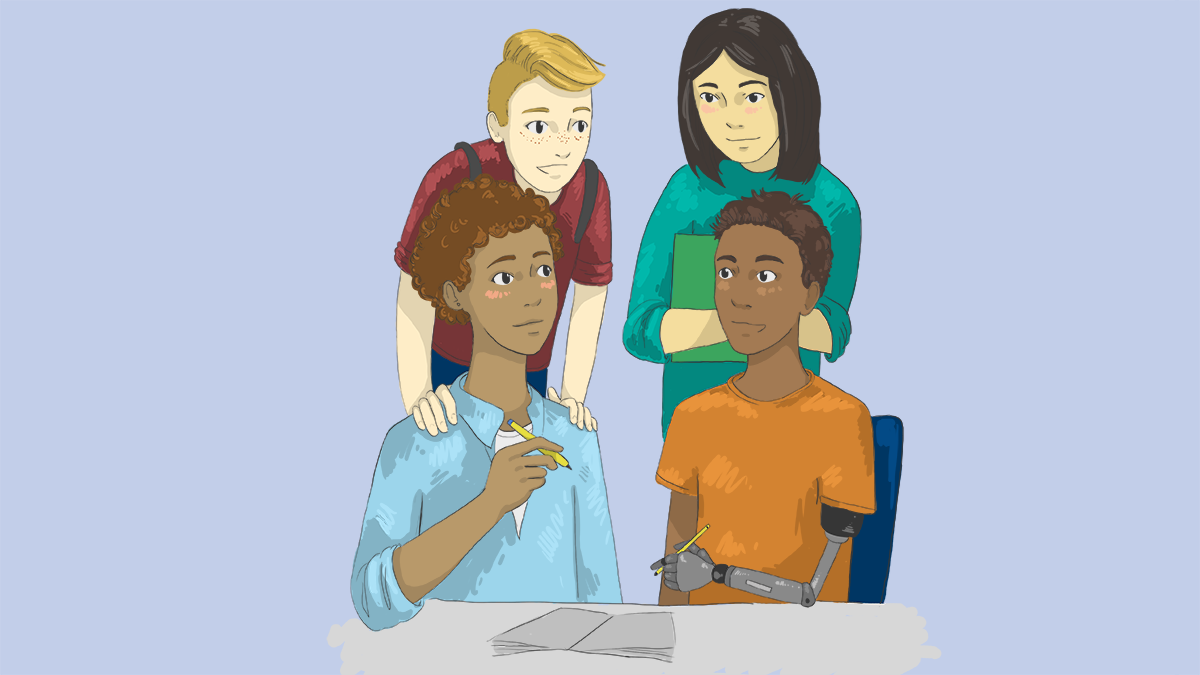 When it comes to including disabled characters as 'casually' as possible, some forms of disability are definitely easier to represent than others.

As we've already started to touch on in this blog, a wheelchair, for example, is a universally recognisable image. This makes it relatively easy to include a wheelchair-using character in a picture without having to even comment on the fact. Even in narrative, you can touch on a character's use of a chair without having to make it a major part of the plot.

However, isn't it also important to try to include the less 'obvious' or 'visible' forms of impairment? And if so, how do you go about representing them 'naturally' and 'casually'? You might, for example, want to try to include a character who just 'happens' to have learning difficulties, dyslexia, ADHD or autism. How do you avoid focusing overly on the impairment instead of the person?

Well, if the story contains pictures, there may still be ways of indicating the form of disability visually. It may just not be as readily recognisable as a wheelchair.

In Big Ben by Rachel Anderson and illustrated by Jane Ray, the narrator's brother has Down's Syndrome and the artwork and text come together and create a really likeable and realistic character. Jane's images of Ben indicate physical characteristics of Down's Syndrome and this is reinforced by behavioural traits described in the story, but it is done subtly and sensitively, to avoid resulting in a caricature.

What about dyslexia? Whilst it's quite easy to find books 'about' dyslexia, it's much harder to find characters who just happen to be dyslexic. Notably dyslexic heroes include Oliver in A Dog Called Flow by Pippa Goodhart, Percy Jackson (created by Rick Riordan) and more recently Henry Winkler's Hank Zipzer. However, what if you are simply wanting to indicate dyslexia in a picture without reference? This is harder, but there might still perhaps be ways. For example, some people who are dyslexic find tinted glasses can help them with learning and reading. The colour of the tint depends on the individual's specific situation, but might be red, pink, green or blue. So picturing someone using tinted glasses could be a way of hinting at dyslexia without needing to reference it. Actress Kara Tointon struggles with dyslexia and she talks about how such glasses helped her.

A little research like this can make all the difference in creating a really convincing character. While you don't need to be an expert in every form of disability, developing at least some knowledge can certainly help – particularly with subjects like ADHD and autistic spectrum disorders, where the risk of characters appearing stereotyped can be particularly high. Talking to people who are disabled themselves or who have first-hand experience of a particular impairment is invaluable.

Even a little bit of research can go a long way. And it's better to at least try to include a disabled character – even if it's only a brief reference or someone pictured in a group scene. It may be that the vast majority of people do not even notice your subtle visual references to dyslexia or Down's Syndrome – but does that matter? Surely part of the beauty of good inclusive practice lies in the fact that it is natural and understated.

Check out these books with positive images of disability