Today I was caught by an old memory I have of my mum, when I half-overheard, half-didn't-hear, a conversation she was having with her friend. It was after school, I remembered. They were quite close to each other as they spoke, their heads dipped together. 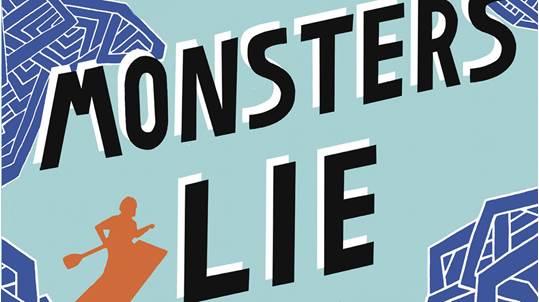 I was about to just walk over to them but something stopped me. It might have been the way that they were standing or the low pitch of their voices, but I realised something was wrong.

I was sure, although I can't remember why, that they were talking about something bad happening to someone they knew.

When they saw me there, they stopped talking straightaway. They pretended that everything was nice and normal. They painted smiles on their faces, they asked me about my day. They didn't fool me.

I often wondered as a grown up what it was that they were talking about but when I've asked my mum about it years later, she says she doesn't remember, she says that it was probably nothing. I believe her; I don't think she's hiding anything but I still believe that there was something that they did not want me to overhear that afternoon.

When I was writing Where Monsters Lie, I kept returning to this memory because the characters in the story, Effie and Finn are trying to make sense of what is happening in their world around them when the adults are trying to hide it from them.

They catch glimpses of their parents struggling, they overhear conversations that they shouldn't be listening to, and together they discover the truth.

I'll make up stories in my mind about what it could have been that my mum was talking about to her friend although I know that I'll never know now what it was. Maybe that's why I feel addicted to writing stories – they are a way of filling in those gaps.