Children’s Laureate Lauren Child talks to us about inspiring every child to daydream – and reveals the childhood books that won her over as a girl. 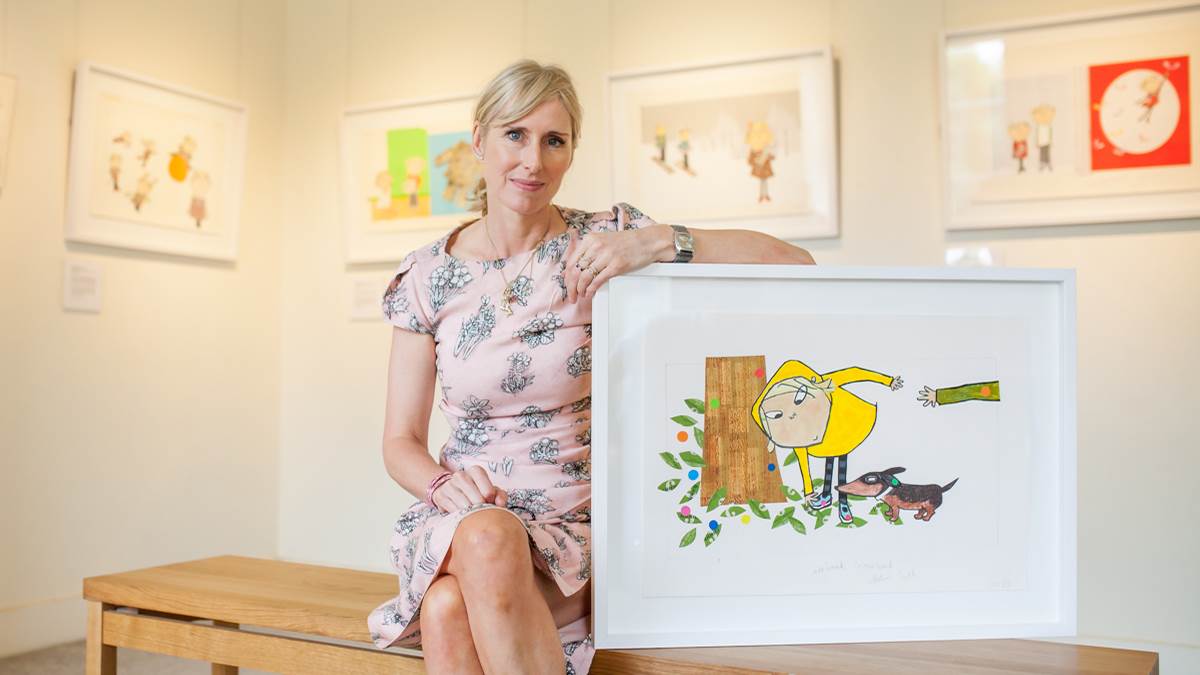 How does it feel to be the Waterstones Children’s Laureate?

Being the Children’s Laureate is a great honour but it’s also a great responsibility.

It’s slightly surreal, partly because my career began almost 20 years ago, exactly the time Quentin Blake was the first Children’s Laureate. Quentin was a huge influence on my becoming an illustrator.

I remember watching him on television back in the days when the BBC had a programme called Jackanory. It was so wonderful to see live drawing as the story was told, and in fact Quentin Blake was the first illustrator I realised was an actual real person. It was so abstract in those days, you didn’t have the same chance to meet authors and illustrators as you do now!

Tell us what you plan to do as Waterstones Children’s Laureate...

I’m interested in championing children’s creativity and want to encourage children to spend a little of their time looking, listening and making things because they’re driven to create. Look out for my new Staring Into Space blog, which will be coming in the autumn, where I’m going to hopefully help inspire that.

I also want to champion reading and drawing for pleasure and to elevate children’s books illustration to the level of other art forms. I think illustration is seen as something less than fine art, and writing for children as slightly less than writing for adults. I think we can be a little bit patronising about it. That’s a shame, because we know that literature is life‑changing for children and the first art we really get up close to is in books. That’s where we begin with reading and storytelling. We do children a disservice if we can’t see and celebrate its power.

I also want to talk about diversity, as inclusivity is really important to me. There aren’t enough books written by and about people all kinds of backgrounds and culture. It’s important because if as a child you don’t see yourself on the front cover of a book, then how do you feel part of society?

I’m also really interested in exploring creative collaboration. Sometimes it might seem an unlikely pairing – for example, when I worked so closely with mathematician Marcus de Sautoy, who helped me make all the codes for Ruby Redfort. And I was utterly thrilled to collaborate with photographer Polly Borland when we made The Princess and the Pea together. I also collaborate every single time I make a book because I always work with an editor and a designer, and if I didn’t have them, my books would be different.

Which books, authors and illustrators are your main inspirations?

I have so many. When I was a child I loved The Secret Garden by Frances Hodgson Burnett. I remember reading it when I was about nine years old, and as soon as finished it, I read it all over again immediately.

Another is Astrid Lindgren’s Pippi Longstocking. I loved her because she was a child like no other. She was a girl and she was funny and there weren’t enough books about funny girls in those days. She’s very courageous and doesn’t really care what people think about her in the best possible way. She doesn’t worry about what she’s wearing and doing and she is able to be herself.

Another particular favourite book of mine was The Shrinking of Treehorn by Florence Parry Heide, illustrated by Edward Gorey. I loved Quentin Blake’s illustrations as a child, particularly Grimble. I also really liked John Burningham’s picture books, such as Granpa, and John Patrick Norman McHennessy, The Boy Who Was Always Late. There’s something pleasantly anarchic about these book that appeals to me, and I love the way these stories see things from the child’s perspective.

Other influences on me are Angela Barrett’s work from Snow White and The Princess and the Pea, Ronald Searle for his Molesworth and St Trinian’s illustrations, and Sara Fanelli’s myths and legends book.

When you were growing up, did you feel like Pippi Longstocking?

No. I was terrible at being myself. I was very self-conscious and worried about what people were thinking. Am I wearing the right thing, am I saying the right thing? All of my characters in my books now are at least moving in the direction of being themselves.

How important do you think it is for children to daydream and stare out of the window?

You can’t come up with anything without  a certain amount of boredom, because boredom is the beginning of invention. Solving problems and letting your mind wander and find the edges of something. It’s how you get to an inspired place and become creative.

When I get really struck in my own work now, I go out and look around at things. I go to the cinema, an art gallery, or I put on the radio. You hear these amazing things. And when I hear or see something interesting, I write it down. You end up with a notebook full of interesting things.

What are you working on right now, as well as being Waterstones Children’s Laureate?

I’m writing a chapter book for younger readers, for around six to nine year-olds. It’s very, very illustrated because I missed drawing so much when I was writing my Ruby Redfort series. So – lots of drawings!

My new Charlie and Lola book, A Dog With Nice Ears, is also coming out in October. You’ll be able to see a preview of it on this website after the summer holidays.

Blogs from current and former Laureates

Bestselling author-illustrator Cressida Cowell is the Children's Laureate for 2019-21: a role given every two years to celebrate outstanding achievement in children's literature.

All about the Laureate