The brilliant award winning author and campaigner Sita Brahmachari, who's work includes the Red Leaves and Artichoke Hearts, became our twelfth Writer in Residence back in 2015. In this blog Sita wrote about working with Amnesty International and using children's books and workshops to help kids learn about human rights. 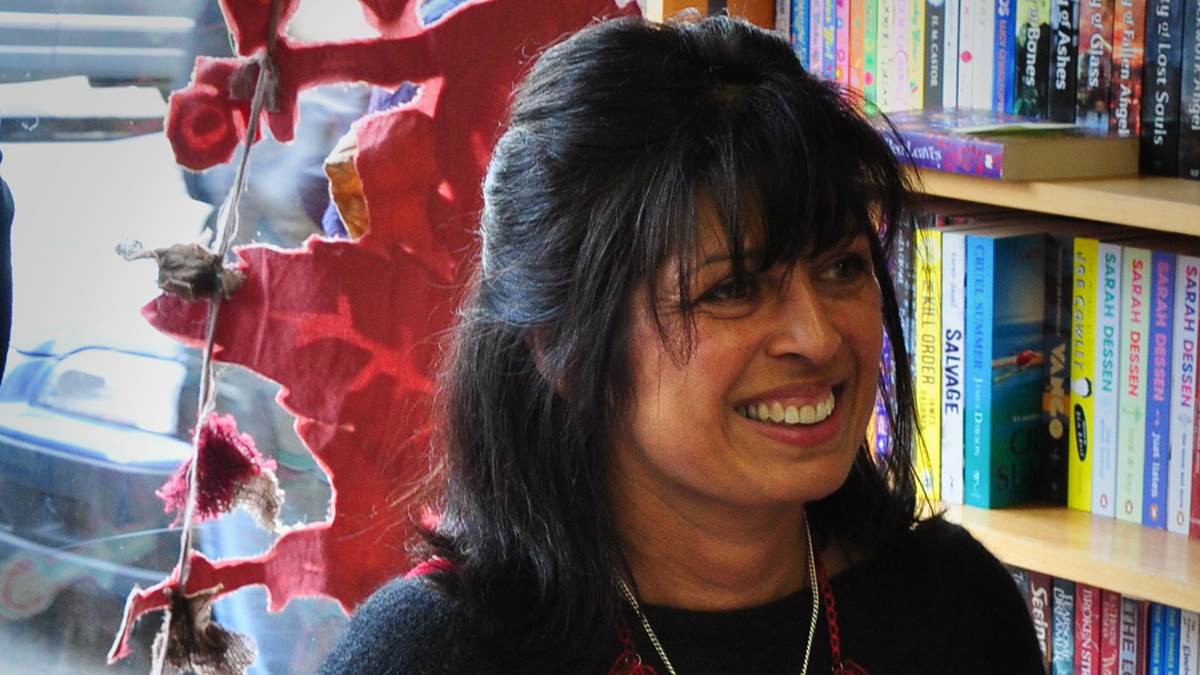 'Dreams of Freedom is a feast of visual stories - brave words and beautiful pictures, woven together to inspire young readers to stand up for others and make a difference.'

- Michael Morpurgo (From the powerful forward to the book)

Today I want to talk about Amnesty International's Dreams of Freedom (published by Frances Lincoln Children's Books on 5 March 2015). You can see some of the beautiful images in the Book Trust review. In this blog I interview Amnesty publisher Nicky Parker about Dreams of Freedom and the books that Amnesty co-publish and endorse.

I wrote a little on the need to find books that help children navigate our world in an article for The Guardian online recently about books to nurture empathy.

Thanks to the contributions of so many people I was helped to begin to build a bookshelf of stories that have human rights at their heart. Dreams of Freedom is a jewel of a book to add to those shelves.

In half term I went to a workshop with Amnesty and Chickenshed Theatre Company to find out more about Dreams of Freedom and how Amnesty Publisher Nicky Parker has collaborated with publishers, educators, theatre makers and artists to explore how stories can help the smallest child understand and empathise with the biggest questions and threats to equality we face in the world today.

Chickenshed workshop leader exploring the words and images of the page in 'Dreams of Freedom' entitled 'Freedom through equality' with words by Chief Standing Bear of the Ponca tribe and art work by R. Gregory Christie. Photo © Marie-Anne Ventoura/Amnesty International UK

The air was buzzing with excitement in Amnesty's workshop room. A sign over the door read 'Art Refuge' (related to a current exhibition of children's art) and this refuge was singing with the enthusiastic voices of children who had worked with Chickenshed Theatre all day towards a performance based on the inspirational quotes and illustrations in Dreams of Freedom.

Dreams of Freedom from Amnesty International on Vimeo.

I was interested to find out about the background of Amnesty's publishing and endorsing of books for children. Here are some excerpts from an interview with Nicky Parker following the Chickenshed showcase.

What's the background to Dreams of Freedom and Amnesty working with Children's Publishers?

'Amnesty's relationship with Frances Lincoln started over a decade ago. I had then recently started working for Amnesty, mostly on traditional human rights reports that had limited and specialist appeal. My own children were quite small at the time and I noticed that many stories we read together were actively engaging with human rights themes. It seemed likely that Amnesty's supporters would appreciate recommendations for children's books, so I started looking for publishers producing books that Amnesty could endorse.

We wanted to test if there was any truth in my idea that our supporters would be interested, so I trialled it by buying in 50 copies of, I think, six children's books and listing them in our magazine to members. It was a calculated risk, but we sold out of all the books within two weeks. And we were off!

Our first proper co-publishing collaboration was with Janetta Otter-Barry at Frances Lincoln on We Are All Born Free: the Universal Declaration of Human Rights in Pictures. Amnesty simplified the complex text of the Universal Declaration of Human Rights so that children could understand it, and between us and Frances Lincoln we commissioned the illustrators.

I never imagined it would have such an appeal. It's now sold over 100,000 copies and is available in 35 languages. I have also worked closely with Gill Evans at Walker Books and co-published the successful story anthology FREE? as well as endorsing many of their books in addition to those published by Macmillan Children's Books, Phoenix Yard, Frances Lincoln, Orion and Hot Key. We've also produced free online education resources on some of these books. (A full list of books is below).

How did Dreams of Freedom come about?

What we did in shaping this book was to develop a long list of different types of freedoms that emerge from our human rights. e.g. the freedom we gain through education, freedom of expression, freedom from fear. Then we looked for a quote for each kind of freedom - but of course it had to be in words that are simple enough for a child to comprehend.

We also wanted quotes from inspirational leaders and activists in different parts of the world. We identified a good selection, including one by Mandela on the freedom to take responsibility, as well as the quote that inspired the founder of Amnesty (about shining a candle in the darkness), because we want to point out that freedom isn't all about individuals' rights, but also about community good. Then we had to secure permissions, which was another job in itself, especially as all the illustrators so generously donated their work for free and we wanted this to be matched by quotes given without charge.

Then between us we and Frances Lincoln approached illustrators, trying to secure a range from different cultural, ethnic, faith and country backgrounds. This is where the partnership with a publisher with shared values is extremely important. For Amnesty, diversity is fundamental to everything we work on - and Frances Lincoln agreed. In the case of Dreams of Freedom, the deliberate selection and combination of quotes and illustrations from such a wide range of people means that the book reflects many different perspectives.

How does Dreams of Freedom sit together with We Are All Born Free?

The books feel like siblings - a combination of powerful words with a range of beautiful pictures. We Are All Born Free is rooted in the Universal Declaration of Human Rights, while Dreams of Freedom probes the meaning of some of those rights and freedoms more deeply.

They are both the fruits of artistic and professional collaboration - and both rely on the generosity of some of the greatest illustrators in the world. We Are All Born Free has had an astonishingly positive response - sales of over 100,000 in 35 languages and countless glowing reviews. All the proceeds of sales go to Amnesty International.

We planned for Dreams of Freedom to come out in the 800th anniversary year of Magna Carta - the Great Charter of Liberties that has evolved through centuries of struggles by human rights heroes into the rights and freedoms we enjoy (in theory) today.

Holding 'Freedom to be yourself'' If I am different I make no apology...' words by Clare Balding. Illustration by Antje von Stemm. Photo © Marie-Anne Ventoura / Amnesty International UK

What is the nature of the collaboration between Chickenshed and Amnesty?

Chickenshed approached Amnesty over a year ago to ask for permission to use We Are All Born Free in workshops with schools. We knew of them as a brilliant educational theatre company, and their reputation for inclusive work is entirely in keeping with our ethos. Their work empowers children in a way that is utterly inspiring.

Chickenshed ran We Are All Born Free outreach workshops in schools across London (usually preceded by a talk in school given by one of Amnesty's volunteer speakers explaining what human rights are). This process culminated in a public performance of the book, with input from 1,000 children from 12 schools. You can see an incredibly heart-warming clip of their work on the Amnesty website:

Chickenshed Children's Theatre brings We Are All Born Free to life

The theatre company is hoping to take We Are All Born Free workshops nationally and we are also in talks about stimulating a similar programme of drama workshops around Dreams of Freedom.

Children standing together to light candles to represent the Chinese proverb that inspired Amnesty's vision 'It is better to light a candle than to curse the darkness'. Photo © Marie-Anne Ventoura / Amnesty International UK

How did the children respond to the material?

Powerfully. The response of children who explored Alexis Deacon's illustration of Aung San Suu Kyi's quote about freedom from fear was especially memorable... A child suggested that the monsters in the picture might not be real, but exist in the little's mouse's imagination.

Ultimately, there is something uplifting about collaboration. It's more than Amnesty and Chickenshed. It's the heroes (living and dead) who have spoken the words and the artists who have illustrated them, the publisher Frances Lincoln, the children who explore and enact, the teachers and parents who encourage it. It's the kind of collaboration that takes an idea, roots it firmly and gives it wings to fly into the future.

A layer of my patchwork landscape quilt. An essential leaf of the artichoke at the heart of children's stories

I see a potent symbol in this publishing collaboration with a theatre company that began with humble roots as a drama group in a disused chicken shed and a dream for all children to be able to express themselves, step into the shoes of others and find inspiration through stories...that's a shared dream written into the very first page of Dreams of Freedom.

'To achieve great things we must dream as well as do.' - Anatole France

Books for children and young people endorsed by Amnesty: